The Challenges of the Western Mediterranean

HR/VP Blog — The Western Mediterranean always has been, and always will be, a key region for Europe. However, in order to develop mutually beneficial relations across the Mediterranean, we will have to successfully bridge the divide growing between its two shores, especially in economic terms. 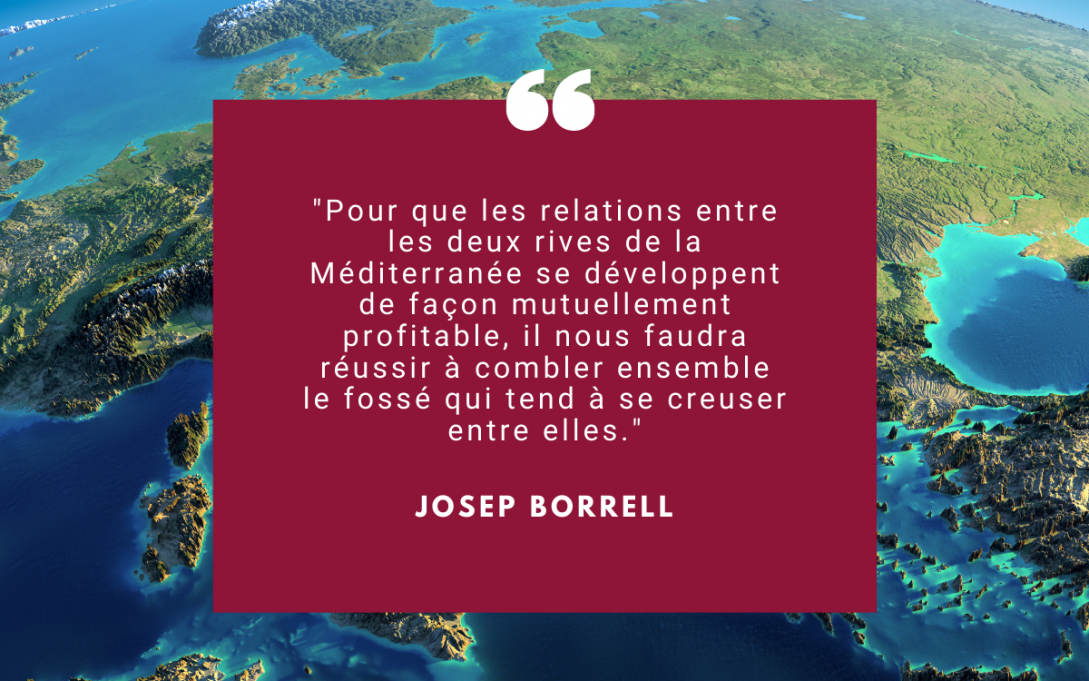 ‘In order to develop mutually beneficial relations across the Mediterranean, we will have to successfully bridge the divide growing between its two shores.’

Last week, I was invited to attend the meeting of Foreign Ministers of the ‘5+5 of the Western Mediterranean’ group. For thirty years, this forum has brought together five EU countries (Spain, France, Italy, Malta and Portugal) and five Southern Mediterranean countries (Algeria, Libya, Morocco, Mauritania and Tunisia).

Despite its informal structure, the forum allows the countries to present their viewpoints and develop partnerships within the Western Mediterranean. This region has played, and still plays, an essential role for the European Union, and will continue to do so in the future.

The growing divide between the EU and the Maghreb

Throughout this meeting, I was overwhelmed by my colleagues’ descriptions of the difficulties currently being faced by the countries of the Southern Mediterranean. The already significant wealth gap between the two shores of our shared waters is widening. The five Southern Mediterranean countries have a total population of 102 million, equal to just under a quarter of the population of the European Union, and yet their combined GDP is 60 times lower than that of the EU. In other words, in the Southern Mediterranean, the wealth generated by each member of the population is 13 times lower than in Europe. Even if the considerably lower living costs on the other side of Mediterranean are taken into account, living standards there are around one fifth of those in Europe.

More importantly, the progress towards closing this gap that we saw up until the mid-2000s has since been reversed: in 2005, average living standards in the five Southern Mediterranean countries were three times lower than in Europe. Today, they are almost five times worse.

The stagnating living standards are not simply down to the economic difficulties in the Southern Mediterranean, they are also due to the region’s dynamic demographics: From 1990 to 2019, the population of the five Maghreb countries increased by 57%, while the population of the EU grew only 6%. Their economies just could not keep up at the same pace.

Moreover, these figures refer to the year 2019. In 2020, the COVID-19 pandemic has had a profound impact on the economies of Morocco and Tunisia, which are heavily dependent on tourism and automotive and textile manufacturing. Meanwhile, Algeria is being hit hard by drops in prices and sales volumes of hydrocarbons. As a result of the crisis, all the countries in the region are suffering from the sharp decrease in remittances arriving from emigrants in Europe.

It will be difficult to prevent political instability and migration towards Europe in the Southern Mediterranean while the living standards there stagnate and the gap between the two shores widens. Therefore, it is in the interest of European citizens to actively contribute to reversing this trend, while of course respecting each party’s sovereignty.

‘The region’s profound difficulties are particularly visible in the “non-Maghreb”, which is actually still one of the least integrated regions, in economic terms.’

There are numerous reasons behind these profound difficulties. However, some of the most important can be seen in the ‘non-Maghreb’. In economic terms, this region is still one of the least integrated in the world: trade between the Maghreb countries is estimated to be at only a quarter of its potential. In 2012, we proposed  a wide range of measures to support regional integration and to encourage closer cooperation with the EU.

Eight years later, bilateral relations have indeed matured and cooperation has expanded to include key issues such as climate change. Nonetheless, the impact of these efforts has been limited. Persisting conflicts and diverging interests between the countries of the region have prevailed over cooperation efforts to address common challenges. This has failed, in particular, to meet the expectations of a growing, young and educated population.

To make matters worse, trade relations with Europe have not developed as hoped. On the contrary, they have noticeably declined since the end of the 2000s. Today, external trade with these countries accounts for only 3% of the EU’s total trade. EU exports to the Maghreb are eight times lower than exports to the United States, for example. Reversing this trend as a matter of urgency

Together, we absolutely must reverse this trend, so that both sides of the Mediterranean can come out of the COVID-19 crisis in a way that is digital, green and fair. Our cooperation with the Maghreb is developing in an international environment that is harbouring more and more uncertainty – as well as conflict: relocation and economic sovereignty have now become important topics all over the world.

‘Europe does not intend to shy away now. Our wish to regain greater economic sovereignty can be seen as an opportunity for the Maghreb.’

However, our wish to regain greater economic sovereignty for Europe could really benefit development in the Maghreb. Indeed, Europe does not intend to shy away now: we must take advantage of our partnership to generate wealth in close connection with our immediate neighbours, and together improve our living standards and increase employment. However, there is still a long way to go, especially in terms of political and economic reform, which is necessary if the Maghreb wants to attract foreign investment.

These persistent economic and social difficulties have gone hand in hand with the political instability reflected, in particular, in the internal conflicts in Libya and the expansion of Islamic terrorism throughout the Sahel. This has led the EU to develop its cooperation with the region in matters of security.

Algeria, Tunisia and Morocco are participating in several European initiatives aiming to combat terrorism. There is also continued cooperation in terms of fighting organised crime. Together with the countries of this region, the EU is finally actively involved in the Berlin process on Libya, led by the United Nations, to help restore peace and stability in the country. Last March, the EU launched Operation IRINI to help enforce the UN arms embargo, but also to combat smuggling and human trafficking.

‘We can be proud of recent developments in Libya: thanks in particular to the efforts of the Maghreb countries, negotiation seems to be the prevailing means of conflict resolution.’

We can be proud of recent developments in Libya: thanks in particular to the efforts of the Maghreb countries, negotiation seems to be the prevailing means of conflict resolution. Negotiation will continue to prevail if Libyans are able to find solutions by themselves. The United Nations and the European Union will provide all the necessary support for Libya’s efforts to reach compromises. However, we are obviously well aware that long-term solutions to these challenges to security will only be possible if we are also addressing their structural causes by means of deep political and socio-economic reform.

Migration must be orderly

Our people and our societies are closely linked; millions of citizens of the Maghreb countries are legally living in EU countries. These countries also face migratory pressures from sub-Saharan Africa. We must further strengthen our cooperation with the migratory countries of origin and transit countries to ensure that migration movements are orderly. This is the aim of the migration dialogues that we are trying to develop with the Maghreb countries, which is made possible by the strong cooperation that already exists in this area.

This informal meeting allowed me to better understand the serious difficulties currently being faced by our Southern Mediterranean neighbours, and the enormous challenges associated with developing our relations. However, this meeting was only an initial step preceding another important event: the Union for the Mediterranean Regional Forum will be taking place on 27 November.

27 November: The 25th Anniversary of the launch of the Barcelona Process.

This year, our partners from all Mediterranean countries will come together to take stock of the 25 years of regional cooperation facilitated by the Barcelona Process. To mark this occasion, the Union will reaffirm its commitment to making the Mediterranean a safer, wealthier and more stable region. I am well aware that the actions taken to this end for the past quarter of a century have only had limited results, and that the task will be particularly tough in the coming months...