Change of Command Ceremony for Commander of EUFOR

The mandate for EUFOR’s Operation Althea is in two parts, Executive and Non-Executive. The Executive mandate is given by the UN Security Council, and the EUFOR mission is then based on the EU Foreign Affairs Council (FAC) Joint Action which includes an Executive part derived from the UN Security Council (Supporting the BiH authorities maintain a safe and secure environment). It also includes and a Non-Executive part (Supporting AFBiH collective and combined training). This supports BiH in its progress to being a ‘security provider’ rather than a ‘security consumer’. 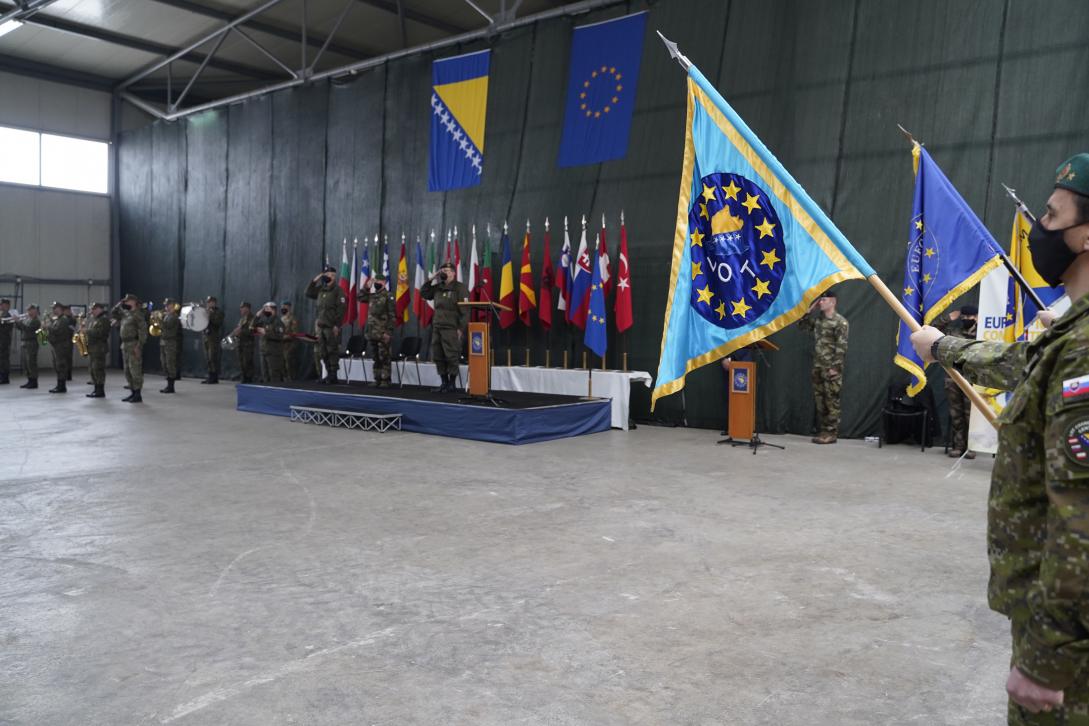 Thursday 20th January 2022 marked the occasion of the Change of Command for COMEUFOR with Major General Alexander Platzer handing Command of EUFOR over to Major General Anton Wessely. The ceremony was attended by the Operational Commander for the EU’s Operation Althea Lieutenant General Brice Houdet and the EU Special Representative to BiH, H.E. Dr. Johann Sattler.

Major General Platzer has led the EUFOR mission since January 2021 and ensured the operation’s continued support to a safe and secure environment in BiH. He oversaw EUFORs tasks of progressing the Ammunition and Explosives Masterplan; secured €10 million in support to the AFBiH Demining Battalion and conducting combined and collective training with the Armed Forces of BiH.

The outgoing EUFOR Commander Major General Platzer said: ‘Coming to Bosnia and Herzegovina I was overwhelmed by the warm and friendly reception I received from the hardworking and honest people who deserve a positive future. EUFOR is present all over the country and well prepared to bring in and to integrate its Reserve Forces from outside the country if necessary. Soldiers of EUFOR, it has been a privlege and an honour to serve with you.‘ Major General Wessely has previously served as Director of Training within the Austrian Ministry of Defence and as the Chief of Staff to the Minister of Defence.

Major General Wessely said: ‘The European Flag expresses ideals of freedom, peace, solidarity and unity of peoples, there is no better goal than to work together to progress these ideals in BiH. My gratitude to Major General Platzer and I look forward to close cooperation with Law Enforcement Agencies and the AFBiH. In one year, I want to stand here and say that my journey has yielded measurable progress for all people of BiH.’