On China’s choices and responsibilities

HR/VP Blog - Russia’s war of aggression against Ukraine requires everyone to take a stand. At last week’s EU-China Summit, we discussed what is at stake and our expectations on China to be part of the solution. The divide in how we see this conflict and the wider world is real, so expectations need to be modest. Principled diplomacy, based on EU unity and strength, remains the best way to shape China’s choices. 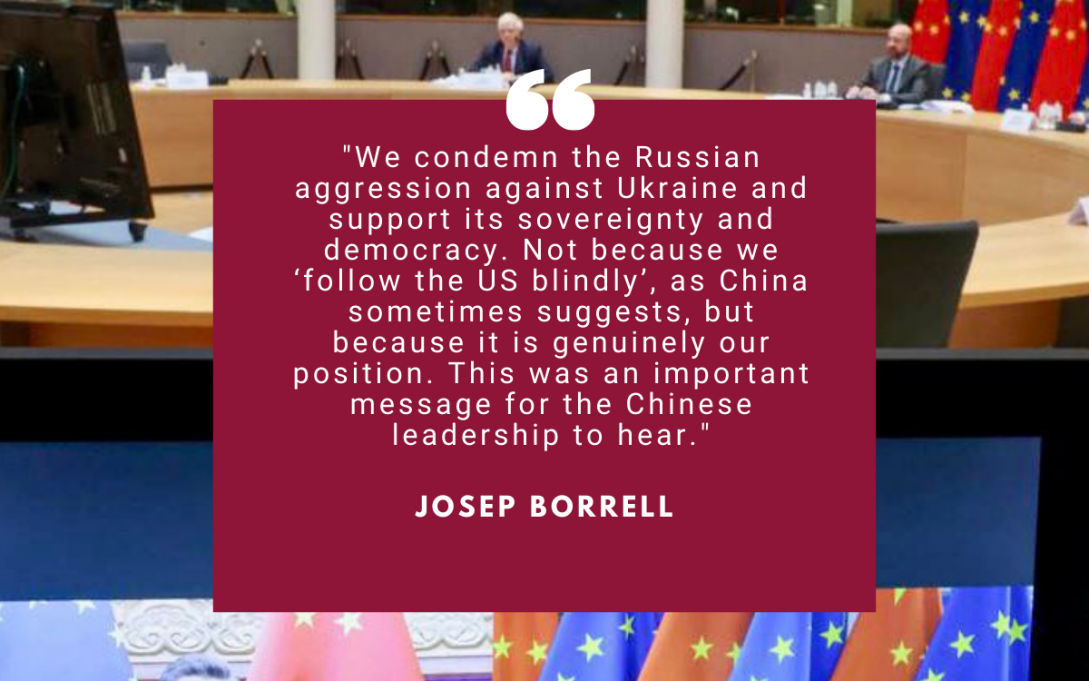 For some years now, EU-China relations have gone through a difficult period, with clashes over human rights (Xinjiang, Hong Kong); China’s regional behaviour (East and South China Sea, Indian border, Taiwan Strait); the persistent problems that EU companies face in accessing the Chinese market; the escalatory use of sanctions against EU officials and bodies; the expansion of disinformation activities and the overt attempt at economic coercion towards Lithuania and the wider EU single market. All these have fed a sense of stalemate and divergence.

In practice, Beijing’s attitude has been one of pro-Russian neutrality. China does not condone Russia’s behaviour – it abstained in the UN General Assembly votes – but it does support Russia’s justifications of the war, i.e. the claim that the root causes lie in ‘Cold War thinking’ and especially NATO enlargement.

Then came Russia’s brutal invasion of Ukraine. For Europeans this is a clear-cut case of aggression: Russia has inexcusably violated its smaller neighbour’s sovereignty and territorial integrity. These are principles that are supposedly sacrosanct in Chinese diplomacy. However, in practice, Beijing’s attitude has been one of pro-Russian neutrality. China does not condone Russia’s behaviour – it abstained in the UN General Assembly votes – but it does support Russia’s justifications of the war, i.e. the claim that the root causes lie in ‘Cold War thinking’ and especially NATO enlargement. China does not use the term war, preferring euphemisms like issue, crisis or conflict. It rejects the use of sanctions. And it likes to apportion equal blame rather than call out Russian aggression, pleading for ‘all sides’ to find an end to the bloodshed.

Russia and China have made clear that they believe that great powers are entitled to a zone of influence in their respective neighbourhoods."

Through their statements and actions, Russia and China have made clear that they believe that great powers are entitled to a zone of influence in their respective neighbourhoods. We instead believe that the UN Charter and the Helsinki Final Act enshrine the right to of countries to make their own, sovereign choices. The joint Russia-China statement of 4 February is, at heart, a revisionist manifesto as I said at the Munich Security Conference on 20 February 2022.

We see the war against Ukraine as a moment of truth where countries have to show their colours, but China feels it can avoid fateful choices. As things stand, it believes it gets a West that is focused on Ukraine and a weak Russia that is making China even more the senior partner with cheap oil and gas on offer, as Europe reduces its energy imports from Russia.

A difficult but necessary Summit

This was the difficult backdrop against which the recent EU-China Summit took place. The fact that there was no joint statement nor any list of ‘deliverables’, was a clear indication that this was not ‘business as usual’.

We condemn Russian aggression against Ukraine and support that country’s sovereignty and democracy, not because we ‘follow the US blindly’, as China sometimes suggests, but because it is genuinely our own position.

As I said in the European Parliament, in terms of tactics, China wanted us to compartmentalise: to set aside our well-known differences over human rights, Ukraine and other issues and instead ‘focus on the positives’. The EU side made clear that this is not feasible: some values are universal and core to how we approach the world. And the same is true for Ukraine. This is not a local quarrel between two countries who are equally to blame. And neither is it a return to the Cold War with two opposing ideological and economic blocs. No, this is a defining moment for whether we live in a world governed by rules or by force. The central question is whether we normalise the illegal use of force or not. Is it OK that someone can just order his army to march into a neighbouring state and try to take what he believes is his? We do not want to live in a world where the use of force is as deregulated as the economy has been deregulated, as Ghassam Salamé the Lebanese scholar and diplomat put it in Le Monde.

We condemn Russian aggression against Ukraine and support that country’s sovereignty and democracy, not because we ‘follow the US blindly’, as China sometimes suggests, but because it is genuinely our own position. This was an important message for the Chinese leadership to hear.

Discussions at the Summit were frank but also serene - a fact that perhaps illustrates that neither side had exaggerated expectations. The EU side called on China not just to support Ukrainian sovereignty and the need for a ceasefire in abstract terms, but to use its influence with Russia to help bring one about and to rule out any active military support to Russia. The Chinese side stuck to general statements of wishing to see peace and de-escalation, but avoiding specific commitments, on getting a ceasefire. It is also important that China reaffirms its opposition to the use of weapons of mass destruction in this conflict.

In all this, there is a major paradox. Our bilateral economic links have never been deeper – EU-China trade is €2 billion every day vs. only €300 million per day between China and Russia – but our political outlooks are ever further apart. This ultimately proves that political and ideological factors overshadow economic ones.

Where do we go from here?

One of the conclusions of this Summit must be that China will, for the time being, not engage actively to bring about an end to Russia’s war against Ukraine. The best we can realistically aim for is that China does not move into a more active pro-Russian stance. But since the Summit we have seen evidence of further Russian atrocities, including in Bucha, which will make a political solution more difficult. China should be involved in any commission of inquiry launched by the UN and will have to pronounce itself one way or the other. We also have to see whether President Xi will finally speak to President Zelensky, which is something that the EU side encouraged at the Summit.

Meanwhile as EU, we have to continue to do all we can to pressure Russia (we have just proposed a 5th round of hard-hitting sanctions), expand our support to Ukraine and handle the wider global fall-out of the war, including the growing risk of food insecurity due to rising energy and commodities prices. We are engaging with African and Asian countries to make clear that this conflict is not a conflict between the East and the West but a conflict that jeopardises the principle of national sovereignty and territorial integrity.

The purpose of foreign policy is shaping the choices of international players. This also applies to China. For the EU the best way to do so is to be realistic, firm and united

When it comes to EU-China relations, probably the most important thing for us is to keep doing our ‘home work’ and strengthen internal EU resilience. In recent years, we have taken significant steps on the defensive side of the ledger (investment screening, 5G toolbox, anti-subsidies, procurement instrument with more to come through the adoption of the anti-coercion instrument). We have also increased our cooperation with like-minded partners on how to address the challenges brought along by China but also to seize the opportunities, when they arise.

We should always keep the door open to engage with China. The Summit was an important channel of communication to pass messages to the highest level in Beijing. Despite all the well-known difficulties, it is important that we recognise that we have a shared interest in managing this relationship in a responsible manner. Climate change, bio-diversity, but also the growing threat of food insecurity in Africa or regional crises like Afghanistan: these are all topics for which we need to try to cooperate with China.

The purpose of foreign policy is shaping the choices of international players. This also applies to China. For the EU the best way to do so is to be realistic, firm and united. Diplomacy implies talking to everyone including those with whom we have sharp disagreements. In its dialogue with China I think the EU truly spoke the language of power.