HR/VP Blog – During my visit to Washington D.C, we cleared the air on the transatlantic agenda and focused on pressing international challenges. A better balanced EU-US cooperation will remain key for international peace, security and prosperity because our values and interests are largely convergent. 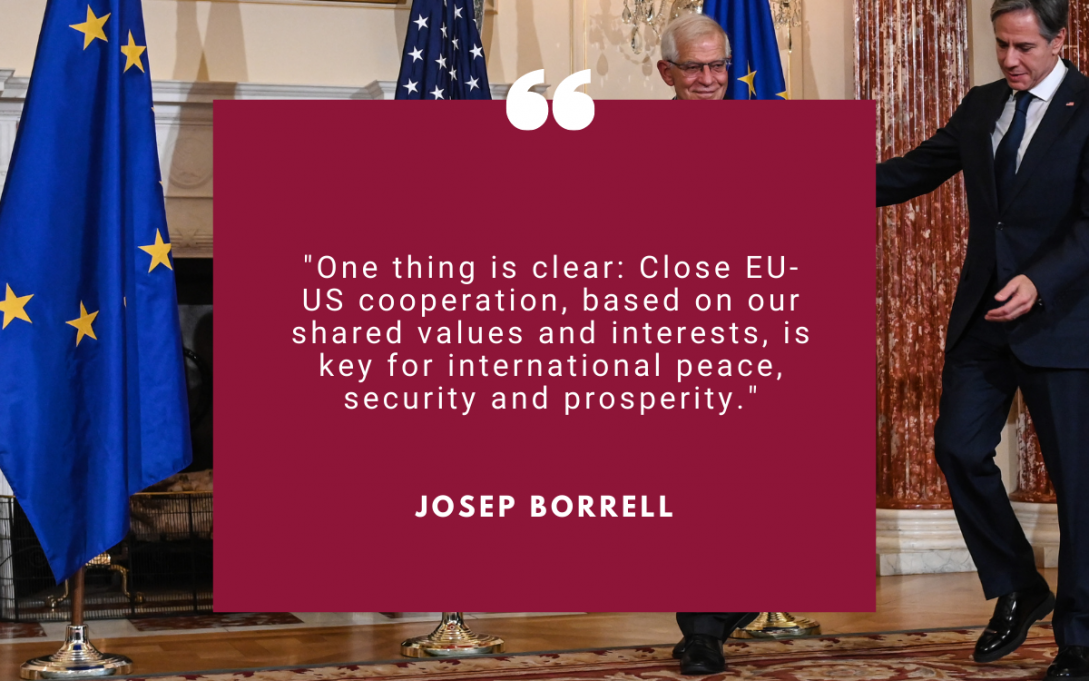 At the end of my two-day visit to Washington D.C. I visited the Arlington National Cemetery and the Lincoln Memorial. At Arlington, the United States honours its military dead, buried with dignity under a multitude of identical headstones.  The national memorial built to honour Abraham Lincoln, the president who abolished slavery and led his nation through Civil War, stands at the end of the Mall. While we currently still see tensions in the American society, these two sites are stark unifying reminders of what it takes to build a democracy and to defend its values and fundamental rights – at home and abroad. And Arlington Cemetery reminds us Europeans of the numerous young Americans that gave their lives on European soil for our freedom, fighting Nazism and fascism, which also laid the foundations of our transatlantic partnership.

The deepening of this partnership was the central focus of my first visit to Washington D.C. since the new Biden administration took office. During my meetings with Secretary of State Blinken and Deputy Secretary of Defence Hicks, we reviewed and worked on the commitments from the June EU-US Summit and discussed concrete projects to reinforce and improve our cooperation.

“The deepening of the transatlantic partnership was central focus of my first visit to Washington D.C. since the new Biden administration took office”.

Since January, we have been working closely together building an ambitious new transatlantic agenda. We do this not only because we are the closest partners in terms of values and as to how we organise our societies, our democracies, and our market economies, but also because friends and allies look at us and expect us to work together to address global challenges. In times of immense geopolitical shifts, the EU and US have a shared responsibility to prevent the international order to slide towards an exacerbated competition among nations. Working together, we have to actively promote a vision of global cooperation based on democratic values that contrasts with that of authoritarian powers, which strive for a very different world.

“Naturally, we also discussed recent difficulties and differences – which also did serve as a wake-up call to deepen trust and improve early warning mechanisms.”

Naturally, we also discussed recent difficulties and differences, including the withdrawal from Afghanistan and the circumstances of the AUKUS announcement. Inter alia, a lack of consultation and communication created real difficulties for allies and did not show the West at its best.  These difficulties did serve as a wake-up call and an impetus to focus more on the need to deepen trust and to improve our early warning mechanisms. Building on the achievements of the last months – such as the outcome of the EU-US Summit and the recent launch of the Trade and Technology Council in Pittsburgh – we were able during my visit to agree on concrete steps to deepen our engagement.

To start, we confirmed our pledge to launch a dedicated dialogue on security and defence by the end of the year. There is no doubt that our security and prosperity will be enhanced by deeper bilateral cooperation in this field. In the same spirit, I was glad to receive again US support for a stronger and more capable European defence as a contribution to transatlantic and global security. As I have said many times: the stronger we become as EU, the better a partner we can be for the US and NATO. We should avoid a divisive, and in my view often artificial, debate on whether we should strengthen Europe’s own security capacities or whether we should do so in NATO. It is a false dichotomy and we clearly need to do both.

“We confirmed to launch a dedicated dialogue on security and defence by the end of the year; our security and prosperity will be enhanced by deeper bilateral cooperation”.

I informed both Secretary Blinken and Deputy Secretary Hicks how we intend to strengthen European defence through the Strategic Compass – which EU leaders have tasked me to develop. It will strengthen our capacity to act and allow us to deal with some threats on our own. This is part of the burden sharing that our American allies have repeatedly asked for, and I stressed again that of course this will happen in cooperation with NATO.

In addition, we agreed to launch EU-US consultations on the Indo-Pacific, to step up transatlantic cooperation and joint engagement in this region. We also agreed to launch a high-level dialogue on Russia, based on our principled approach towards this country. For both, the first meetings are planned to take place before the end of this year. We will also hold the next meeting of the EU-US Energy Council early next year to discuss the current high energy prices, the global Impact of this crisis and the green energy transition.

Finally, let me briefly highlight some other international issues that we addressed:

Overall, I return from my visit to Washington with a very positive feeling of how we will continue to deepen and strengthen a well-balanced transatlantic partnership. The global challenges we face today make it essential and let me end in this regard with a quote from Abraham Lincoln, which struck me when visiting his memorial: “You cannot escape the responsibility of tomorrow by evading it today”.