The Conference on the future of Europe: what do citizens want for Europe’s global role?

HR/VP Blog – The “Conference on the Future of Europe” was launched in Spring this year to open a new debate with citizens to address Europe's challenges and priorities. Listening to citizens and giving them a say is also highly relevant when it comes to foreign and security policy. Citizens are expecting more from us, so we should heed their call for action and results. 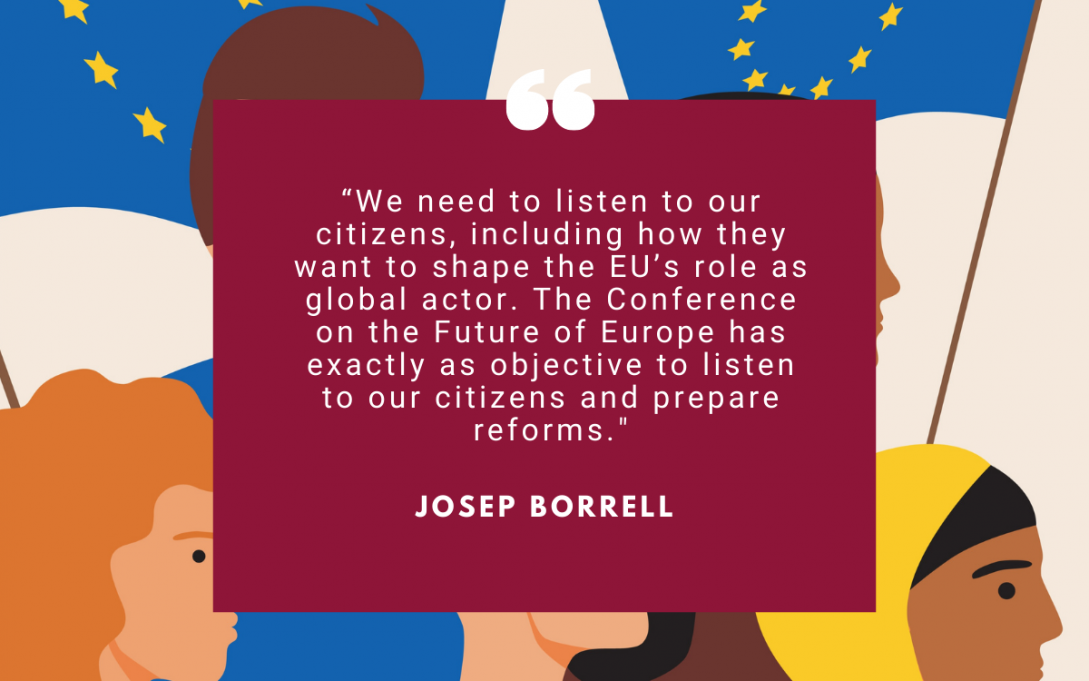 The Eurobarometer and other surveys regularly report that EU citizens attach great importance to foreign policy and security issues - and that a majority wants increased EU involvement in these policy fields. We need to listen to our citizens, including how they want to shape the EU’s role as global actor. The Conference on the Future of Europe, has exactly as objective to listen to our citizens and prepare reforms, as needed.

Citizens will discuss the topic the EU in the World starting on 15-17 October in Strasbourg with a first Citizens’ Panel focusing on this issue. Several more panels on Europe’s global role of Europe will take place throughout the rest of the year. This will then be followed by a Plenary session on 21-22 January in which I will be associated and the purpose there is to discuss the recommendations of the Citizens' Panels.

We can certainly expect some interesting inputs from our citizens on both the what and the how of EU foreign policy. We need an open debate on what our substantive policy priorities should be, in terms of geographic and thematic terms. But also on whether there are new priorities we have to focus on more? How can we become more effective in our decision-making, to take faster decisions?  Can we do better in terms of handling the linkages between the internal and the external dimensions of European policies? And how can we defend our core interests and values when some big powers openly undermine democracy and freedoms? These are some of the big questions that we policy-makers grapple with every day and they are certainly also on the mind of our citizens.

The task could not be more urgent. We need to prepare and position ourselves for the post-pandemic world. Even if we are not yet out of the pandemic, some overall trends are clear. None are fully new, but all have been accelerated by the crisis. The first is that our world is becoming more multi-polar than multilateral, with the strategic competition between the United States and China often paralysing multilateralism. Second, interdependence is increasingly conflictual and soft power is often weaponised: vaccines, data and technology standards are all instruments of political competition. Third, some countries follow ‘a logic of empires’, arguing in terms of historical rights and zone of influence, rather than adhering to agreed rules and local consent. And fourth, the world is becoming less free and democracy is under attack – both at home and abroad. We face a real battle of narratives.

All these trends are a call to action. We Europeans need to respond to these developments,  and decide how to new seize opportunities and face new threats. This discussion cannot wait. We need to find ways to become more united and to build real solidarity among ourselves. This is essential to better defend our interests and values and enhance our leverage in dealing with powers who don’t share our values, and who are prepared to weaponise their assets, from natural resources to supply routes. We should also become more flexible and creative in our partnerships, strengthening coalitions with like-minded partners, while cooperating also with others to pursue common global goals, such as climate action. Finally, we should do better in taking decisions faster and be more coherent in implementation.

In many respects, our citizens are ahead of governments in seeing the need for a stronger EU foreign and security policy. Many Europeans want more results and are ready to invest in achieving that goal, financially and politically. They see that the way we organise ourselves now can lead to delays or lowest common denominator decision-making. We are constantly striving to improve our effectiveness but the rate and speed of change around us is often greater, meaning that in relative terms we are going backwards.

So we should be ready to embrace any good idea on how to do things better. In this context, we are also open to listen to citizens from around the world, particularly our closest partners such as those with whom we share common values as well as those who aspire to become members of the European Union such as for example the countries from the Western Balkans whose future lies in the EU.

By listening and engaging citizens, we can receive valuable inspiration and recommendations. And in a next phase, it will be up to the political leadership, at EU and national levels, to take up these ideas and recommendations - and act upon them.