Debt: the urgent need for a global recovery initiative

HR/VP Blog – During Monday’s Foreign Affairs Council with Development Ministers, we focused on the growing levels of debt that emerging and developing countries are facing due to the economic impact of the pandemic. We must tackle this problem in the coming months to avoid a serious rise in global poverty and inequality. 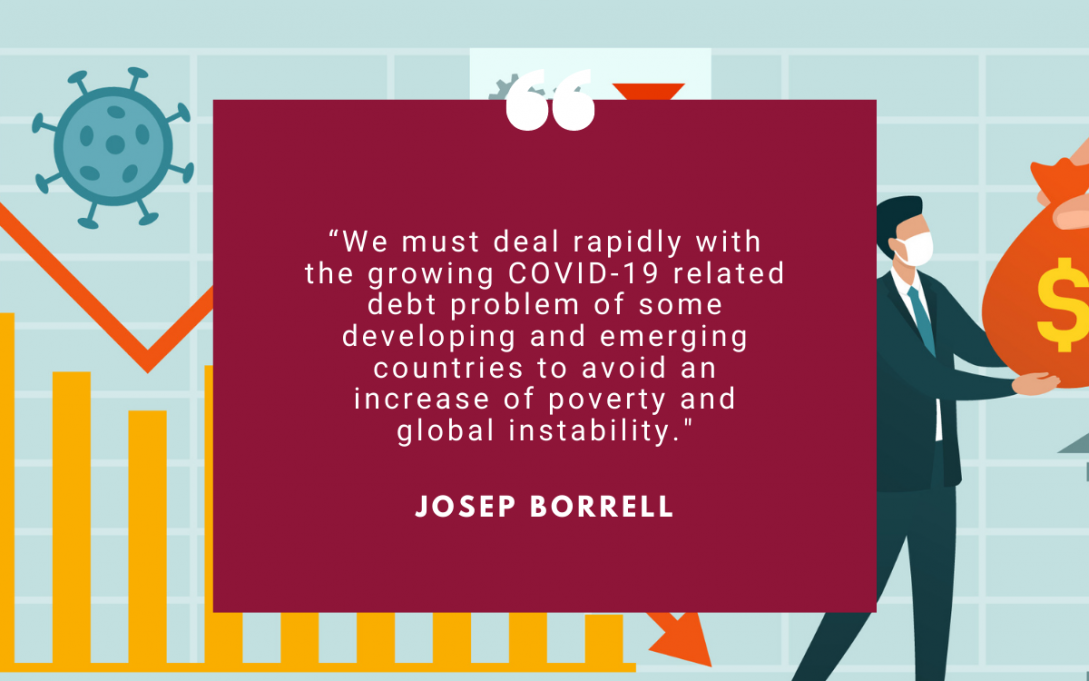 The growing indebtedness of many poor and middle-income countries is worrying. Developed countries have been hit very hard by the COVID-19 pandemic, but the developing and emerging world have much less fiscal space to deal with its consequences and a much more difficult access to funding. Some of them have already defaulted on their external debt. If we are not able to deal rapidly with this debt issue, poverty and global instability are likely to increase. It could even fuel a new global financial crisis.

For our discussion with Commissioner Jutta Urpilainen and Development Ministers on the debt issue, we were joined by Ms Kristalina Georgieva, Managing Director of the International Monetary Fund (IMF), Mr Werner Hoyer, President of the European Investment Bank (EIB), Ms Odile Renaud-Basso, the new President of the European Bank for Reconstruction and Development (EBRD) and Mr Emmanuel Moulin, The Paris Club Chair (The Paris Club is in charge of coordinating the treatment of the debt of over-indebted countries). We benefited also from the insights of Paolo Gentiloni, Commissioner for Economy, who represents the EU at the G20 Finance Ministers meetings.

Kristalina Georgieva presented us a dire global economic outlook: we now know for sure that we are facing the worst recession since the great depression. The IMF projects global GDP to contract by 4.4% in 2020. A partial recovery is expected in 2021, assuming that the prospects of the vaccine will materialise. But this recovery will be uneven, prone to setbacks, and probably particularly harsh for developing countries.

“We are experiencing a reversal in the decline in poverty for the first time in decades, with 90 million people falling back into extreme poverty.”

GDP in low-income developing countries (LIDCs) is estimated to shrink by more than 1% this year, whereas average growth in this group has been above 5.5% per year in the last twenty years. The impact will be a reversal in the decline in poverty for the first time in decades, with 90 million people falling back into extreme poverty. In terms of fiscal support to the economy, advanced economies have deployed 20% of GDP this year, including loans and guaranties, emerging markets 6% of GDP, and poor countries only 2% of GDP. Throughout this year 2020, the IMF has provided financial support to 82 countries, 47 of those being LIDCs. The Fund has in particular increased by 10 what it lends on average to Africa. However, according to IMF estimates, Africa will still face a $345 billion financing needs gap, of which $295 billion for sub-Saharan Africa. We need to close this gap with the support from institutions but also to create conditions for the private sector to step up.

“Africa will face a $345 billion financing needs gap, of which $295 billion for sub-Saharan Africa”

The IMF will expand its lending capacity. The EU has contributed €183 million to the IMF’s Catastrophe Containment and Relief Trust (CCRT), which provides debt relief for the 29 poorest and most vulnerable countries, However the IMF still counts on EU Members States to give more resources to the Poverty Reduction and Growth Trust Fund. The IMF has limited capacity to lend to countries that are most in need. In such cases, capacity development matters as much as financial assistance and Kristalina Georgieva suggested that the EU prioritises this particular aspect. The EU and its associated development banks are committed to work closely on this issue with the IMF. Breathing space for the poorest countries

The pre-pandemic debt levels for many low-income developing countries were already worrying. The G20 Debt Service Suspension Initiative (DSSI), launched last April, has provided some breathing space to the poorest countries. The DSSI was initially foreseen to run until the end of the year. As of November, 46 countries have requested to participate, resulting in about $5.7 billion in deferred payments this year.

“Argentina has again defaulted on its external debt last May and Zambia on 13 November, aggravating the risks of a spiral of sovereign defaults, especially in Africa.”

However it is obviously not sufficient and there has been so far no significant participation by the private sector. Argentina has again defaulted on its external debt last May and Zambia on 13 November, aggravating the risks of a spiral of sovereign defaults, especially in Africa. This could eventually lead to another global financial crisis.

The G20 has taken additional action

Therefore, the G20 has taken additional action at the request in particular of the Union and its Member States. First, by extending DSSI until June 2021, with a possibility to extend it by another six months – something to be decided at the next IMF’s Spring Meeting. Second, the G20 and the Paris Club have agreed on a ‘Common framework for debt treatment beyond DSSI’, enabling the debt restructuring process to be initiated.

“China agreed to the new G20 debt treatment principles, an important step forward. We count now on the same motivation and level of commitment from all partners in this area.”

In recent years, China has become a very important creditor for many developing countries, particularly in Africa. However, it is not a Paris Club member and has not been very proactive on the debt issue until now. China agreed to the new G20 debt treatment principles: this is an important step forward. We count now on the same motivation and level of commitment from all partners in this area.

However, we would like to go further: the EU is advocating to extend the G20 debt treatment framework to middle-income countries in need. We also support a new general Special Drawing Rights (SDRs) allocation, an international money issued by the IMF, to cope with the needs generated by the crisis.

To increase Europe's global weight on this crucial issue, we need also to act more as Team Europe that can harness the strengths of our Member States and of the Union. EU Member States cannot have any real influence if they choose to go alone. In Senegal for example, Team Europe as a whole owns 9% of external debt, similar to the share of China alone.

All Member States have agreed in our meeting that these issues are of high priority. Several highlighted the need to move fast from providing ‘breathing space’ through the Debt Service Suspension Initiative, to deeper restructuring for some countries, and further financial support in many cases. While we need to prioritise low-income countries, especially in Africa, some middle-income countries that face serious challenges also deserve close attention, particularly in Latin America.

As I have said often before, I am deeply convinced of the urgent need for a debt relief initiative at multilateral level (mainly through the G20/Paris Club), accompanied by a concerted diplomatic and economic push to prevent a full-fledged debt crisis. However, debt relief alone is not enough: it has to be part of a renewed model of sustainable financing, especially in Africa.

“Debt relief has to be part of a renewed model of sustainable financing. The EU’s call for a Global Recovery Initiative that links debt relief with investments is key.”

To avoid expanding the gap between those who are ahead and those falling behind, it is crucial to ensure that the future will be green and inclusive, and that everyone can surf on the digital wave. The EU’s earlier call for a Global Recovery Initiative that links debt relief with investments is key here.

The debt problem is here to stay

The subject of debt sustainability for many low and middle-income countries will probably continue to be on our agenda for months. Despite our important internal difficulties, the way we handle this matter, in close coordination with our Member States, will have a decisive influence on Europe's future role in the world and in particular on its relations with Africa.