Defence cooperation: How strategic perseverance will pay off

HR/VP Blog – Today, EU Defence Ministers discussed how to address tomorrow’s challenges and how the EU can become a stronger security partner. The Strategic Compass, the Permanent Structured Cooperation and the Coordinated Annual Review on Defence are key to achieve this objective. 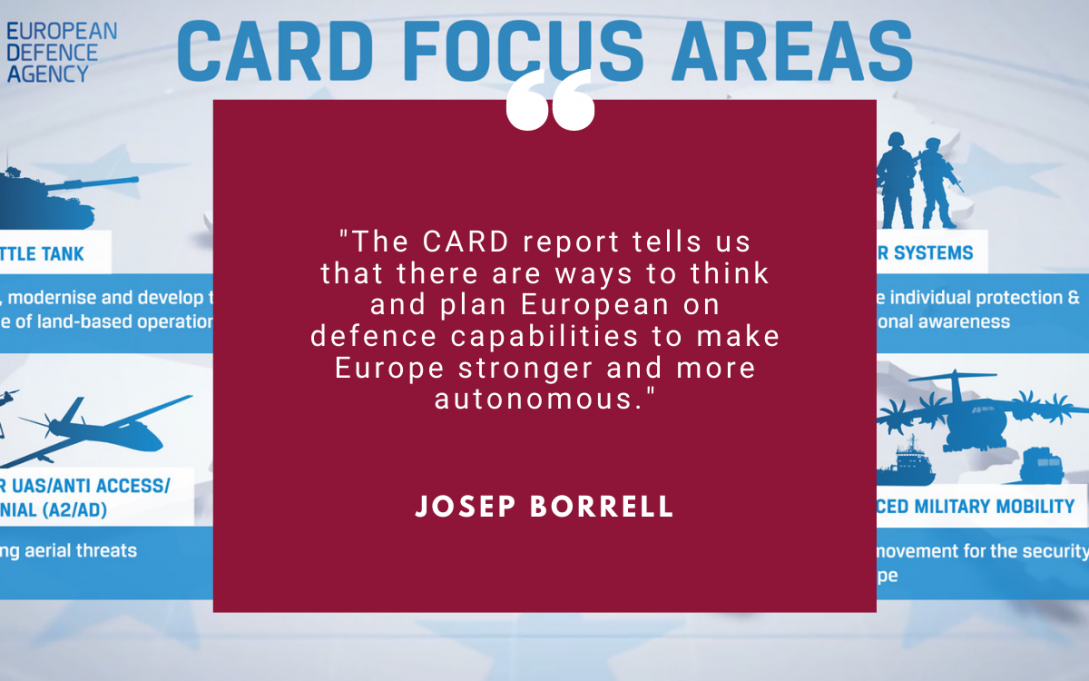 I have said repeatedly in this blog and elsewhere that rising threats to EU’s interests and security call for stronger EU defence. This is not an ideological statement, it is common sense. And it urges us to take our collective security into our own hands, to shape a world order that respects our values and interests, to protect our prosperity and our citizens. This year we made some important steps forward towards enhancing the EU’s strategic autonomy and becoming a stronger global actor. In our meeting with EU Defence Ministers today, we focused in particular on three major defence initiatives.

This year we made some important steps forward towards enhancing the EU’s strategic autonomy and becoming a stronger global actor. In our meeting with EU Defence Ministers today, we focused in particular on three major defence initiatives.

In 2017, 25 EU Member States decided to make use of a possibility foreseen in the EU Treaty to step up their engagement on defence cooperation. By establishing the Permanent Structured Cooperation (PESCO), they signed up to a set of defence commitments and launched collaborative projects – currently 46 in total – to develop capabilities together and be ready to deploy them together. They decided to do so because they had realised that cooperation is the most effective and efficient way to generate the defence capabilities that Europe needs, overcome fragmentation and make economies of scale.

Three years later, Defence Ministers approved the first “PESCO Strategic Review”, assessing the results achieved so far and setting out objectives for the next phase, including a list of 26 projects that will be operational by 2025. This includes very concrete projects such as the Cyber Rapid Response Teams, which will enable several deployable teams to respond to cyber incidents across Europe, or the European Medical Command, a multinational medical structure that will coordinate medical resources for CSDP missions and operations as well as for NATO. Or a more conventional weapon system: the EU Beyond line of sight (BLOS) Land Battlefield Missile, which will enable operators to deliver precision strikes beyond direct sight with the use of drones.

This is exactly what PESCO is about: bringing European defence cooperation to a new level and making full use of the industrial and technological base.

Too often, I hear people saying that PESCO is not delivering or is not concrete enough. The reality is that developing certain types of capabilities takes time – you do not produce a European drone, air defence systems, missiles, patrol planes or a corvette overnight. Still, this is exactly what PESCO is about and is making important contributions to: bringing European defence cooperation to a new level and making full use of the industrial and technological base.

The decision on the conditions for the participation of third states in PESCO projects, adopted earlier this month, is another important step forward. It sends an important message to partners and allies: PESCO projects are open to third states when they meet certain conditions and bring added value. And this in turn strengthens PESCO itself as framework for cooperation at EU level, as it opens new opportunities.

Another important development this year is the launch of the “Strategic Compass”. I have already wrote about it earlier. What is new today is that we have completed the first step: the threat analysis. Over the last few months our EU intelligence service has compiled an analysis of the threats and challenges affecting Europe’s security, based on inputs from the 27 Member States’ civilian and military intelligence services. It is the first time we do such an exercise at EU level. And this is a very important step forward towards the consolidation of a common strategic culture: the more we develop a common understanding of threats and challenges we are facing, the better we can prepare to tackle them.

This analysis provides a comprehensive overview of the threats and challenges Europe is facing and will face in the next 5 to 10 years.

This analysis provides a comprehensive overview of the threats and challenges Europe is facing and will face in the next 5 to 10 years, ranging from global risks like weakening multilateralism, globalisation slowing down, growing rivalries between global powers and environmental security impacts to risks associated to use of disruptive technologies, cyber attacks, (dis)information operations or terrorism. It analyses also more specific threats related to an increasing number of regional powers seeking influence, or emanating from failing states and inter-state tensions.

One message comes out from this analysis loud and clear: strengthening the EU’s security and defence policy is not a luxury; it is a necessity. The challenges are truly daunting and they can only be addressed by providing a collective European answer. Therefore, we need further increase our operational effectiveness, our resilience as well as our civilian and military capabilities, while also working even closer with our partners.

This is precisely what we intend to do through the Strategic Compass and Ministers reiterated today their determination and commitment to do so. In the coming months, intensive work will be conducted to shape concrete objectives across the entire spectrum of our security and policy agenda. Drawing out all the conclusions from this consultative process, EU member States will adopt the Strategic Compass in early 2022. This is a major endeavour that will chart the way ahead for European security and defence for the next years.

Lastly, as Head of the European Defence Agency, I presented to Defence Ministers the 2020 Coordinated Annual Review on Defence (CARD) Report.

CARD report tells us that there are ways to think and plan European on defence capabilities to make Europe stronger and more autonomous.

The report provides the first comprehensive overview of the European defence landscape, including capability development, R&D efforts and defence industry. This mapping clearly highlights that our defence sector is still way too fragmented and needs convergence. Just a couple of illustrative examples: while the US have 1 main battle tank, in Europe we currently operate 16 different types. In the maritime domain, we operate 30 different types of corvettes, frigates and destroyers – compared to 4 surface battle ships in the US. On the operational side, CSDP engagement in terms of personnel and expenditure barely represents 7% of the total operational commitments of Member States. So yes, much more needs to be done.

But what the CARD report also tells us is that there are ways to think and plan European on defence capabilities to make Europe stronger and more autonomous. In fact, the CARD report identifies six very concrete focus areas for joint investment and cooperation – from Main Battle Tank and Patrol Ships to Countering drones, Defence in Space and Military Mobility. It further identifies over 100 concrete collaborative opportunities in capability development and research & technology. These are opportunities for cooperation that can be further pursued in the framework of PESCO and could potentially benefit from the European Defence Fund.

All three defence initiatives have huge potential. Just like other European policies, European security and defence will ‘not be made all at once or according to a single plan. It will be built through concrete achievements which first create a de facto solidarity’. 2020 brought compelling evidence that we are making steady progress on European defence, step by step, with strategic perseverance.