Defence innovation or defence irrelevance is the choice to make

HR/VP Blog - Last Tuesday, I opened the Europe Defence Agency’s Annual Conference, dedicated this year to defence innovation. This conference came at a crucial time for the future of our common European security and defence policy. In that field, our choice is a simple one: either defence innovation or defence irrelevance! 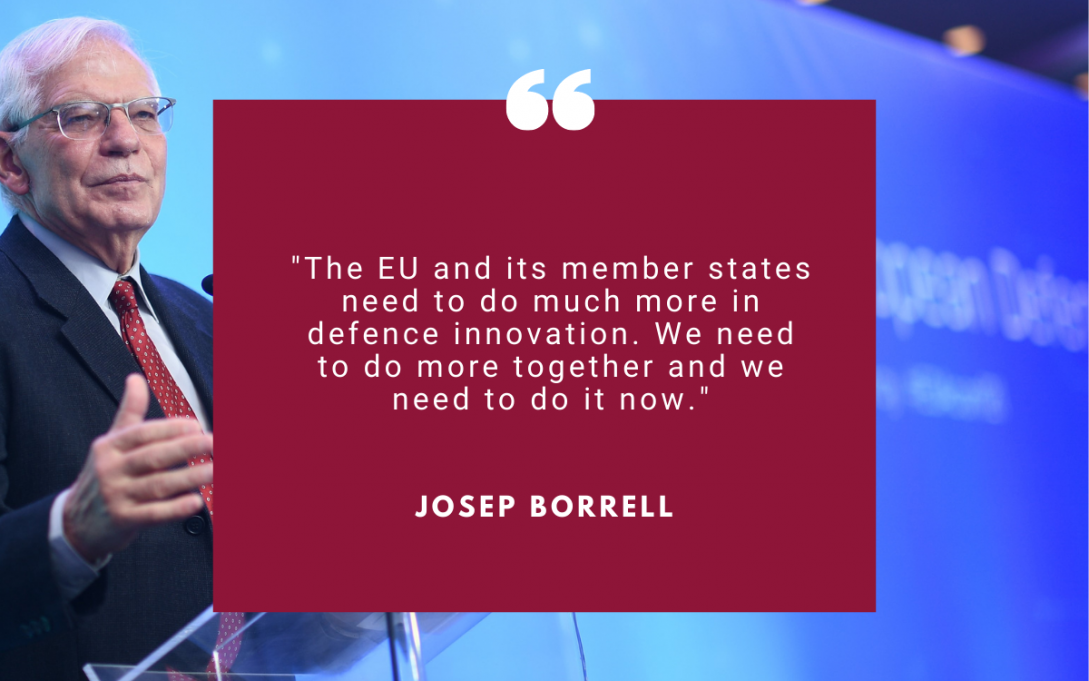 As we see at all our borders, the return of power politics globally requires that the EU becomes really a security provider. Our collective ability to innovate, both at EU and national level, will determine the position of the EU on the global stage in the years to come. This is true in general, but it is especially true in the defence sector.

This is why defence innovation was the central theme of this year’s European Defence Agency’s (EDA) Annual Conference, which brought together EU member states and institutions, military and security organisations, academia and think tanks, as well as industry and media. We, the EU and its member states, need indeed to do much more in defence innovation. We need to do more together and we need to do it now.

Why we must invest in defence innovation

Technological innovations have always been decisive factors in international rivalries: from the fortifications in 17th century Europe, to the naval rivalry between great powers on the eve of World War I, the use of radars by the UK in 1940, the nuclear revolution after 1945, the missiles during the cold war and the 1991 Gulf War with battlefield impact of Precision Guided Munitions…

“Today, innovation is again front and centre in the global competition that re-structures the international security environment: those who gain a technological edge today will dominate the future.”

Today, innovation is again front and centre in the global competition that re-structures the international security environment: those who gain a technological edge and set the standards today will dominate the future. This is particularly the case with the emerging disruptive technologies (EDTs), such as artificial intelligence. Often “dual-natured”, i.e. both affecting civilian and military domains, they will alter profoundly the character of warfare.

Countries around the world are developing and operationalizing EDTs for military purposes. In particular, the US, but also China and Russia. To retain an edge over competitors and potential adversaries, also the EU and its member states must harness the potential of EDTs and develop high-end, cutting-edge capabilities to equip full-spectrum military forces.

This brings me to a complex issue: the link between civilian innovation and defence innovation. The defence sector has always been at the forefront of innovation and some of its inventions have had tremendous civilian implications: naval technology, the Internet or space-based navigation systems such as Galileo and the GPS, and many other.

However, there are now fields like information technologies where the civilian market is driving both pure technological innovations (processors) and innovative uses (smart phones). Civilian and defence innovation are now increasingly often associated and revisionist powers but also non-state actors do not accept restrictions on how they weaponise civilian technologies. They rely a lot on innovative uses of civilian technology for their hybrid attacks – the cyber domain is an obvious example of this worrying trend.

Space is another telling example: what until recently had remained a mostly sovereign and non-commercial domain is moving into “new space”, where constellations of “cube sats” build up by private actors can be misused for hybrid, hard-to-detect aggressions.

The current situation in Europe gives reasons for concern

The current situation in Europe gives reasons for concern. Comparing the EU and its member states with other global actors, we lag behind in terms of investing in defence innovation. And the gap is widening. Latest EDA data suggests that in 2020 EU member states spent only € 2.5 billion on research and technology – 1.2% of the total European defence expenditure, with a tendency to further decrease in 2021-2023, whereas the related PESCO commitment sets the bar at 2% of the defence budgets. While most member states have increased their defence spending, they have not increased their investments in research and technology.

Meanwhile, the US Department of Defence invests at least $14 billion each year in research and innovation, around 2% of the whole US defence budget, including $3.5 billion for DARPA (Defense Advanced Research Projects Agency). It is not strictly comparable, but Google alone spends on research and development almost 10 times more than what EU defence ministries spend together on research and technology.

“We can no longer afford to sit on the side-line. The EU and its member states need to do much more on defence innovation. And do it more together.”

We can no longer afford to sit on the side-line. The EU and its member states need to do much more on defence innovation. And do it more together. Let me repeat, our choice is a simple one: defence innovation or defence irrelevance!

How can the EU best address the defence innovation gap?

How can the EDA and EU institutions best address this defence innovation gap? The Commission has already put in place relevant initiatives in this context. For example, Horizon Europe is heavily focusing on boosting innovation and the Action Plan on Synergies will enable stakeholders from civil, defence and space industries to work together. The European Defence Fund is also mobilizing €2.7 billion for this purpose.

At the same time, defence remains however primarily an intergovernmental domain and, therefore, the EDA has a crucial role to play in coordinating member states’ efforts. Technological innovation has been part of the Agency´s DNA since its creation in 2004. EDA’s first ever Coordinated Annual Review on Defence (CARD) in November 2020 proposed over 100 collaborative opportunities in capability development and research & technology.

The EDA has already delivered on innovation, for example with projects related to drone swarms, technologies for electromagnetic railgun, directed energy weapons, or new clean energy technologies that will help lower the defence carbon footprint and decrease energy dependencies in defence sector. In response to the call by the Council last May to enhance efforts in that field, the EDA has also been working to establish a Defence Innovation Hub within the Agency. This is one of the deliverables of the Strategic Compass. By creating a network of defence innovation centres around Europe, this hub would promote synergies with the industrial sector. I discussed this proposal with Ministers of Defence at our last EDA Steering Board in November and I hope it will soon be in place.

Within the EU as well as within NATO, our member states have only ‘one single set of experts’, so we must avoid unnecessary duplication, and ensure that synergies are developed to the fullest. In the end, what matters is the overall coherence of output and added-value. Working together with the Commission and member states, the EDA is best placed to ensure that defence innovation is not just an ambition on paper, but a reality in practice.

We need political will, leadership and adequate resources

To conclude: the EU needs to invest more in research and technology to maintain its strategic advantage over competitors and interoperability with its partners. This will determine our position in the global stage in the years to come. We have the tools in place to meet this objective and a window of opportunity to accelerate European defence cooperation. What we need now is, as usual, political will, leadership and adequate resources.