Demography and Europe in the World

“Demography is destiny” said the sociologist Auguste Comte: the basic idea is that population trends and distributions determine the future of a country or region. Recently, my colleague Dubravka Suica, Vice-President of the European Commission responsible for demography and democracy, provided us with an analysis of the foreseeable consequences of the demographic changes underway in Europe and globally. This work deserves our full attention, because this subject is both central to the Union's internal affairs and for its place in the world. 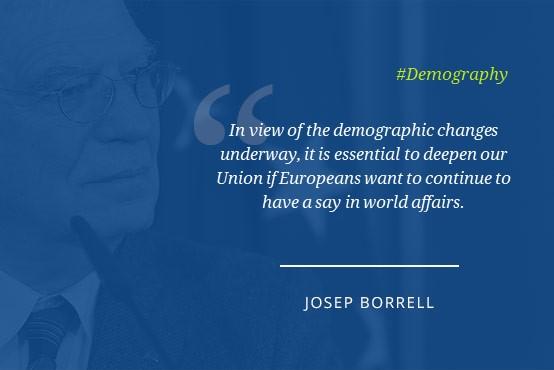 Demographic trends have a strong inertia since they depend for the coming decades on births already registered. However, demographic projections with a 50-year horizon are not an exact science: behaviours can sometimes change more rapidly than expected and diseases such as Covid-19, conflicts or migration can substantially alter the situation. With this caveat in mind, these projections are very useful in preparing for the future.

For a while Europeans are having fewer children than before. With an average of 1.55 children per woman in 2018, Europe is far from the rate of 2.1 children, which is necessary to stabilise European population. Since 2012, deaths exceed births, which means that without migration from outside Europe, our population would already have started to decline.

The EU now has a population of 447 million. According to Eurostat projections, this figure is expected to reach 449 million around 2025, before declining from 2030 onwards to 424 million in 2070. All this is accompanied by significant ageing: the proportion of people over 65 years is set to rise from 20% in 2019 to 30% in 2070. At the same time, the population aged 20-64 (ie those in working age) is expected to decline steadily.

This dual movement will rapidly increase the so-called dependency ratio between the number of people over 65 and the number of people of working age between 20 and 64. Over the next decades, this will constitute a major challenge for our economies as well as the financing of our social and health systems. On this subject, the employment rate of the people of working age, as the specialists say, can however substantially change the situation: hence the importance the Commission attaches to this question.

The Commission's report shows also that there are considerable differences regarding demographic trends between regions within Europe. Some areas, particularly rural ones in Eastern and Southern Europe could probably experience a steady and rapid population decline. Hence the need for active policies, particularly in the field of employment and health, to ensure that demographic change does not exacerbate differences within the Union. The Commission will be working over the next few months on ways of providing more support to the older people and rural regions that are most affected.

A shrinking European share of a growing global population

This report also underlines how demographic trends will affect Europe's place in the world. The world's population is expected to continue to grow from 7.8 billion in 2020 to 10.5 billion in 2070, according to the United Nations' central scenario. In 1950, the population of the 27 countries that make up actually the Union represented 12.9% of the world's population. Today it accounts for 5.7%. By 2070, the EU should weigh only 3.7% of humanity. The contrasting trajectories of the US, China, India and Africa

Moreover, population forecasts for other regions of the world shed light on the main challenges for the EU's external policy over the next half-century.

The population of the United States, whose demography is slightly more dynamic than ours, is expected to catch up with that of the EU by 2070. However, by that time, we would still be in a very similar situation: the United States would account for only 3.9% of the world's population.

China, which today accounts for 18.5 per cent of the world's population, will also see its relative demographic weight decline significantly. By 2070, the Middle Kingdom is expected to have lost 181 million inhabitants and will weigh “only” 12 per cent of the world's population. The median age of the Chinese population, which is 38 years today, is expected to rise to 49 years in 2070. This is even higher than in Europe, where it should reach 48 years by that time.

China will indeed experience a very rapid ageing of its population over the next half-century. While its demographic decline should ease the pressure on the environment in the most densely populated areas, the ageing of the population will undoubtedly be one of the most important challenges for a country that does not yet have a developed welfare system.

By 2070, on the contrary, India is expected to have gained 249 million people and to account for 15.6% of the world's population, almost a third more than China. However, it is not certain that this population growth will translate into a corresponding rise in India's power: it will indeed pose considerable problems in a country with a degraded environment, scarce resources and high internal tensions.

The rise of Africa

What emerges above all from the Commission's report is the demographic upheaval underway in Sub-Saharan Africa. This area accounted in 1950 for only 7.1% of the world's population, half as much as Europe. It now accounts for 14%, more than twice as many as the Union. In 2070 its population should weigh 27.4%, more than a quarter of the world population and seven times ours.

The future of sub-Saharan Africa, his political stability and economic success, will undoubtedly have a decisive impact on how the world of tomorrow will look like. This is particularly true for Europe, which is a neighbour of the African continent and is linked to it by many old ties, even if they have not always been friendly in the past. The future of the EU will depend to a major extent on our ability to accompany Africa's development during the 21th century and contribute to its success.

The demographic trends at work will pose important challenges for Europe both internally and externally. Demographic weight is certainly not the only determinant of the importance of a political entity. In economic terms, the ability to mobilise the entire working age population and the capacity for innovation can make a significant difference. A country like Japan, which has already experienced massive population ageing and has been its population decline since 2009, is nonetheless still a major economic power, particularly in the field of high technology. And regarding geostrategic issues, the weight of a country is no longer measured primarily by its ability to line up large numbers of soldiers on the battlefields.

Nevertheless, in view of the demographic changes underway, in 2070 not a single European country, acting alone, would be able to play a significant role in the world. If Europeans want to continue to have a say in world affairs, it is essential to deepen our Union. Not to impose our will on others, but to preserve our ability to decide by and for ourselves, without having choices imposed on us by others, especially those whose values are not in line with ours.