The essential fight against disinformation and manipulation

HR/VP Blog – Especially during the Covid-19 “infodemic”, we have seen how widespread and how damaging foreign interference and disinformation can be for our security, our democracy and our societies. Addressing disinformation is an urgent necessity. 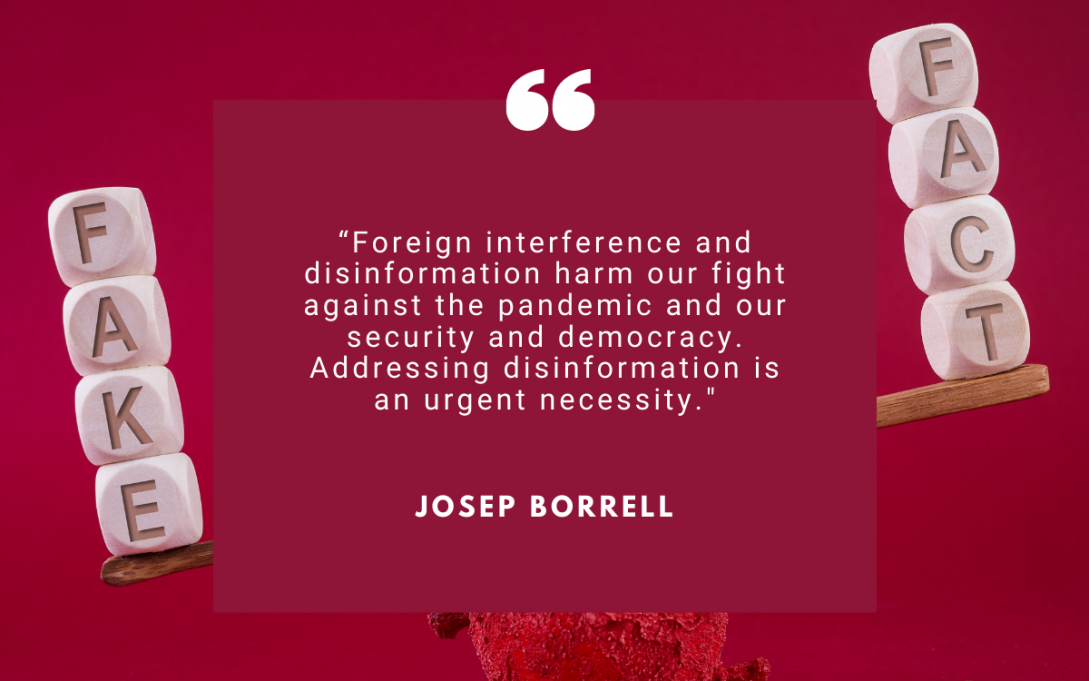 In a recent blog post, I discussed the threats that our democracies are facing in the cyberspace. I have also spoken often about the on-going ‘battles of narratives’. Countries and political leaders are trying to explain their positions and to portray themselves in a favourable light. This is a normal way of acting: in democracies, political leaders have an obligation to communicate about objectives and values. This is why the EU put a lot of effort in explaining our policy approaches and the thinking behind our actions and proposals.

However, some go much further than conducting legitimate ‘public diplomacy’. They present their way of addressing global challenges as the only effective one, while attempting to discredit others. Some foreign actors, be they state or non-state, even engage in disinformation campaigns, deliberately spreading false or misleading information. They do so to weaken us and to harm our ability to respond to crisis effectively.

"Some foreign actors, be they state or non-state, even engage in disinformation campaigns, deliberately spreading false or misleading information."

For example, the Western vaccine developers are openly mocked on multi-lingual Russian state-controlled media, which has in some cases led to as absurd claims that vaccines will turn people into monkeys. Such narratives are apparently directed at countries where Russia wants to sell its own vaccine, Sputnik V. In the current pandemic, any attempt to instigate such unfounded doubts threatens public health. Terrorist organisations, such as Da’esh, have also used the confusion in the Corona-situation to spread their own propaganda.

Disinformation has been with us for a long time

This is not a new challenge: disinformation has been with us for a long time. However, with the possibilities offered by the Internet, it now spreads faster than ever, reaching citizens in their homes every day. Some state actors, like Russia and China, are actively involved in these activities, trying to undermine and delegitimise our democratic systems and the values of freedom, pluralism and checks and balances they are built upon.

The EU has been working on tackling disinformation for many years now. The European External Actions Service (EEAS) has been a pioneer in monitoring pro-Kremlin disinformation, and has then expanded its focus and toolbox. Today, EEAS taskforces focus on three different regions: the East, Southern Neighbourhood and the Western Balkans. We have recently published our 5th Special Report on COVID-19 disinformation, which shows again how much these activities can cause considerable damage during a global health crisis.

The intentional spread of false or misleading information is only part of the challenge. During the pandemic, the fight against mis- and disinformation has been also used by authoritarian regimes as a pretext to limit fundamental rights and especially freedom of expression and freedom of the media.

"We have seen attempts during the pandemic to use the fight against mis- and disinformation as a pretext to limit fundamental rights and freedoms."

Measures range from the expulsion of foreign correspondents to online harassment and in some cases even threatening physical harm. We cannot accept this: freedom of speech and media freedom are a vital pillar of our democracies and we rely also on independent reporting from around the world. If the work of journalists is restricted, we need to take a strong stance.

The EU will protect these principles and respond effectively to disinformation. We often talk about silos that inhibit an effective approach to tackling problems in Europe. In the field of disinformation, we are working every day to increase cooperation across different EU Institutions and member states and develop the EU’s Rapid Alert System (RAS) against disinformation. A network of officials in the EU institutions and the EU member states that are dealing with disinformation related issues to enable common situational awareness and threat assessment and to strengthen coordination with researchers, civil society organisations and our international partners.

Thanks to the cooperation with our international partners like the G7 and NATO, we can track also global trends and prepare for them. Fact-checkers, journalists, NGOs and think tanks are also contributing immensely to curbing the spread of disinformation.

On 2 December, the European Commission presented the European Democracy Action Plan, focussing on election integrity, media pluralism and tackling disinformation. In all of this, we must use a “whole-of-society” response, including civil society, media, academia and private sector (most importantly online platforms and advertisers) to protect our democracies from foreign interference.

We must also increase international cooperation. Europe is not an island: there are no borders in cyberspace. Our attempts to protect ourselves from these threats internally, risk being undermined by manipulative interference launched from countries with weaker regulatory and monitoring capacities.

"We know that we must increase international cooperation."

The EU is offering technical support to authorities and civil society all over the world to build the capacities and oversight that we are developing inside the EU. We are providing assistance for election-related matters, for example helping others monitor online electoral campaigns and promoting initiatives on digital media literacy. The EU is also implementing a project to address COVID-19 disinformation in African countries and the Middle East. We are building partnerships with fact-checkers across Eastern Partnership countries and the Western Balkans, and we keep supporting independent journalism via the European Endowment for Democracy in our neighbourhood and beyond.

As the world’s largest trade bloc, the EU’s normative and regulatory power extends globally. The rules and responses that we put in place within Europe to deal with interference in our democratic life and elections will play an important role in setting global standards. This is especially true for the Digital Services Act (DSA) and Digital Markets Act (DMA), proposed by the European Commission on 15 December 2020. In the fight against disinformation and foreign interference, an appropriate and transparent risk management by large platforms is a crucial step to curbing the spread of false or misleading information and safeguarding civic discourse from manipulative behaviour. In full respect of fundamental rights and freedoms, the DSA and DMA would provide the EU with necessary instruments for a better accountability, transparency and auditability of platforms’ actions.

We still need to do more in the area of disinformation to prevent our adversaries to employ low-cost, low-risk and high-reward tactics to attack our societies and democracies. We must ensure that actors who intentionally disrupt and divide our societies with manipulative tactics will face appropriate consequences. Spreading disinformation must come at a price.