The EU’s corona marathon: moving on all tracks

It is now more than a month that the corona virus has Europe in its grip. While every day we work flat out to address the crisis in all its aspects, it is good to step back and reflect on what living with COVID19 means, for our daily lives, for Europe, for the wider world and how it will affect our society. 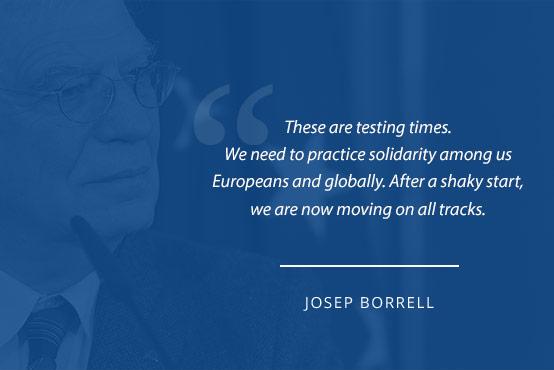 Like so many others, I have spent these weeks locked inside, at home or in deserted offices in Brussels, going from one video conference or phone call to another. They are better than nothing but also frustrating as phone calls and even video conferences miss a key ingredient to make diplomacy work: human interaction. To forge deals, you need to look people in the eye, to engage directly and have a quiet word in a corner. Multilateral diplomacy, inside EU and globally, is difficult at the best of times. Now this is especially true as trust – that magic and necessary ingredient for people to compromise – is harder to build over a video line with poor audio. On the other hand, for some meetings, video conferences can be good enough. And for sure we save a lot of time and money.

There is no point denying, these are testing or even existential times for the EU. As such, it is vital that Europeans see and feel the added value added of their union. We know this has not always been the case and for it happen, the European institutions have to touch people’s hearts as well as their minds. President Ursula von der Leyen did well when this week she presented apologies on the EU’s behalf in the European Parliament to all those, mainly in Italy and Spain, that felt abandoned, with hospitals overcrowded, medical and protective equipment that was scarce and the number of dead reaching almost 1000 a day in each country.

Given the way the EU is set up, it was not surprising that national decisions prevailed at the very beginning of the crisis. Health has been a national responsibility and the capacity for rapid, executive action is much greater at the national level than the European level. But for many Europeans this was nonetheless disappointing. It gave the impression that the EU was not just slow and divided, but offering little concrete solidarity to people at the hour of maximum need. These perceptions may be unfair or incomplete. But they are real in their consequences. Some of Europe’s detractors, inside and outside, pounced on these first-phase dynamics, with some not shy in fanning the flames.

But then, quite soon, a second phase started, with joint decisions on keeping goods flowing across border that were closed and joint procurement of medical equipment. When people talk about or criticise “the EU”, we have to be clear about who is meant. The Commission has done everything possible with the instruments at its disposal, suspending immediately the application of the Stability and Growth Pact rules and increasing possibilities for Member States to use state aid. The European Central Bank also reacted very quickly, much more quickly than during the euro crisis, providing over €750 billion for debt purchases and directing its acquisitions where they are most needed. The Commission has also proposed to offer €100 billion of loans to Member States to help them finance job protection schemes. This is not yet a complementary unemployment insurance at the European level but it is an important step when we risk mass unemployment.

These days, many talk about the need for a “Marshall plan”, as a source of inspiration. But we know of course there is no George Marshall coming from the other side of the Atlantic. Besides, his plan was historically aimed at rebuilding a continent destroyed by war. Even if some compare the pandemic to a war, there is no destruction of physical capital. After an earthquake, you rebuild infrastructures and production capacity. But this is not the case here. Now we have to focus on the immediate needs of health systems, of providing revenues for those who cannot work and extending guarantees and payment deferrals to firms to avoid bankruptcies.

The European Investment Bank (EIB) will offer €200 billion in loans especially to small and medium enterprises. In addition, the European Stability Mechanism (ESM) will make loans available, with interest rates that are close to zero and long repayment terms, to finance expenses that are directly or indirectly caused by the pandemic, without specific conditionality. Beyond that, we are faced with the question of devising new, additional instruments.  The heart of the matter is how Europeans organise solidarity amongst them and which are the limits of this solidarity. Here, it is important we do not only talk about solidarity at the macro, policy level. But that we also point out concrete cases of intra-EU solidarity: millions of masks have gone from France, Austria, Czechia and others to Italy and Spain. These were many more than the ones sent by Russia or China, even if all help is welcome. Patients are being treated in each other’s hospitals, with medical teams flying in from Romania and elsewhere. So this is a pan-European crisis in how people experience it, also on social media, sharing positive stories. It shows a European consciousness exists even if we have to build this narrative and explain more and better what we are doing.

On the external side, through video conferences with EU ministers of Foreign Affairs, Defence and Development, we agreed joint actions along several tracks: working with Member States on the largest ever repatriation operation, bringing over half a million stranded Europeans back home. We agreed to make full use of our military to combat the virus and its consequences and to counter disinformation together.

A top priority has been to work out a joint European approach to helping the vulnerable and worst-affected, especially in Africa, our neighbourhood and elsewhere. Even if the needs at home are massive, it is vital that we help others. Not only out of solidarity, but also because it is in our own interest that the fight against COVID-19 is successful worldwide. We can only be safe from the virus if our neighbours are safe too.

That’s why we have reoriented funds from the EU budget which together with EIB and EBRD loans and contributions from Member States forms a package of €20 billion for the purpose of assisting our partners to handle the pandemic. This is not fresh or new money. But it is a way of giving priority to the most urgent needs. And we have done it with a new framing using the label ‘Team Europe’, meaning Member States and European institutions working together. This has to be used in the future.

The deeper consequences of COVID-19

The first weeks of the crisis have left policymakers struggling. With everything complex, urgent and uncertain, they needed to take 100% decisions based on 50% information. What is positive is that we see respect for science and expertise and people searching for quality journalism. Populists still tap into fear and push their nationalist slogans. However, facts-based policies and collaboration are demonstrably the best way to keep people safe.

With every day that passes, we know more about the virus and our response is getting better. There is an enormous loss of lives but the measures are starting to work. Hospital admissions and intensive care cases are going down. Slowly, but they are. After the immediate crisis management phase, next up will be how we can exit from the lockdown and begin the economic recovery. The road will be long and difficult, but we have more knowledge than when the crisis started. And the next phase needs a coordinated response – in Europe and globally.

Most likely, the crisis is accelerating history by strengthening pre-existing trends. This means more geopolitical competition overall and greater US-China tensions. This in turn will influence how much of a cooperative and multilateral response will be possible with the UN and G20 at its heart. It will largely fall to Europe and other like-minded to lead this effort: to push, cajole and forge the multilateral response that is badly needed. Mobilising all existing multilateral instruments, reforming them where needed and being ready to build new and better ones.

As we head into the next phase, it is important to pose deeper questions. What role will there be for the state, for intervention and protection in the post-crisis recovery? What does the crisis mean for the previous system of economic globalisation? A complete ‘de-globalisation’ seems unlikely but for sure we need more emphasis on security - and health included in that category - meaning building reserves of strategic materials and creating shorter and more diversified supply chains. All this is a new impetus to get serious about Europe’s strategic autonomy.

We also need to think deeply about the consequences for our democratic systems. The crisis could be used to centralise powers and weaken democratic controls - and we should guard against it. We should be clear that the most resilient form of government is the one with checks and balances, where citizens are empowered not ordered. It will be a balancing act to ensure we safeguard democratic values, individual rights and freedoms with the necessary measures to combat the virus and phase-out lockdowns. In this context, it is encouraging to see European scientists collaborating on tracking technology that is privacy compliant.

Handling the corona crisis is a marathon, not a sprint. Those who looked like ‘winners’ early on, may lose their footing later on. And the reverse is also true. After a shaky start, the EU is now fully mobilised on all tracks. The need for solidarity and joint action are recognised across the continent. And our principled choices for multilateralism and partnership are finding echo around the world.

The world after the pandemic is bound to be more fragmented. With many threats that will still be there. My second month of living with the corona crisis will go to addressing those, hopefully with some good old-fashioned personal diplomacy restored.