The EU continues to stand with the people of Belarus

HR/VP Blog – Five months after the rigged presidential elections of 9 August, the European Union continues to stand with the people of Belarus. Last Wednesday I met Svetlana Tikhanovskaya, former presidential candidate and leader of the democratic Belarus. During her visit she received the renowned Sakharov prize. 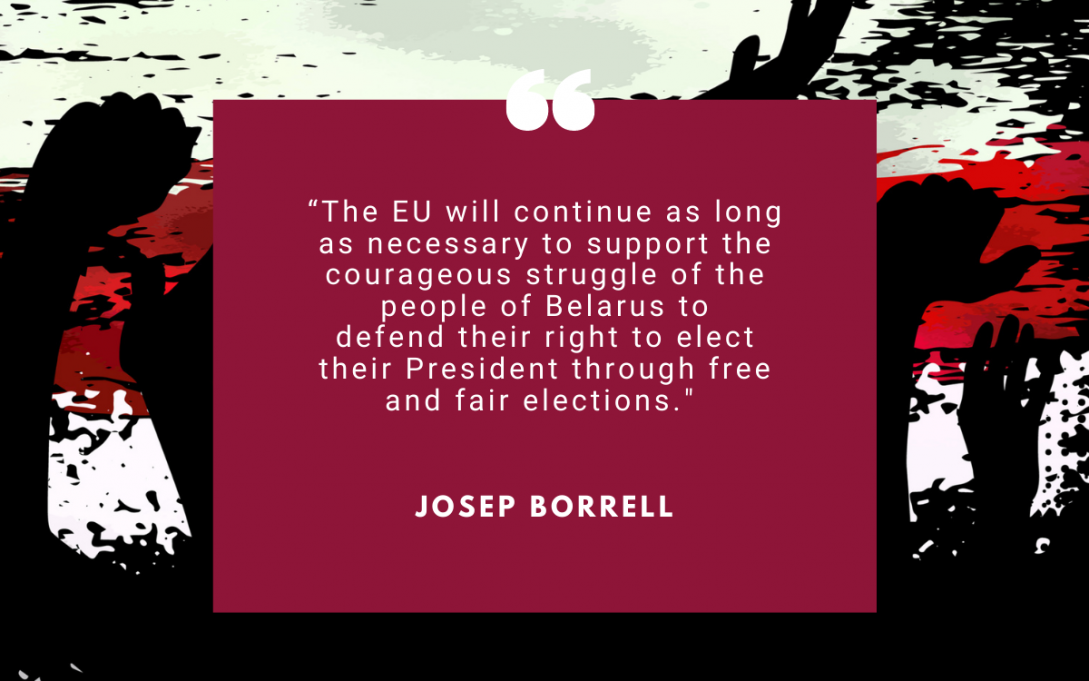 Since August, I have been, week after week, deeply impressed by the Belarusian people’s perseverance and by their courageous struggle for respect of fundamental rights and free and fair elections in Belarus. A courage and commitment to which the regime has reacted with brutality and lawlessness.

Since the rigged presidential election, more than 31,000 people have been arrested for peaceful assemblies including 370 journalists. There are hundreds of political prisoners and more than 900 individuals targeted by criminal cases. The EU Delegation in Minsk has repeatedly asked the authorities for access to political prisoners, to verify reports of deplorable prison conditions and inhumane treatment of detainees. So far, the access has been denied.

Last week, Svetlana Tikhanovskaya was in Brussels, together with other representatives of the opposition, to receive the European Parliament’s Sakharov prize awarded to “the democratic opposition in Belarus represented by the Coordination Council, an initiative of brave women and other political and civil society figures”. Svetlana Tikhanovskaya has become the symbol of hope for a democratic Belarus and awarding this prize was without doubt very timely.

“The EU stands ready to support any credible mediation efforts, in particular within the OSCE framework.”

Since August, Belarus is high on the EU’s agenda and we have been united in our support to the democratic rights of the Belarusian people. A genuine inclusive national dialogue, end to violence and release of all political prisoners, is the only way forward to ensure a peaceful solution to the current crisis. The EU stands ready to support any credible mediation efforts, in particular within the OSCE framework. Until now, Minsk did not accept the OSCE Chairmanship offer to visit the country. However, we will continue to plead for the full implementation of the OSCE Moscow Mechanism report recommendations.

“By now, the EU has imposed sanctions against 88 individuals, including Aleksandr Lukashenko, and 7 entities responsible for the violence and falsification of election results.”

To help find a peaceful solution, the Union had to resort to restrictive measures. A 3rd sanctions package with 36 listings has been adopted last week. By now, the EU has imposed sanctions against 88 individuals, including Aleksandr Lukashenko, and 7 entities responsible for the violence, unjustified arrests and falsification of election results.

In line with our gradual approach, EU member states have expressed readiness and willingness to work on further listings in January if needed. The EU and member states will also continue to address human rights abuses in the international fora of the UN, OSCE and the Council of Europe. Meanwhile, Lithuanian prosecutors launched a pre-trial investigation into a criminal case on crimes against humanity under the universal jurisdiction.

We have also carried out a full review of EU-Belarus relations. As a result, we have scaled down our political contacts and sectoral dialogues with Belarusian authorities, and have suspended or stopped our financial support to central authorities.

Finally, the EU has decided to increase its financial support to the Belarusian population. On 11 December, the European Commission approved a €30 million package: it includes assistance to civil society and independent media (€8M), youth mobility and scholarships (€8M), SME support (€10M) and health support (€4M), including COVID-19 pandemic help. This is in addition to the immediate support to assist the victims of repression and state violence (€2.7 million) and to independent media (€1 million).

“The EU will continue as long as necessary to support the people of Belarus to defend their fundamental right to elect their President through free and fair elections.”

The EU will continue as long as necessary to support the people of Belarus to defend their fundamental right to elect their President through free and fair elections. And it stands ready to substantially step up its engagement and support a democratic Belarus with increased financial assistance and sectorial cooperation.

For this, we need however to have some key conditions in place – the respect for principles of democracy, the rule of law and human rights, and the halt of all repression against persons engaged in the prodemocracy movement, the independent media and representatives of the civil society. I hope, and we will work on it, that these conditions can be met in 2021.