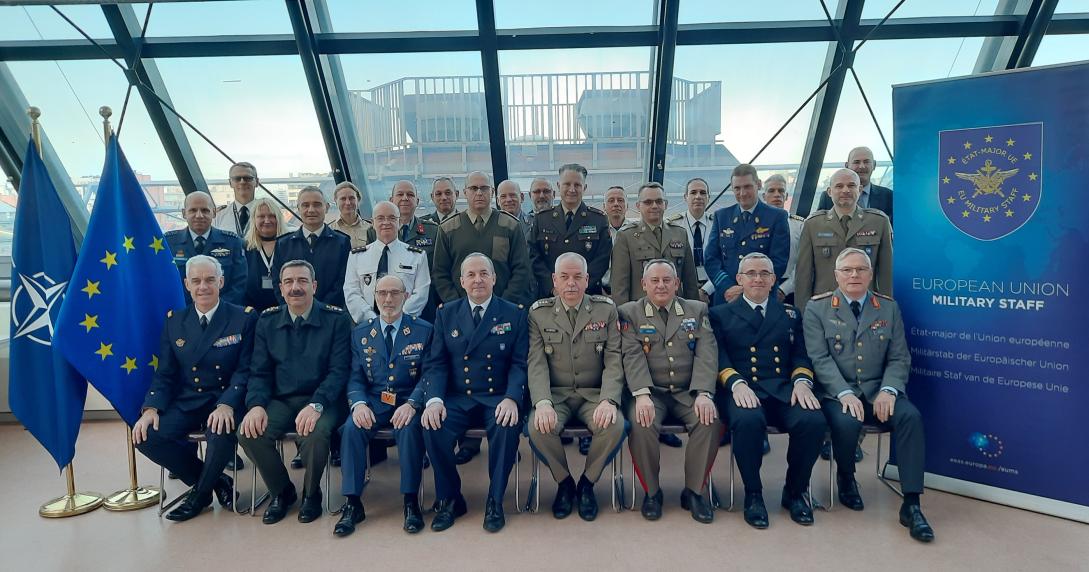 Prior to discussing the recently launched EU Military Assistance Mission to Ukraine (EUMAM Ukraine), Vice Admiral Bléjean reiterated “The EU and NATO stand united in condemning Russia’s actions, and in supporting Ukraine’s sovereignty, territorial integrity and right to self-defence”. In relation to EUMAM Ukraine, Vice Admiral Bléjean specified its aim “to tackle urgent and longer-term training needs that will strengthen Ukraine’s efforts in defending its territorial integrity and ability to effectively conduct military operations in deterrence of Russia.”

Taking the floor, Lieutenant General Janusz Adamczak, thanked the EUMS for hosting the conference and for the ongoing cooperation between both entities. Lieutenant General Adamczak re-emphasised the importance of these meetings as a “part of the broader aims of transforming the relationship between the Alliance and the European Union”, adding that “in these difficult times - the worst since the collapse of the Iron Curtain – NATO and the EU have a responsibility to work together to strengthen the resilience, deterrence and defence of our respective members”.

Lieutenant General Adamczak concluded his remarks by highlighting the aim of the conference,

especially in terms of cooperation and coordination, while avoiding duplication. “This bilateral conference is a key enabler in strengthening the already positive working relationship between the EUMS and the IMS. While NATO remains the foundation of collective defence for its members, a stronger and more capable EU in the area of security and defence positively contributes to global and transatlantic security, it is remains complementary to NATO”, noted Lieutenant General Adamczak.

He then handed over to Major General Gábor Horváth, who introduced the agenda for the meeting, which provides a forum for both Directors General and their respective staffs to report on the progress of the joint work plan agreed by the EUMS and the IMS as well as exchange views and discuss the ongoing cooperation between both organisations. One of the key issues discussed was the implementation of the two strategic reflections, for the EU its Strategic Compass and for NATO, the renewal of its Strategic Concept.

The agenda also featured a briefing by the EUMS on the EU’s Rapid deployment Capability, briefings on various new NATO projects and an update on EU-NATO cooperation by the EEAS Security and Defence Policy Directorate. The meeting concluded with DG EUMS and DG NATO IMS both providing their guidance on the way ahead for 2023.

The next meeting is scheduled in Jun 2023.