NUR-SULTAN – The Regional Conference on 'Enhanced Integration for Prosperity in Central Asia' started today, in Nur-Sultan. The two-day event, organised by the European Union, is an occasion to promote the regional integration among the five Central Asian countries and in line with the new EU Strategy for Central Asia which was adopted in June 2019. 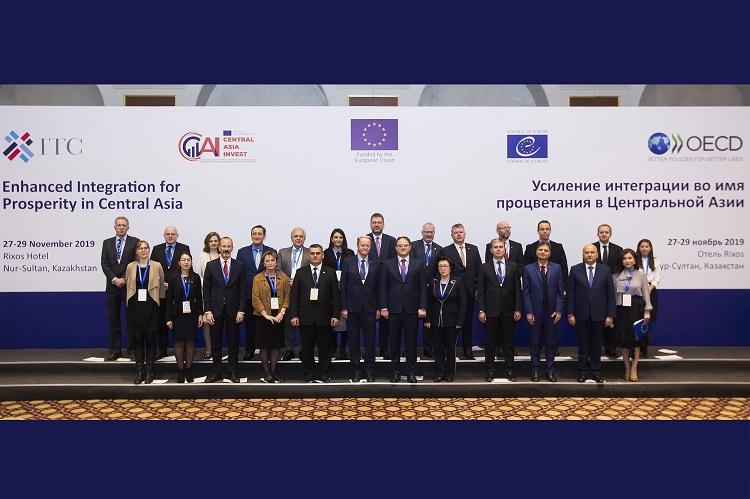 The first day of the conference was marked by the official launch of three EU-funded ambitious multi-year programmes with a total amount of EUR 28 million, that aim to support trade, rule of law as well as investments and growth in Central Asia.

Ambassador Sven-Olov Carlsson, Head of the EU Delegation to Kazakhstan responsible for the management of these three programmes, said: "Today, five months after the adoption of the Joint Communication on EU and Central Asia, we want to move to the next level and invest further in regional cooperation. We firmly believe that an enhanced regional cooperation will allow Central Asian countries to better manage their interdependence, address their vulnerabilities and shared concerns, unlock their economic growth potential, increase influence in international affairs while preserving at the same time their independence and identities. We expect a lot from the programmes we launch today and not only because they represent a significant investment of EU taxpayers' money. But also because we understand the importance and relative urgency the beneficiary countries assign to make progress on diversifying and making their economies more competitive".

During the signing ceremony of the three programmes Ambassador Carlsson was joined by Ms Verena Taylor, Director of the Directorate General of Programmes at the Council of Europe, Mr Ashish Shah, Director of the Division of Country Programmes at the International Trade Center (ITC) and Mr William Tompson, Head of the Eurasia Division at the Organisation for Economic Co-operation and Development (OECD). The Council of Europe, the ITC and the OECD are the international bodies which will implement the programmes.

The programmes launch was followed by a ministerial panel discussions on the challenges outlined in the new EU Central Asia strategy where it was discussed in concrete terms how Central Asian governments, the EU and its partners, and the private sector are moving together from strategy to action. Panellists, including Ministers and Deputy Ministers for Economy and Justice, discussed Central Asian countries’ priorities concerning investment attraction and sustainable and inclusive growth, their plans to enhance their regional and international trade integration and recent efforts to improve the rule of law.

The second day of the event will be devoted to the EU regional programme Central Asia Invest, and will give the grant projects implemented within the framework of this programme, opportunities to exchange lessons learned and achievement and measure them against the regional investment policy framework.

Recognising the strategic role of Central Asia, the EU has for a long time engaged the governments of the region to help foster integration, support sustainable economic growth and promote shared prosperity. Recent modernisation efforts in the region have led to deeper co-operation with the EU on trade, inclusiveness and economic diversification. Building on these developments, the new EU Central Asia strategy was adopted by European Union member countries on 17 June 2019. Among other goals for stronger co-operation, it prioritises the improvement of resilience and prosperity of the region, including regional connectivity, the rule of law, investment attraction and private sector development.

More information on the EU-Central Asia strategy can be found at: