EU-UNICEF: Sending out an SOS as kids go Back to School

On 23 September the EU hosted a #Backpack2School installation by UNICEF ‘Sending out an SOS’, in the heart of the European Quarters in Brussels, as part of a global public initiative on education around the world. EU High Representative Josep Borrell inaugurated the event in Brussels together with Commissioner Dubravka Šuica, UNICEF Director Sandie Blanchet, and local youth activist Quinten. In the midst of the coronavirus pandemic, this is an urgent call for world leaders to act and safeguard the future of our children. "These 200 blue packs writing an SOS here in the streets of Belgium, in Brussels, are here to remind us, the whole world, that hundreds of millions of children are still waiting to put on their school bags again, to receive the education that will determine their future," said Borrell. 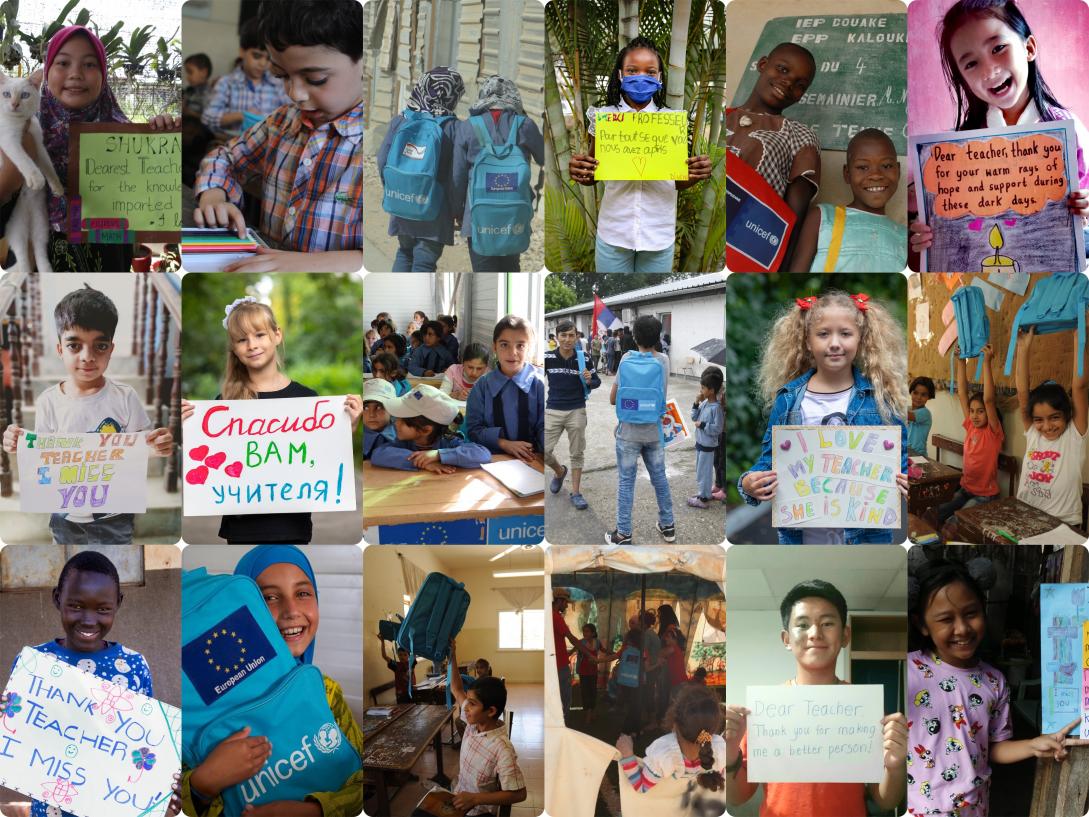 The coronavirus pandemic has caused a disruption to education globally, with more than 1.57 billion students affected in recent months by nationwide school closures, in more than 190 countries. Right now, at least a third of the world’s schoolchildren – 463 million children globally – are unable to access remote learning.

The pandemic has thus shone a light on deep inequalities in access to school, learning outcomes, and digital connectivity, and has exposed weaknesses in our education systems, including inadequate water and sanitation in many schools.

In order to tackle these issues, UNICEF and the EU sent out an S.O.S message from Brussels to the world, to join forces and promote actions to reduce the negative impact of the pandemic on education globally. The S.O.S message installation consisted of 200 UNICEF backpacks, accompanied by the EU Flag, forming an S.O.S sign. During his inauguration speech EU High Represenatative Borrell said "We have to reimagine our future, but also to build our present. You cannot tell people ‘Do not worry, your future will be digital.’ Yes, but what about my present? My future will be very good, but what about my present? Because it is today, it is this afternoon, it is tomorrow morning, when I have needs [that need] to be fulfilled. That is why it is urgent, that is why it is an SOS. It is calling everybody in the world, government, civil society organisations, like UNICEF, to understand that the freedom of education is the best basic tool for the humankind to build a better future. That is why these 200 blue bags are here, in the middle of the European Institutions."

Now more than ever, it is adamant for children and young people to be kept in schools, in a safe environment, where they can learn and deal better with the social and psychological impacts of this unprecedented crisis. Moreover, education funding is under threat and should be protected and prioritized in all recovery plans by the European Union.

Education is essential for economic recovery. If we want to build back better, it is critical to invest in education and ensure that every child learns the skills they need to succeed in life and work.

The EU-UNICEF #Backpack2School installation in Brussels took place during the week of the UN General Assembly in New York, and on a special year for the UN, its 75th anniversary.

The initiative was launched in New York on 1 September during a ‘Generation Unlimited: Connecting Half the World to Opportunities’ event that called for urgent action and investment to bridge the digital divide and scale-up digital learning and skilling opportunities.

Earlier this year, on 9 June, EU High Representative Josep Borrell held a phone call with UNICEF Executive Director Henrietta Fore during which they focused on the impact of the coronavirus pandemic on children and agreed to jointly promote the education of children, including digital learning as a priority. “School is the most important equality producer in the world” said Borrell. The SOS joint activity on 23 September reaffirms this message.

"Education is an equality builder.