EU #Women4Security – building a secure world for all

Women play an important role as agents for change within their communities. Their experiences and perspectives are crucial in crises management, conflict resolution and peace-building processes. Promoting women’s meaningful participation and gender equality is a key objective of the EU, including of its foreign policy. Gender mainstreaming is a guiding principle of the EU’s 17 CSDP missions and operations, which work to make crisis management more effective and build a more secure world for all. 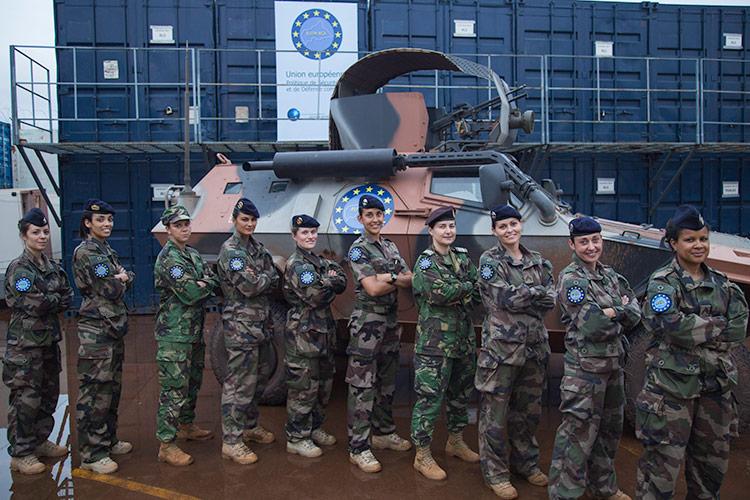 Twenty years ago, the United Nations Security Council adopted the historic Resolution 1325 on Women, Peace and Security (WPS). This resolution addressed for the first time women’s unique experiences in conflict and crises, including increased risks for gender-based violence. The Resolution also emphasised the important contributions women make to peacebuilding and conflict prevention, resolution and transformation.

With the adoption of the resolution, international actors were urged to promote women’s meaningful participation in all efforts to prevent and resolve conflict, and to ensure the protection of women and girls from all forms of gender-based violence. They were also called to increase the representation of women in international peace operations and ensure that a gender perspective guided all aspects of their work.

Since 2000, a further nine resolutions related to Women, Peace and Security have been adopted by the Security Council, strengthening and reinforcing this broad framework.

The European Union (EU) is fully committed to promoting and implementing the Women, Peace and Security agenda as lined out in its EU Strategic Approach to WPS and its Action Plan, which recognises gender equality and women's empowerment as a prerequisite for dealing with the prevention, management and resolution of conflicts.

Currently, around 5000 women and men work in the 11 civilian and 6 military crisis-management missions and operations, which the European Union deploys under the framework of its Common Security and Defence Policy.

Promoting global stability, assisting our partners in addressing their security challenges and enhancing their resilience are key components of the EU's foreign policy, as is the promotion of core values such as the respect for human rights and gender equality.

Promoting Women, Peace and Security is key to increase the operational effectiveness of EU security action and achieve more comprehensive and sustainable results in crisis-management and post-conflict stabilisation.

The reform of the security and justice sectors is key to ensure stability and sustainable peace in conflict-affected regions. However, such transformation can only be successfully achieved if the rights, needs and perspectives of the entire population are considered and addressed. With women constituting half of the world’s population, their participation, experiences and perspectives are paramount to a fully inclusive and integrated approach.

Working with an integrated gender perspective positively contributes to the achievement of the objectives of crisis-management missions and operations through improved situational awareness and comprehensive understanding. It also fosters a more comprehensive engagement with different parts of the population and strengthens the credibility of a mission by clearly signalling the EU’s determination to promote solutions that benefit all: men, women, boys and girls.

The EU’s CSDP missions and operations promote actively the principles of UN Resolution 1325 with tangible effects on the ground. Through systematic mainstreaming of a gender perspective, our missions and operations help create opportunities for gender transformative policies and actions, addressing structural inequality and gender-based discrimination in the security sector and judicial reform of host countries.

They also advise and support local counterparts in developing and implementing policies and strategies to enhance the representation of women in law enforcement, security and justice institutions. And they identify and address gender inequalities, supporting gender-responsive approaches when women seek security and protection. For instance, activities of missions and operations include advising and training local counterparts on international standards, as well as promoting survivor-centred responses to the handling of sexual and gender-based violence. Beyond that, missions and operations promote women’s meaningful participation and empowerment through an active engagement with civil society and women’s organisations in security sector reform processes where trust-building between security actors and local population is important.

The cooperation and coordination with EU delegations, member states and other international partners, as well as local civil society organisations, is paramount. That is why the Women, Peace and Security agenda has become part of the strategic frameworks of both the EU-UN and EU-NATO cooperation on crisis management.

The EU is committed to improve its internal gender balance within the EU institutions, including in CSDP missions and operations. Currently, women constitute 24% of international staff in civilian missions, while in military missions and operations women make up 7% of total staff. Efforts to ensure gender balanced teams is an important element since diversity enhances the effectiveness of the missions. It is also important for the image of the missions, to set a good example and show that women are represented at all levels and in all functions.

A gender perspective is considered a cross-cutting element to be integrated in all aspects of the mandate delivery. A range of specific projects and activities related to human rights and gender equality are carried out in parallel. In addition, dedicated Gender Advisers and focal points are strategically positioned in all 17 CSDP missions and operations to facilitate gender mainstreaming, while the overall responsibility for gender mainstreaming lies with the Heads of Mission and Commanders.