Europe stands with Sudan and its youth

Making sure that a democratic transition succeeds is never easy, even at the best of times. Last year, Sudan embarked on a journey towards democracy, with the country’s youth and women paving the way. They wanted a better future for their country, after many years of dictatorship, abuses, mismanagement and corruption. 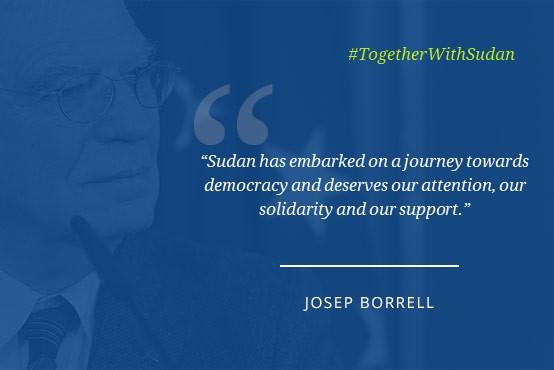 We live in turbulent geo-political times. Understandably, our attention is drawn to negative or worrying events. Therefore, when there is an important and positive development - like a democratic and pacific revolution - we should acknowledge it and support it. Sudan is a case in point. It has embarked on a journey towards democracy and it deserves – but also needs – our attention, our solidarity and our support.

The youth blowing the winds of change

Sudan’s population is very young with an average age of under 20 years. This means that at the moment when the Sudanese people took to the streets to peacefully protest against 30-years of dictatorship, most of the country’s population had never experienced anything different. Nevertheless, they mobilised for a change for freedom, peace and justice.

When I visited Sudan last February, during my first mission to Africa, I met with lots of  students at the Khartoum University. I had the chance to listen to them, pay tribute to their action and tell them in person how they – the young women and men of Sudan – had shown the world that ‘people are power’ and that political change can be both peaceful and successful.

Sudan to take up a leading role for regional stability

We want Sudan to play a strong role in the region, fostering greater regional cooperation and stability. This is especially important in light of the serious security conditions all around - in Libya, Somalia, South Sudan and the Central African Republic.

Solidarity and multilateralism in action

Those driving the democratic transition in Sudan risked their lives for the ideals of a democratic society – ideals we Europeans too often take for granted. That is why we owe it to them to do all we can to achieve their democratic aspirations, especially at a time when the corona virus pandemic is creating havoc and putting massive pressure on societies and resources.

It was for this reason that yesterday, alongside the Sudanese Government, Germany and the UN, we co-hosted the Sudan Partnership Conference. Our collective goal was to mobilise political and financial support from the international community to enable the Sudanese authorities to bring the revolution of 2018/2019 forward and make sure no step backward happens.

The outcome fully matched our ambitions: no fewer than 50 countries and international organisations committed to back the country’s reform agenda. And all together, we have raised €1.6 billion euros, out of which €770  million were provided by the European Union and its Member States (Team Europe).

This is not a minor success: we have sent out a strong signal and put our money where our mouth is, encouraging Sudan on its path to democracy, rule of law and development.

The Sudan Partnership Conference was a milestone. But establishing democracy is a journey, not an event. The people of Sudan should know they can count on our support all along the way.