HR/VP Blog - EU enlargement is back high on the agenda and rightly so. Last week, the European Council decided that the future of Ukraine, Moldova and Georgia lies in the EU. The countries of the Western Balkans are already on that path and the EU has also reiterated its commitment towards them. As we revitalise EU enlargement, we must make a similar effort to reform the EU and our decision-making. Because an enlarged EU must also be able to act. This also means reducing the scope of the unanimity rule in foreign policy and other areas, to take more decisions by qualified majority vote. 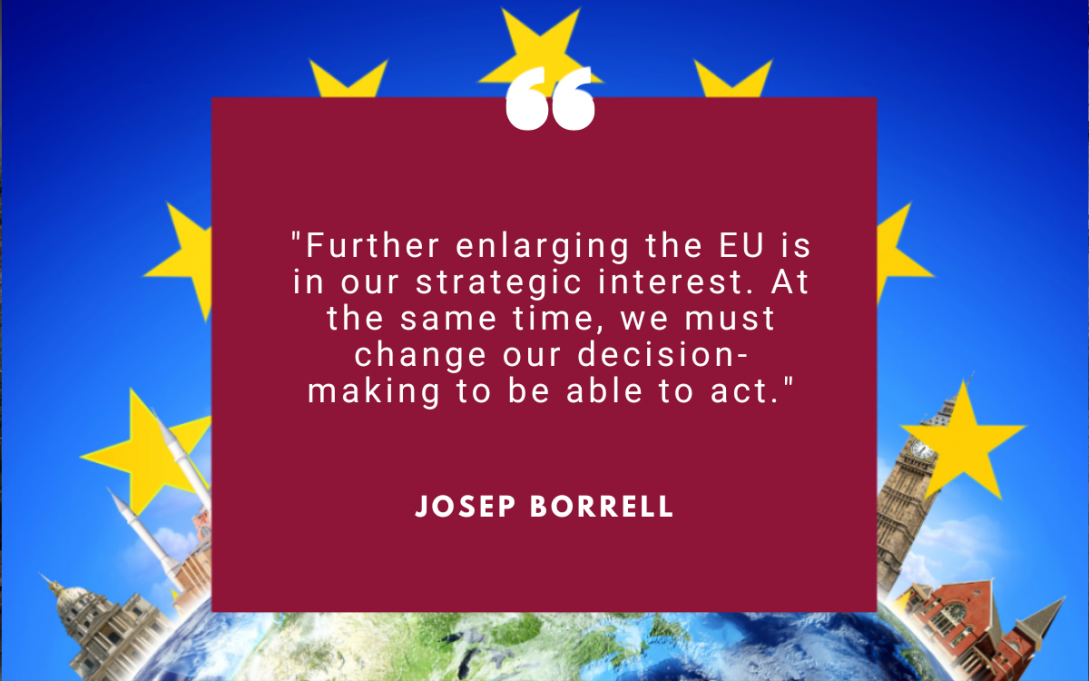 Enlargement remains one of the EU’s most successful foreign policy tools. It has its critics, for going either too slow or too fast, for being too technical or hostage to political horse trading. But the facts shows that enlargement has been the principal way of organising the European continent, with the EU steadily growing from 6 member states in the 1950s to 12, 15 and 27 member states today. It is hard to think of an EU policy that has been more transformational. Historically, institutional reforms and new areas of integration have accompanied each wave of accession: so we have been most successful when we have pursued widening and deepening together.

Russia’s war against Ukraine has accelerated history from many perspectives. It has also sharpened the debate on Europe’s order and the principles that underpin it. For many countries, beginning with Ukraine, this is a strategic moment to state their aspirations to join the EU and all it represents – and to get recognition for their ambitions. Ukrainian leaders have been quite explicit that, together with the military support to defend itself against the Russian aggression, getting EU candidate status has been their top priority. You see a similar reasoning from the government of Moldova. And finally, you see it in the government of Georgia’s request and the tens of thousands of Georgian demonstrators who took to the streets of Tbilisi this week with EU flags.

At the same time, the countries of the Western Balkans have, quite rightly, demanded that their accession process is judged on their own merits. It has been almost 20 years ago that the EU declared in Thessaloniki that ‘the future of the Western Balkans is within the EU’, so a certain degree of impatience on their side, to say the least, is understandable.

Enlarging the EU with those countries willing and able to meet the conditions is not a ‘favour’ or a concession. It is in our strategic interest

On the EU side, we should be clear that enlarging the EU with those countries willing and able to meet the conditions is not a ‘favour’ or a concession. It is in our strategic interest. It is a way of structuring the continent around EU values and standards. A credible enlargement policy is a geostrategic investment in peace, stability, security and economic growth in the whole of Europe. Others are openly contesting EU influence and values in the neighbourhood, so we have to be active and enlarge to those who meet the criteria.

Maintaining our capacity to act

As we revive EU enlargement, we must at the same time maintain the EU’s capacity to act. This too is a geo-political imperative. It is clear that at various times we have paid a price for the unanimity principle in EU foreign policy, by weakening and delaying our actions.

During the first weeks after Russia’s invasion of Ukraine, we were acting at speed and scale, breaking several taboos along the way. Some were surprised and many welcomed that the EU was acting with a real strategic sense of purpose. But soon after the situation became more mixed.

At the end of May we reached an agreement on the 6th package of sanctions against Russia (targeting oil, insurance and adding more listings). But it took us a month to get the package over the line. And I have to regret that some final provisions were watered down and in the final hours, the Patriarch Kirill was left off the list of sanctioned individuals, despite the fact that his presence on the list was not contested during discussions in the Council and despite his well-documented record as a staunch supporter of Putin’s war.

We have seen similar dynamics on the opening of accession negotiations with North Macedonia and Albania, with one country blocking what everyone else can agree to – again with negative consequences for the EU’s credibility and influence.

How to handle diversity in a widening EU

After two and a half years of experiences having dealt with such situations, I think that we have to review our decision-making process. Over the years, we have seen many instances where member states were divided on foreign policy issues. And in principle it is normal that we have different views to start with, given our differences in history, geography and strategic political culture. But what matters in political life is not how a discussion starts but how it ends. The strength of the EU system has always been to somehow turn divisions into agreements. And here it matters a great deal whether a decision is taken by unanimity or by qualified majority vote (QMV).

If countries know in advance that the final decision can be taken by a qualified majority vote, they have a strong incentive to negotiate and shape the consensus. If they know that they can block everything they do not have an incentive to invest in a healthy compromise

If countries know in advance that the final decision can be taken by a qualified majority vote, they have a strong incentive to negotiate, to create alliances and to shape the consensus. If they know that they can block everything – and are sometimes even compensated for it – they do not have an incentive to invest in a healthy compromise. They can sit on their positions, obliging others to change. And the more outliers are seen as successful in their tactics, the more these dynamics spread, with vetoes now happening on a more frequently than in the past.

One sometimes hears we must keep unanimity in foreign and security policy because decisions in this area are ultra-sensitive: who can risk being outvoted on a matter of vital national interest? Here one can make two counter points:

First, many policy areas where the EU does take decisions by QMV are no less sensitive or important: think of migration, climate targets or the green taxonomy – to name a recent controversial item. Second, in practice, the Council rarely ever adopts decisions by a vote. The ethos of the club – as the historical record shows - is to keep talking until a consensus is formed. But if the threat of casting a veto is not there, every member state, big or small, has to negotiate. And they do - and that makes all the difference.

This is of course a long-standing debate, as I argued already in October 2020. But the context is new: the war against Ukraine has highlighted the need for the EU to be able to take strategic decisions in real time. Many EU leaders and citizens have called for a move away from unanimity in foreign policy. Indeed, it is a clear demand coming out of the Conference on the Future of Europe.

There are compelling reasons to bring in the Western Balkans countries, give candidate status to Ukraine and Moldova, and hopefully soon to Georgia as well. But equally, it is folly to make what does not work at 27, completely unworkable at 30 or still more

And now that enlargement is firmly back on the agenda, we can no longer duck the issue of how an EU of, say, 35 countries would function. There are compelling reasons to bring in the Western Balkans countries, give candidate status to Ukraine and Moldova, and hopefully soon to Georgia as well. But equally, it is folly to make what does not work at 27, completely unworkable at 30 or still more.  We need to cut the Gordian knot.

The best answer is to remove the dead weight of the unanimity rule. It is already possible to do so by using the so-called constructive abstention which is, for instance. how EULEX Kosovo was launched. But this is no use if the outlier does not accept to abstain constructively. Here we could advance with ‘super QMV’, for example 27 minus 2 or 3, so as not to be blocked by one or two single countries. We can also identify areas of foreign policy where we experiment with QMV, for example statements, sanctions and implementing decisions. This could help build confidence among member states with the idea of loosening the unanimity requirement.

There are many other problems in EU foreign policy and getting rid of unanimity is not a panacea. But having been 2,5 years in the job, I cannot think of a single change that would have a more powerful effect to improve our ability to act in a hostile world. And that is precisely what our citizens demand of us.

In addition to the renewed debate on EU enlargement and decision-making, there is also the idea of building a wider European Political Community, as for instance President Macron has proposed and President Michel has echoed. This wider club could unite all European countries that share democratic principles and want to pursue concrete and flexible forms of cooperation. It is about the future organisation of our continent and how we as EU should position ourselves, following Russia’s war against Ukraine. I participated in the Leaders’ discussion at the Summit on different options for such a Community, in terms of purpose, membership and practical modalities. Everyone agrees that any such club should complement and not replace existing EU policies, notably enlargement. And it should also supplement, not substitute, the work of existing organisations like the OSCE and the Council of Europe.

A European Political Community could enable candidate countries to take part in various EU policies right away. It could also involve certain countries that are not necessarily destined to join the Union, such as Norway or Switzerland or the United Kingdom, if they wish

As I said, the war is acting as an accelerator of history. And by its complexities and requirements, EU enlargement is a demanding process that takes many years. Its speed does not fit easily with the speed of the changes in the geopolitical context. So an additional framework is necessary. A European Political Community could enable candidate countries to take part in various EU policies right away. It could also involve certain countries that are not necessarily destined to join the Union, such as Norway or Switzerland or the United Kingdom, if they wish. The subject is complex and requires careful consideration, but the idea has merits and the debate will certainly continue. We should take careful and gradual steps in developing the structure of the initiative, while respecting the EU’s decision-making autonomy.

Migration is a key element of our foreign policy