The Global Gateway, a brand to boost European action worldwide

HR/VP Blog – A year ago, the European Commission launched the Global Gateway initiative to promote sustainable connectivity around the world with a €300 billion investment target, combining resources from EU institutions, member states and private sector. Last Sunday, I participated in the first Global Gateway board meeting, taking stock of this strategic project. Since its launch, this initiative has raised high expectations. We are now committed to deliver. 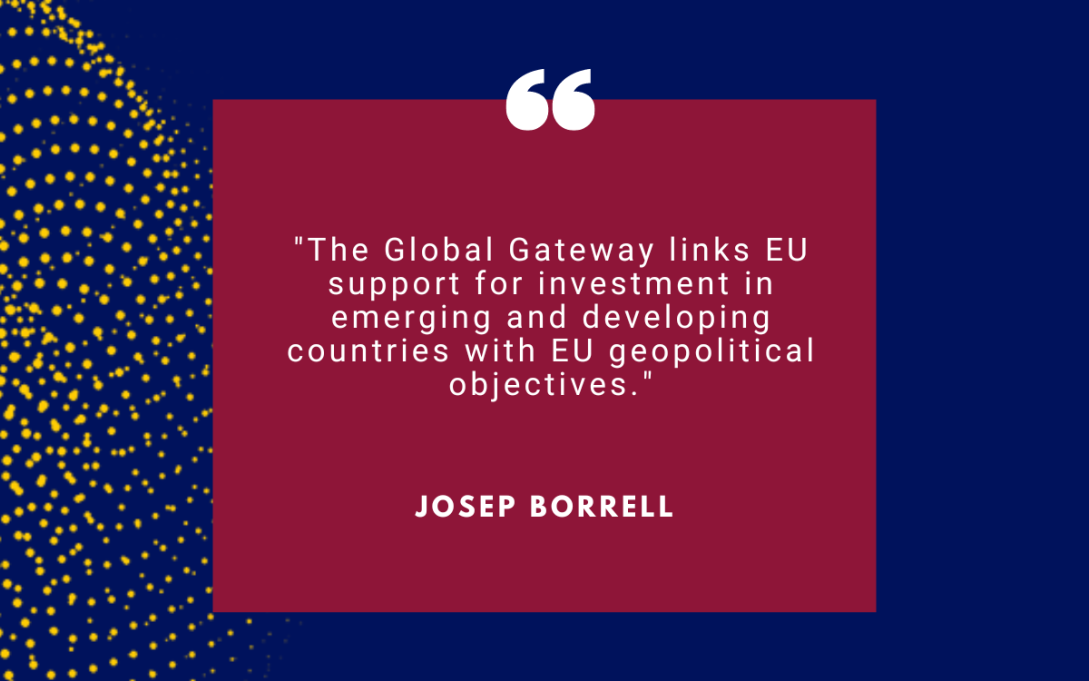 As a major EU foreign policy tool, the Global Gateway offers a framework to link EU support for infrastructure investment in emerging and developing countries with EU geopolitical objectives. We want to promote trusted connectivity and democratic values worldwide and build closer links, not dependencies, with our partners, by supporting them in their digital and green transition.

The Global Gateway offers a framework to link EU support for infrastructure investment in emerging and developing countries with EU geopolitical objectives.

Global Gateway aims also to give greater visibility to the European Union’s actions in a field in which it is already a major player. In an increasingly multipolar world with intense competition, other actors, like China with its Belt and Road Initiative, have developed their own footprint.

The need to align our resources

No investment is possible without money. That is why the Global Gateway can only become a success if all EU actors work closely to align their resources. We are bringing together the European Commission, the European Investment Bank (EIB), the European Bank for Reconstruction and Development (EBRD), our member states and their national financial and development Institutions, as well as the private sector. We need to act as a real Team Europe to be more than the sum of our parts. Without this, we will not reach the scale we need to compete in the geopolitical marketplace.

We need to act as a real Team Europe to be more than the sum of our parts. Without this, we will not reach the scale we need to compete in the geopolitical marketplace.

We need projects that serve our interests but they also have to serve our partners. We need to be very strategic on where we place our money and develop a better understanding of what our partners really need. We need to ask ourselves What we want to put our leverage on; Who we want to work with; and How to go faster and have more visibility. We have worked hard in 2022 to select flagship projects around the world that will move the needle on key challenges from digital to climate change.

Ready to take off

Due to the high number of stakeholders involved, it has taken time and effort to get to the point where we are ready to take off. At our first board meeting last Sunday, chaired by EC President Von der Leyen, with representatives of EU member states, the presidents of the EIB and EBRD, and representatives of the European Parliament, we discussed our main priorities around the globe.

As to Latin America and the Caribbean (LAC), we will adopt a specific Global Gateway Investment Agenda at the EU-LAC Summit in July 2023. For that purpose, we are mobilising private and public partners to give shape to our Digital Alliance to be launched in March. We want to cooperate more closely in this area after having put in place the BELLA undersea cable connecting our two continents. We will also develop our cooperation on energy, including green hydrogen, and raw materials, such as lithium.

For Africa, €150 billion are foreseen for investment projects in the Global Gateway framework. We have already launched an important initiative to produce vaccines on the continent. We will work in priority with countries like Namibia, Rwanda, Kenya, Côte d’Ivoire, Angola, Niger or Senegal,  that have shown interest in strengthening their partnership with us on digital connectivity, hydrogen, critical raw material or transport corridors.

In Central Asia, which I visited last month, the EU is financing 15% of the €5 billion Rogun Hydropower Plant. Our Tajik partners have chosen the high-quality EU offer over the low-cost Chinese one. Member states and international financial institutions are also engaged in this project, which will change the dynamics of power generation in the whole of Central Asia. We are also investing €60 million to develop a high-capacity internet network in the region, establishing a secure connection between Europe and Central Asia.

In the Indo-Pacific Region, we have announced a € 10 billion investment package at the EU-ASEAN Summit this week. Under the Global Gateway umbrella, we are also bringing Ukraine closer to the EU by changing Ukraine’s railway gauge to the European one and welcoming Ukraine into our free roaming area.

For the coming years, Global Gateway will be a key EU foreign policy tool. The EIB and the EBRD will support this work, mobilising their expertise. EU delegations and member state embassies will have to coordinate closely on the ground, where Global Gateway projects will be developed. To reach our geopolitical objective, we will need also to work with other like-minded partners. Global Gateway will be the EU’s contribution to the G7 Partnership for Global Infrastructure and Investment.

We are not only witnessing a global battle of narratives but also a battle of offers. We, as EU, need to do more, differently and better in this battle.

Today, we are not only witnessing a global battle of narratives but also a global battle of offers. We, as EU, need to be ready to do more, differently and better in this battle. Since its launch last year, Global Gateway has raised high expectations. 2023 will be a credibility test for us. We need now to under-promise and over-deliver. Talk less about abstract financial figures and show in practice what we can do on the ground. Let’s get to work!