HR/VP Josep Borrell in Montenegro: the EU supports the European future of Montenegro and its people 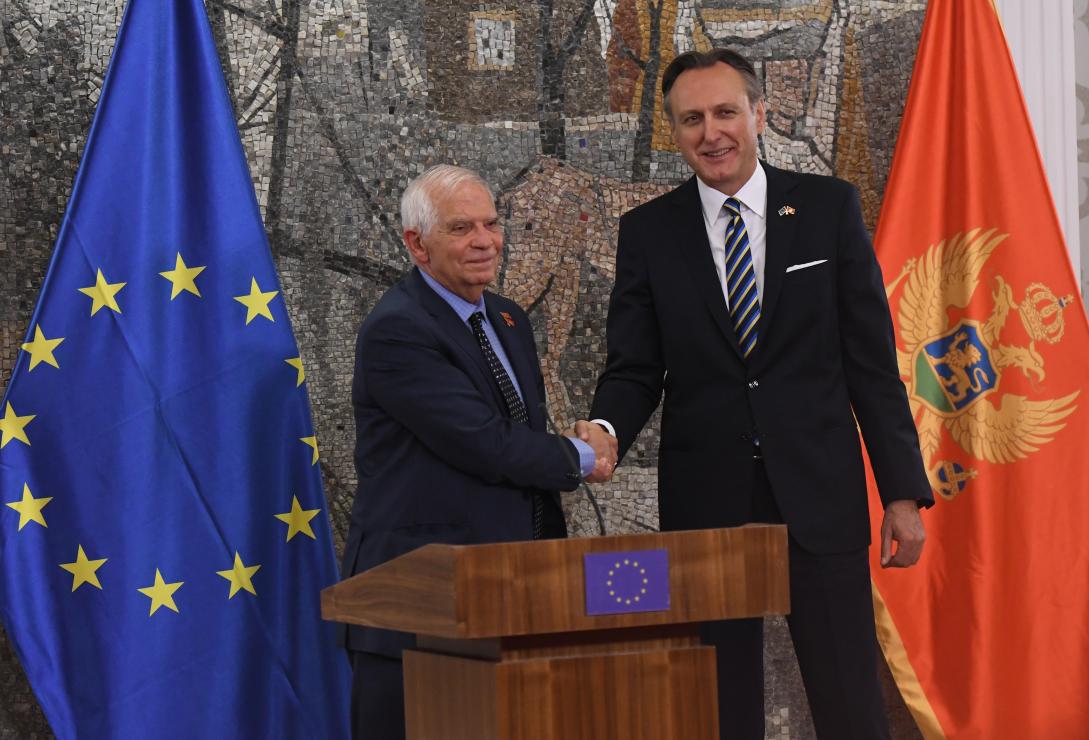 During his trip to Montenegro, HR/VP reviewed the EU relations with the country, the progress achieved in the accession negotiations and discussed the regional and domestic developments. HRVP also reaffirmed EU support to the European future of Montenegro and the Western Balkans, while announcing additional EU support to enhance the resilience of the whole region in the current geopolitical setting.

EU accession is a strategic priority for Montenegro

HRVP welcomed the progress made in the accession process. With 33 out of 35 negotiating chapters opened, Montenegro is the most advanced candidate country. “There is an opportunity for Montenegro to be a front runner in the accession negotiations. You have the potential to be a success story” stressed HR/VP.

The expectations are now of a strong political commitment and consensus building by all relevant institutions and by all political actors in carrying the country’s EU reform agenda. Full commitment should be given to the implementation of all EU-related reforms, in particular in the rule of law area (judiciary, media freedom, anti-corruption fight and organised crime).

I am confident that political leaders in Montenegro will make EU accession a strategic priority, said HR/VP.

On 14 July HR/VP Borrell chaired the EU-Montenegro Stabilisation and Association Council (SA Council), attended by Commissioner for Neighbourhood and Enlargement Várhelyi and Montenegrin Prime Minister Abazović. This was the first time that the SA Council meeting took place in the Western Balkans region, underlining the European Union’s unequivocal commitment to the EU integration of the whole region and to the accession process of Montenegro. HRVP Borell added that:

The current dramatic geopolitical situation makes the Western Balkan’s integration an ever greater strategic priority and a geopolitical imperative.

HRVP also met, among others, with Prime Minister Abazović and President Djukanović. HR/VP had an exchange with the Montenegrin civil society. In Budva, HRVP met with the Ukrainian refugees and listen to their stories and needs.

HRVP expressed strong appreciation for Montenegro’s unprecedented, more than decade-long, full alignment with EU common foreign and security policy.  This includes a concrete commitment on the restrictive measures that the EU introduced following Russia’s unprovoked and unjustified aggression against Ukraine.

This is one of the strongest signals of your commitment to EU integration – proving the intentions with real actions, said HRVP.

To face possible repercussions, HRVP announced additional EU support to enhance the resilience of Montenegro and the Western Balkans:

The Rapid Reaction Action, underpinned with EUR 4.9 million for urgent support, for the Western Balkans partners to strengthen their resilience in dealing with cyber threats and foreign information manipulation.

The EU will increase its continued support to Montenegro and the region on the other consequences of the Russian aggression on Ukraine, including on food and energy security, as well strengthening the military and defence capacities (e.g. the Balkan Medical Task Force).

The launch of the European Diplomatic Academy

HRVP also announced the launch of the European Diplomatic Academy, which will bring together Junior Diplomats from EU Member States, EU institutions and from the Western Balkans and Ukraine. They will over a period of 9 months be equipped with the knowledge and skills necessary to shape EU policies and decisions and to implement them across the institutions.

Access to justice and mental health go hand-in-hand. The EU-UN Spotlight Initiative in Timor-Leste training the National Police, PNTL—VPU, on sensitive approaches to survivors regarding mental health and trauma

Tenth Review Conference of the NPT - strengthening the Treaty, promoting its universalisation and enhancing its implementation