The huge post pandemic challenges Peru has to face

HR/VP Blog – I have just returned from my first trip to Latin America since the beginning of my mandate. I first visited Peru, the country with the highest COVID-19 death rate in the world. The country is also struggling with a highly polarised political landscape. Peru illustrates the colossal challenges that Latin America is facing after the COVID-19 crisis, as well as the high expectations the region has towards the EU. 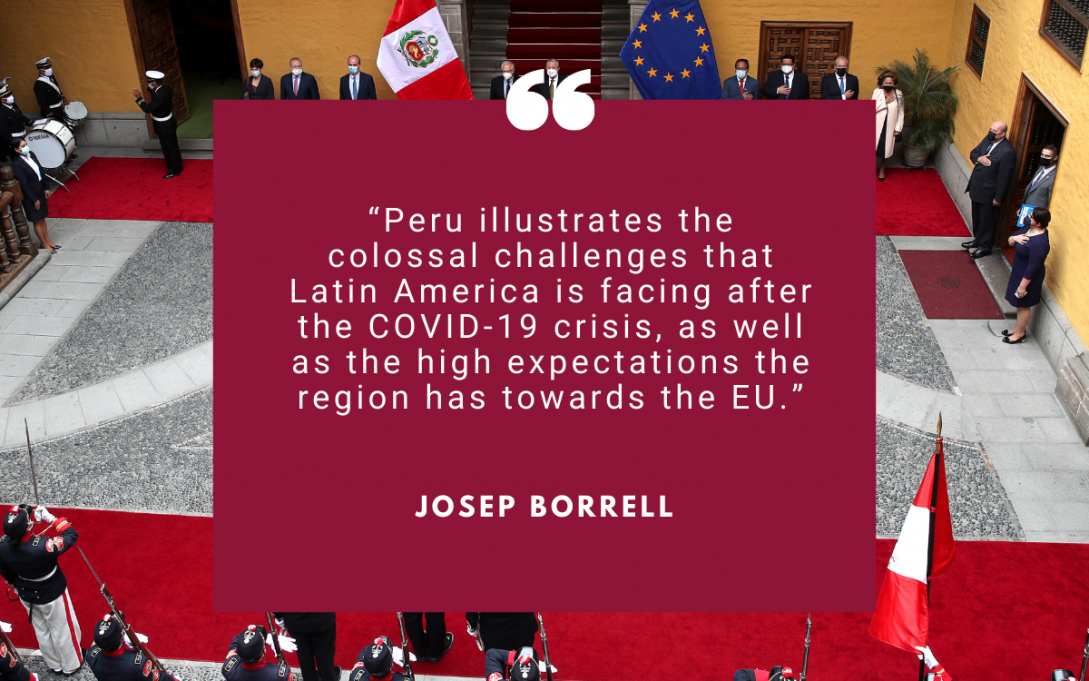 I started this visit in Peru and will come back later in this blog on my stay in Brazil, which was the second part of this mission. I have often stressed that Latin America has not been present enough on the EU’s radar screen. No summit with Latin America has been held since 2015 and no high-level EU visit has taken place for the last nine years. And yet, European firms have invested more in Latin America than in China, Russia, Japan and India put together and millions of our citizens live there, just as many South Americans live in Europe. Latin America is one of the regions in the world that is closest to us in terms of culture and history.

Other powers invest a lot actually in Latin America

While we may not pay enough attention to Latin America, this is not the case for other powers. China in particular is now the first trade partner of many countries in the region and it has invested heavily in recent years, not only economically but also politically. The European Union must become more active and develop closer economic and political links with Latin America. I hope this trip will begin to reverse the trend, before the EU-Latin America Leaders’ Meeting that we will be holding in early December.

Peru, the most affected country in the world

Peru has been the country most affected in the world by the COVID-19 pandemic in terms of number of deaths as a percentage of the population. This is due in particular to the poor state of the Peruvian health system, with a lack of oxygen capacities and intensive care beds. The country has been indeed marked by many crises and dysfunctions within its public sphere for many years now. During the next Multiannual Financial Framework (2021-2027), Peru will be the country for which we will increase EU support the most, particularly in the health sector.

Peruvian schools are only starting to reopen now after two years of closure; it risks to have serious consequences for the future. On the economic front, the prolonged lockdowns have had devastating effects in a country that lacks a developed social welfare system. Most economic activities are carried out in the informal sector, by people whose livelihoods depend on their ability to go out to work every day. This crisis has not only aggravated inequalities that were already very high before; it has also resulted in a spectacular increase in sexual violence against women and girls, as the human rights NGOs we met reported to us.

“This crisis has aggravated inequalities that were already very high before; it has also resulted in a spectacular increase in sexual violence against women and girls.”

Our visit came also at a delicate political moment for Peru. President Pedro Castillo, candidate of the leftist party Peru Libre, has just been elected in late July. As a teacher in the outlying region of Cajamarca, he was not part of the traditional Peruvian political class and was virtually unknown at the national level until only a few months ago. President Castillo embodies the desire to rebalance a country that is very unequal, both socially and territorially between the giant metropolitan area of Lima and the poor rural areas feeling neglected. The election result was very tight, leading to part of the opposition to challenge his legitimacy as President. These elections were however monitored by an EU Electoral Observation Mission (EOM), which concluded that the elections were free and fair and Pedro Castillo's election legitimate. When we met, I had the occasion to comment on the EOM report with María del Carmen Alva, President of the Congress and member of the opposition.

“President Castillo embodies the desire to rebalance a country that is very unequal, both socially and territorially between the giant metropolitan area of Lima and the poor rural areas.”

Although Pedro Castillo took office on 28 July, when we were in Peru he was facing a serious social and political crisis. Deep social conflicts are linked to the negative environmental impact of mining, which plays a fundamental role in the Peruvian economy. Pedro Castillo has had also to change Prime Minister after only two months in office and the new one, Mirtha Vásquez, had to pass the vote of confidence of the Peruvian Congress on 4 November, the day after our visit. While we were in Lima, the Interior Minister also had to resign.

“I was impressed by President Castillo’s determination to fight inequalities and improve the living conditions of the poor, based on his profound knowledge of the situation, due to his long-time experience on the ground.”

When I met President Castillo, I was impressed by his determination to fight inequalities and improve the living conditions of the poor. This determination is not principally based on an ideological approach, but rather on his profound knowledge of the situation, due to his long-time experience on the ground. He understands well the risk that the political polarisation is posing for the stability of the country. His decision to take on board experienced and qualified people like Ministers Maúrtua and Francke is rather reassuring in this regard.

With Pedro Franke, Peru’s Economy and Finance Minister, we discussed the deep structural difficulties Peru is facing, particularly in terms of public finances: with around 15% of GDP, Peru has the lowest ratio of public ressources in Latin America. To reduce social and territorial inequalities and provide public services, Pedro Castillo's government will have to increase this share significantly. From a political point of view, it is always a difficult undertaking. In a country as polarised and divided as Peru, it will certainly be a serious challenge. I shared with Minister Francke my experience as the Treasury Secretary of State in Spain in the 1980s, establishing at that time a modern taxation system able to reduce tax avoidance drastically. I also advised him to continue supporting an open economy able to attract foreign direct investment.

“To reduce social and territorial inequalities and provide public services, Pedro Castillo's government will have to increase tax revenues significantly. It is always a difficult undertaking. In a country as polarised and divided as Peru, it will certainly be a serious challenge.”

Since 2013, we have a trade agreement with Peru. All our interlocutors, including the Minister of Trade and the governors of the provinces, stressed the importance of this agreement and how it has helped to increase the output and exports of many small and medium-sized enterprises, particularly the producers of quinoa, coffee and cocoa. This agreement also includes a human rights clause. The representatives of Peruvian NGOs, whom I met, confirmed the importance of this clause and the levers it gives them to act on the ground and improve the respect for fundamental rights in a country where this issue often remains problematic. Peru is therefore a good example of how this type of agreement can be mutually beneficial, not only on a strictly economic level but also in terms of respect for people’s fundamental rights.

“Peru is a good example of how trade agreement can be mutually beneficial, not only on a strictly economic level but also in terms of respect for people's fundamental rights.”

We also discussed the issue of drugs production and trafficking, which is of major concern in Peru. The EU and Peru have established cooperation mechanisms in this regards and we discussed ways to develop them further. I was also impressed to learn that Peru, a country of 33 million inhabitants, has welcomed 1,3 million refugees from Venezuela despite its own social and economic difficulties.

“The moment that struck me most was the visit we paid to the Chorrillos District, a suburbs of Lima, meeting a group of women who have developed a craft activity, thanks to the support of the European Union.”

Beyond the official meetings, the moment that struck me most during my Peruvian stay was the visit we paid in the suburbs of Lima, in the Chorrillos District, to a group of women who have developed a craft activity, thanks to the support of the European Union. I could see first-hand the extent of the housing and urban planning problems in the huge urban area of Lima, which has more than 10 million inhabitants and is home to a third of the country's population. In many neighbourhoods, housing remains precarious and basic services are non-existent or very limited.

The wounds left in Peru by Sendero Luminoso

I was also able to measure the depth of the wounds left by the violence that Peru has experienced over the last few decades. The women who run this project are Amerindian from the Ayacucho region on the Altiplano. They fled to Lima to avoid being caught between the terrorists of the guerrilla organisation Sendero Luminoso, of which the region was a stronghold, and the Peruvian army, which was guilty of numerous abuses during its fight against the guerrilla. Although Sendero Luminoso has been defeated for about twenty years, this painful history has left deep wounds, which contribute to explain the prevailing polarisation of the country.

To make a living, while maintaining their ancestral culture, these women produce and sell high quality traditional wood paintings known as Sarhua tables. COVID-19 and the lockdowns have greatly affected their activity, but thanks to their tenacity and solidarity, they held on. I am proud that the EU has contributed to enable these women to carry out this activity of great economic and cultural value.

My first visit to Peru as High Representative illustrates both the colossal challenges that Latin America is facing after the COVID-19 crisis, to fight social and territorial inequalities and to attain political stability. It also illustrates how important it is, that we respond to the high expectations that the region has on the European Union.