The leaders of Bosnia-Herzegovina must deliver on reforms

HR/VP Blog – Ahead of the Foreign Affairs Council on 10 May, I have sent a clear message to the leaders of Bosnia and Herzegovina (BiH) during an important discussion with the Presidency of the country: they must stop using divisive nationalist rhetoric and instead focus on rapid progress on reforms. 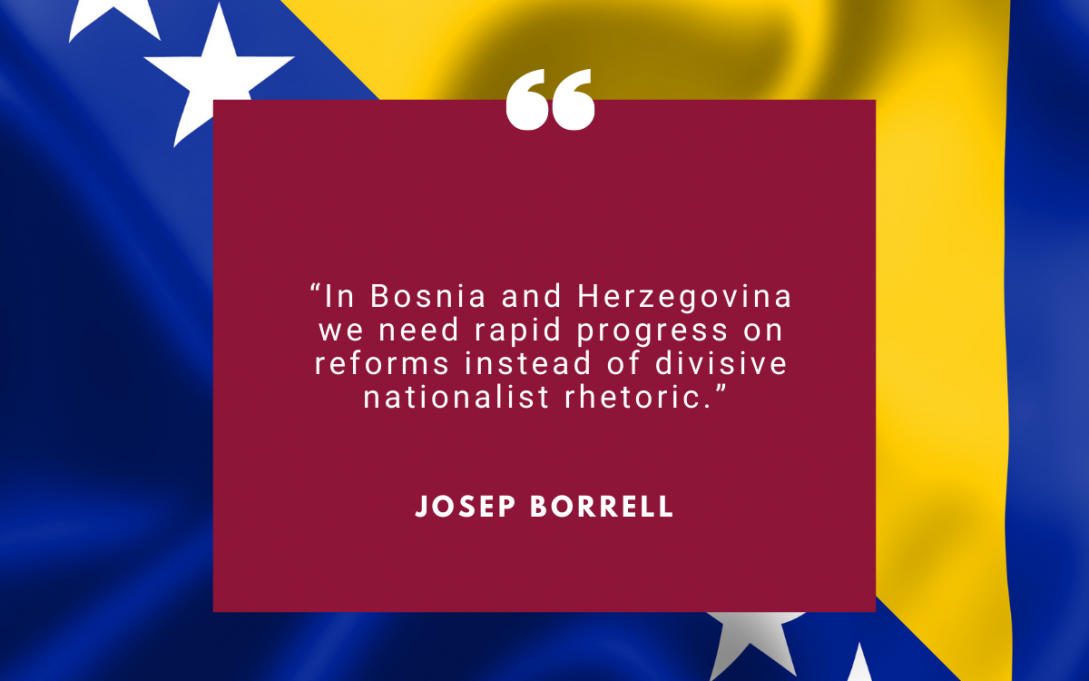 Tomorrow at the EU Foreign Affairs Council, we will discuss the situation in the Western Balkans. This region, in our immediate neighbourhood, has a high priority on the EU agenda: we want to accompany these countries towards a future EU membership. However, the Western Balkans are currently facing several serious difficulties, such as tackling the COVID-19 pandemic, the relations between Belgrade and Pristina, the lack of progress in the accession negotiations of Albania and North Macedonia and the current problems in Montenegro. We will discuss all these issues tomorrow. However, I would like to emphasise in this blogpost the particularly difficult situation in Bosnia and Herzegovina.

The political atmosphere in Bosnia and Herzegovina has deteriorated recently.

Ten days ago, I had a video conference with the three Members of the Bosnia and Herzegovina Presidency, Milorad Dodik, Šefik Džaferović, and Željko Komšić. Building on my strong engagement over the last months, I asked for this meeting because the political atmosphere in Bosnia and Herzegovina has significantly deteriorated recently.

We have witnessed a disturbing migrant crisis at the end of last year with very dysfunctional responses from the BiH authorities. In recent weeks, a negative spin around the ongoing talks on the necessary electoral and constitutional reforms culminated in various ‘non-papers’, some of which criticised the EU/US for their facilitating role in these efforts.

“A call for redrawing borders in the region and partition of Bosnia and Herzegovina along ethnic lines, has triggered a push for inflammatory reactions.”

One of them also called for redrawing borders in the region and partition of Bosnia and Herzegovina along ethnic lines, which has aggravated the atmosphere and triggered a push for a secessionist agenda and the inflammatory reactions.

A difficult meeting with the BiH presidency

I therefore decided to call the members of the Presidency together. It was a difficult meeting, with many attacks and recriminations between the three members of the BiH Presidency. For my part, I sent them a strong and clear message.

First, the Western Balkans, including Bosnia and Herzegovina, are the priority on the EU agenda. This is why I have scheduled a discussion on the region at the next Foreign Affairs Council on 10 May. Our commitment to the region and its EU perspective is reflected in the unprecedented levels of EU financial support – including to mitigate the impact of COVID-19.

“The EU funded 213,822 doses of BioNTech/Pfizer vaccines for Bosnia and Herzegovina come with no strings attached – we do not sell them, we donate them.”

Last week, alongside other Western Balkan countries, Bosnia and Herzegovina received the first batch of the EU-funded vaccines from the specific arrangement we have made for the region: 213,822 doses of BioNTech/Pfizer out of a total of 651,000 for the entire region will be delivered until the end of August. The EU vaccines come with no strings attached – we do not sell them, we donate them.

When we commemorated the 25th anniversary of the Dayton Peace Agreement in Sarajevo last November, the BiH Presidency committed to step up efforts to ensure that all citizens can live in dignity, with mutual acknowledgment, respect and understanding. Rhetoric calling into question the integrity of Bosnia and Herzegovina goes in the opposite direction and it has to stop. Talking about secession, new borders, further ethnic divisions or war, is dangerous and unacceptable.

“Rhetoric calling into question the integrity of Bosnia and Herzegovina has to stop. Talking about secession, new borders, further ethnic divisions or war, is dangerous and unacceptable.”

The EU’s position has not changed and will not change: we support the territorial integrity and sovereignty of Bosnia and Herzegovina and its future lies within the EU as a united and sovereign country. I have strongly encouraged my counterparts to put an end to any counterproductive discourse and actions.

Move from Dayton to Brussels

When I was in Sarajevo last November, I had an in-depth exchange with the BiH Presidency members. We expected then the authorities of Bosnia and Herzegovina to use this non-election year to move decisively from Dayton to Brussels, with substantial progress on implementing the 14 key priorities identified by the European Commission’s Opinion back in May 2019. It’s already May 2021 and regrettably there has been very little progress thus far.

“Bosnia an Herzegovina citizens and EU member states want to see more progress and they want to see it now.”

BiH citizens and EU member states want to see more progress and they want to see it now. The country’s leaders should seize the opportunity of the upcoming FAC discussion in May and the upcoming EU-BiH Stabilisation and Association Council to deliver positive news. They should come to the table with concrete results, not just promises, especially when we have heard these promises before. No more hollow words. Only action and progress can move Bosnia and Herzegovina forward on its EU accession track and lead to candidate status. The lack of progress and continuing retrograde rhetoric and actions would have the opposite effect.

The constitutional and electoral reform: a key deliverable

A key deliverable is the constitutional and electoral reform. This may sound ambitious, but there is no way around amending the BiH Constitution to meet EU standards and implement the pending European Court of Human Rights Sejdic/Finci case. Bosnia and Herzegovina needs also an amended electoral framework in line with OSCE and GRECO recommendations. I know these reforms are difficult and touch upon very sensitive issues: we need constructive engagement of all leaders across the political spectrum and civil society in order to succeed.

“I know these constitutional and electoral reforms touch upon very sensitive issues: we need constructive engagement of all leaders across the political spectrum and civil society in order to succeed.”

Strengthening the rule of law also remains essential. It is perfectly possible to finalize the adoption of the law on public procurement, the law on conflict of interest and the amendments to the High Judicial and Prosecutorial Law in the coming months in line with EU requirements. Anything else would only signal obstruction of the reforms needed on the European path.

Finally, the role of the EU, together with the US, is to facilitate the talks and ensure that the proposals on the table are aligned with EU standards. Attempts to misrepresent the role and intent of the EU and our international partners in Bosnia and Herzegovina are unacceptable. The Special Representative, who is also the EU’s representative in BiH Ambassador Johann Sattler and his staff have my full confidence and support.

“The role of the EU, together with the US, is to facilitate the talks. Attempts to misrepresent the role and intent of the EU and our international partners in Bosnia and Herzegovina are unacceptable.”

During the last months, I invested time and energy to support Bosnia and Herzegovina on the path of reforms and EU accession. The BiH authorities need now to show EU member states that they can deliver on this important agenda.