HRVP Blog - Since the beginning of my mandate, I have been working on a new EU Global Human Rights Sanctions Regime. We are now at the final stage of a long and complex process to establish it. Once the legal instruments adopted by the Council, this regime would allow us to go swiftly after perpetrators, wherever violations occur. Let me explain what this new regime is about and how the EU institutional machinery works. 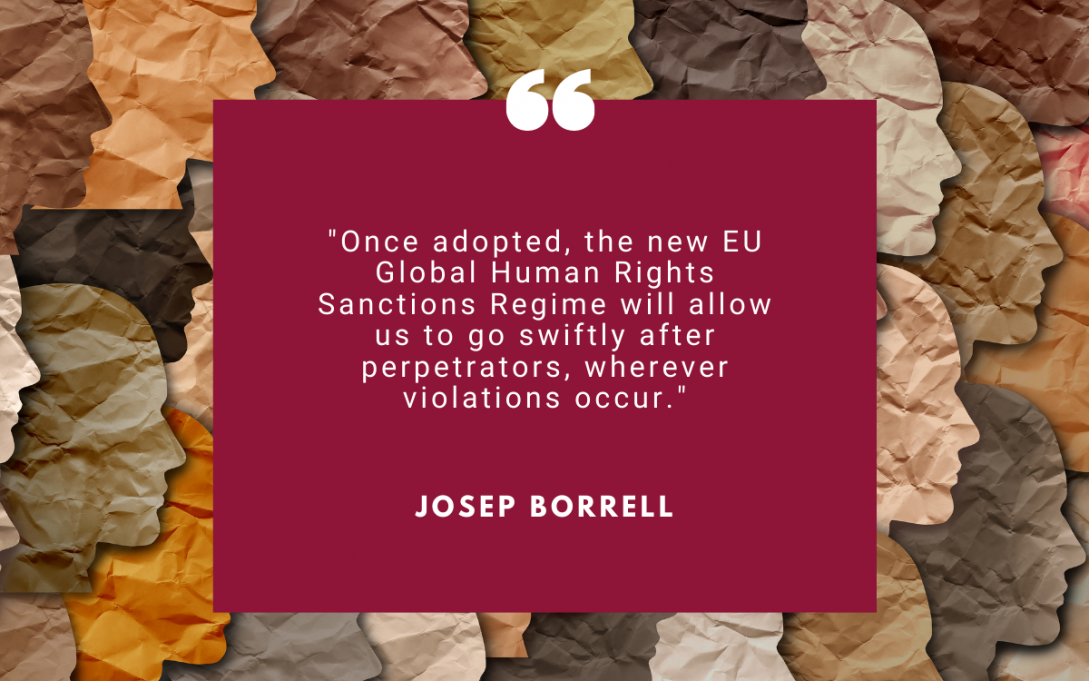 On my fourth day in office in December 2019, I attended the joint meeting of the Committee on Foreign Affairs (AFET) of the European Parliament and of the national parliaments to discuss policy priorities I hoped to pursue during my mandate. The venue was the same room where I passed my hearing as HR/VP designate.

MEP’s and MP’s made numerous suggestions for where and how the EU could strengthen its foreign policy. I remember above all the question from Mr Rihards Kols, MP from Latvia. He asked me whether I was in favour of a ‘European Magnitsky Act’. I said that in general, I was all in favour of strong EU action on human rights but I also had to confess that I was not fully aware what exactly his question meant.

For those who don't know this act, the so called Magnitsky Act, formally known as the Russia and Moldova Jackson-Vanik Repeal and Sergei Magnitsky Rule of Law Accountability Act, is a bipartisan bill passed by the U.S. Congress and signed into law by President Barack Obama in December 2012. It intends to punish Russian officials responsible for the death of the Russian tax lawyer Sergei Magnitsky in a Moscow prison in 2009.

“I was convinced by the idea of a global sanctions regime to tackle human rights abuses, instead of having to go case by case as we do now.”

As soon as I studied the file properly, I was convinced by the idea of a global sanctions regime to tackle human rights abuses, instead of having to go case by case as we do now. Just a few days later, at my very first Foreign Affairs Council (FAC), we found political agreement among all member states to begin the work on such a regime, an initiative first floated by the Netherlands. I concluded the press conference saying that ‘there was a strong consensus to launch the preparatory work’ adding that ‘this will be a tangible step re-affirming the EU’s global lead on human rights.’

A long discussion about the scope of the new regime

In the months that followed, Member States discussed intensively the parameters and scope of the new sanctions regime: what actions would be covered and what sanctions could be applied. As soon as they reached an overall political agreement, the European External Action Service (EEAS) and the Commission services prepared the relevant legal documents for Council approval to bring this new regime to life. In fact, legally, the final decision about sanctions belongs to the Council, but it was very important to have the political support of the Commission on that issue. It was in particular helpful that President Von der Leyen made an explicit reference to the new sanctions regime during her first State of the Union speech.

“The support of the Commission on the new sanctions regime was very important and in particular the reference made by President Von der Leyen during her State of the Union speech.”

The approval process has not been easy nor fast. Although a political priority, it was important not to rush discussions to ensure that everyone involved has a common understanding and a united sense of purpose and build the necessary consensus. The EU is based on agreed procedures and institutional rules, which we have to follow, even if this takes time. In that particular case, the Commission and the Council have also to agree on their respective competences regarding the implementation of that sanction regime in accordance with the Treaties.

After The Commission approval of the joint proposal for a Council Regulation, this package has been sent to the Council on 19 October, for discussion and adoption by Member States. And keep in mind that unanimity is required and therefore changes could still be made.

As you see, the adoption procedures are complex, but once adopted, what will the regime do and how is that different and better than what we have now?

We were inspired by a growing global movement among like-minded countries to put in place regimes similar to the US‘ Global Magnitsky Act. However, although the general purpose is very similar, the scope is different. The European regime focusses only on serious human right violations, while the American one covers also the fight against corruption.

“Too many human rights perpetrators believe they can get away with their crimes. So changing their calculus is the main goal of the new sanctions regime.”

Too many human rights perpetrators believe they can get away with their crimes. So changing the calculus of those that commit these crimes is the main goal of the new sanctions regime.

Right now, the EU does use sanctions as part of its wider range of instruments to promote respect for human rights besides trade, dialogue, financial support etc. We decide financial sanctions and travel bans plus sometimes other sectoral restrictions, for example on the sale of weapons or other equipment used for internal repression. But when we do so, it is only in a country-specific basis. Well-known cases are Syria, Libya, Venezuela, Belarus and Myanmar.

“We need a global regime to gain more flexibility and dispenses us from having to set up a specific legal framework each time for each specific case.”

We need a global regime to gain more flexibility to go after the perpetrators regardless of where they are and dispenses us from having to set up a specific legal framework each time for each specific case. With the new sanctions regime, we will be able to proceed quicker and to be more efficient.

Next step: adoption by the Council

As said, the next step in the process belongs to Member States who have to adopt the package in the Council by unanimity. I hope that this will be possible by the time of the Foreign Affairs Council in December. This would be one year since Foreign Ministers first decided to work on the creation of such a regime. And it would be a fitting way to mark the 10 of December, Human Rights Day, the day in 1948, when the UN General Assembly adopted the Universal Declaration of Human Rights.