A new start for the Mediterranean

HR/VP Blog – The last European Council discussed the renewed partnership with our Southern Mediterranean neighbours that I proposed together with the European Commission as High Representative of the European Union. The economic, social, ecological and security challenges facing the region have been exacerbated by the COVID-19 pandemic. Tackling these together is a key challenge for our external policy. 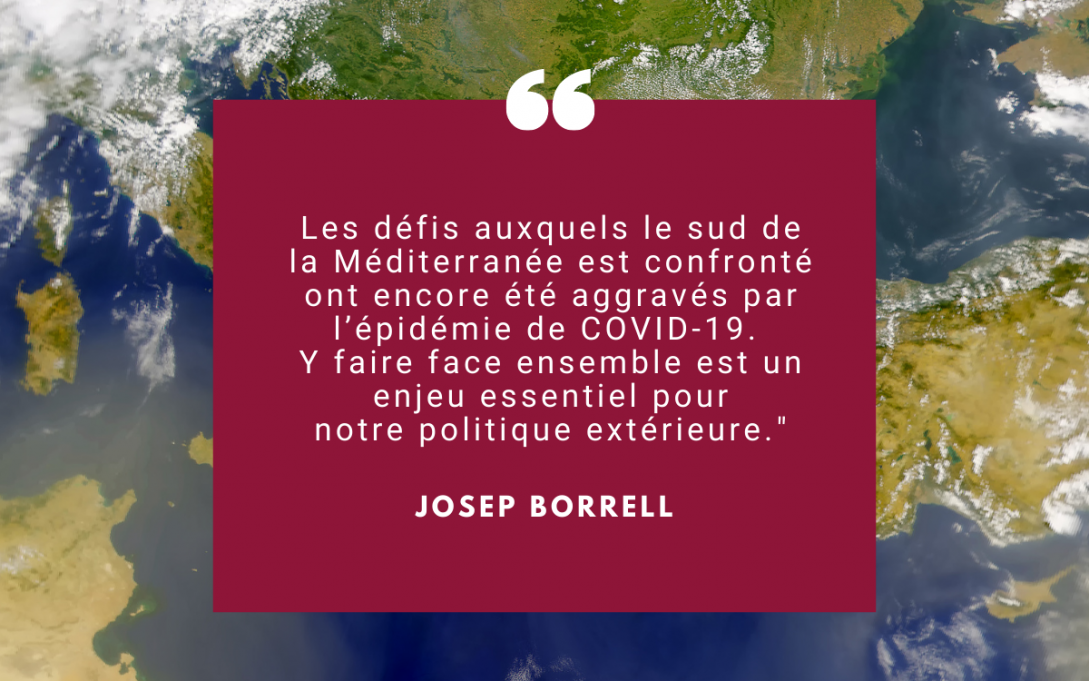 ‘The challenges facing the Southern Mediterranean have been exacerbated by the COVID-19 pandemic. Tackling these together is a key challenge for our external policy.’

In presenting to the European Council the Communication on Partnership with the Southern Neighbourhood, I recalled the Barcelona Declaration. In 1995, in Barcelona the European Union and its partners in the region declared their joint commitment to make the Mediterranean basin an area of dialogue and cooperation, guaranteeing peace, stability and prosperity. I was present as a minister of the Spanish Government, and I remember the hope that this declaration generated at the time.

The unrealised hopes of the Arab Spring

Later, ten years ago now, the Arab Spring gave rise to even greater hopes. It seemed that these might, in a sense, represent something like the year 1989 for the Southern Mediterranean. At that time, one believed that there could be a new impetus towards freedom and democracy in the region. But we all know the rest: the terrible war that ravaged Syria and still continues, the collapse of Libya and its serious repercussions in the Sahel, the spread of terrorism, the refugee crisis, etc.

‘The young are leaving their countries because of war and the lack of freedom, jobs and prospects for the future.’

Optimism has been replaced by desperation. Young people in particular are leaving their countries because of war and the lack of freedom, jobs and prospects for the future. In many respects the situation in the southern Mediterranean may seem worse today than it was in 1995 or 2011.

The situation of our neighbours is difficult above all from an economic point of view. We Europeans are on average eight times more wealthy than our southern neighbours, and the gap is widening between the two shores of the Mediterranean. The Southern Mediterranean is one of the least economically integrated areas in the world: intra-regional trade accounts for less than 6 % of these countries’ international trade. Our Southern Mediterranean neighbours also face massive challenges connected with climate change. The region is warming faster than the rest of the world, desertification is advancing, and competition for already scarce water resources is worsening.

The difficulties faced by our southern neighbours are, however, also to a great extent connected with their demographic dynamics: the population of the region accounts for just half that of the EU, but it is growing much faster. The population of the five Maghreb countries increased by 57% between 1990 and 2019, compared with only 6% in the case of the EU. A quarter of the population of our southern neighbours is under the age of 25, compared to 15% in Europe. Their economies are not creating sufficient numbers of jobs for these many young people, who are increasingly well educated. This has led to growing frustration, which is driving emigration.

‘The economies of our southern neighbours are not creating sufficient numbers of jobs for their many young people, who are increasingly well educated. This has led to growing frustration, which is driving emigration.’

There are undoubtedly serious governance issues in several countries in the region. We must, however, also ask ourselves why we have not managed to better help our neighbours make a transition similar to that which took place in Eastern Europe after the fall of communism in 1989.

It is in this already adverse context that the COVID-19 pandemic has hit the region hard. Tourism, a key source of employment and income, is almost at a standstill. The International Labour Organisation (ILO) estimates that these countries lost around 17 million jobs in the second quarter of 2020 and unemployment more than doubled due to the pandemic.

In any event, the many challenges that the region continues to face call, more than ever, for a common response, since our destinies are inextricably linked. This has long been obvious to the countries of the Union that border the Mediterranean, such as the one I know best, but I believe that the events of recent years have amply demonstrated this to all Europeans.

‘The many challenges that the Southern Mediterranean continue to face call, more than ever, for a common response, since our destinies are inextricably linked.’

So we need now to  determine what we aim to do to t redress these missed opportunities. The Joint Communication that I presented in early February with my colleague, Commissioner Várhelyi, who is responsible for neighbourhood and enlargement, provides some answers.

First of all, we need to work more closely together to solve our common problems: COVID-19, conflict, migration, climate change, terrorism, etc. On all these issues, progress can only be achieved by strengthening regional integration through increased cross-border cooperation.

In particular, we will propose to our partners initiatives to promote carbon neutrality and renewable energy. The region possesses considerable potential, which is still largely under-exploited, particularly in the area of wind and solar energy. We will also seek to encourage the regional integration of electricity networks. And we will help our partners increase their resilience to climate change by reinforcing our action on adaptation, particularly in the most vulnerable sectors such as agriculture and water supply.

Drawing upon all the instruments available to the EU, we are proposing an investment plan to address the region’s structural imbalances through engagement with, in particular, the European Investment Bank (EIB) and the European Bank for Reconstruction and Development (EBRD). Over the period 2021-2027, the Commission proposes to mobilise EUR 7 billion from the EU budget to support the economies of the Southern Mediterranean. This support should help mobilise EUR 30 billion of private and public investments in the region. The communication proposes launching 12 flagship initiatives, focusing in particular on green investment projects.

We must, however, do more. The development of economic relations between the EU and our southern neighbours must play a key role in supporting the recovery of economic activity on the other side of the Mediterranean. Our partners criticise the fact that their trade imbalances with the EU have increased in recent years, and we must make an effort in this area. In this context, our desire to increase the Union’s strategic autonomy by reducing our dependence on distant countries represents an opportunity to develop our economic ties with our southern Mediterranean neighbours.

‘Our desire to increase the Union’s strategic autonomy by reducing our dependence on distant countries represents an opportunity to develop our economic ties with our southern Mediterranean neighbours.’

To achieve this, however, it will also be necessary to implement essential reforms regarding the rule of law and good governance. These are urgent, both in order to restore citizens’ confidence in the future of their societies and for the region’s economic development. In particular, we will need to help governments that are ready to move forward in these areas.

It will be a major geopolitical challenge to develop closer relations with our Southern Mediterranean neighbours. In order to become more effective in this area, we will have to act at the highest level, and in concert. The joint engagement of all the EU Member States in this partnership is essential both as regards security and in the field of economic cooperation. Their diplomatic networks, the long-standing cooperation between them and the Southern Mediterranean countries, as well as their capacity to mobilise private actors from EU countries, will be essential if we are to achieve the ambitious goals that we have set for ourselves.

‘The joint engagement of all of the Member States of the EU in this partnership is essential both as regards security and in the field of economic cooperation.’

In order to demonstrate this collective engagement, we must send a strong political signal. That is why I have suggested that Heads of State or Government hold regular meetings at the highest level with all the States in the region, as we do in the context of our Eastern Partnership.

Given the scale of the challenges facing the Mediterranean, we will need to act with all the determination required to successfully address these together in the coming years. In particular, we will need to work in the spirit of 'Team Europe', closely coordinating the activities of the Member States and the Commission. The Heads of State or Government strongly encouraged us to do so on 26 February last.