In December 2022, Operation EUNAVFOR MED IRINI investigated 348 merchant vessels via radio calls (out of 8,146) and carried out 12 visits on ships with Masters’ consent (out of 420). The Operation also monitored 21 suspect flights (out of 1,085) and continued to monitor 25 airports (and landing strips) and 16 ports (and oil terminals). Through the Crime Information Cell, the Operation issued 2 (out of 75) recommendations of inspection of a suspect vessel in EU Member States’ ports. 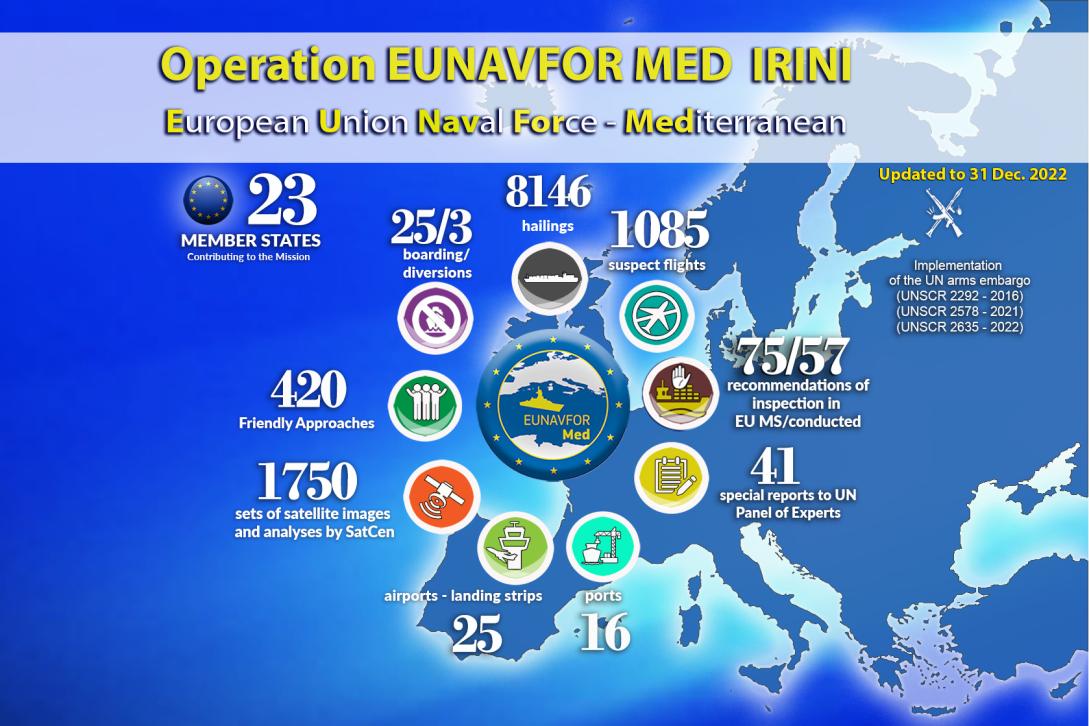 Since its launch, Operation EUNAVFOR MED IRINI has boarded and inspected 25 suspect vessels. On three occasions, IRINI seized the cargos assessed to be in violation of the UN arms embargo and diverted the vessels to a port of an EU Member State. One flag State (Turkey) has denied the consent to board and inspect suspect vessels on nine occasions. Operation IRINI has also investigated 8,146 merchant vessels through request of information via radio calls (hailing) and visited 420 vessels upon their Masters’ consent (so-called friendly approaches).

Furthermore, the Operation has investigated 1,085 suspect flights, 25 airports and 16 ports, and provided 41 special reports to the UN Panel of Expert on Libya, most of which referred to violations or possible violations of the arms embargo and oil smuggling activities in the West and in the East of the Country. Finally, through the embedded Crime Information Cell, the operation issued to the relevant Law Enforcement agencies 75 recommendations for inspection of suspect vessels in EU Member States’ ports, 57 of which were conducted.

Inspections or friendly approaches are always carried out in accordance with the relevant UN Security Council Resolutions framework, in full respect of the international law, without undermining the vessels’ schedule of activities. Furthermore, COVID-19 preventive measures are always implemented during these activities.

Beyond Disinformation - Protecting Freedom of Speech

Beyond Disinformation - What is FIMI?