Operation IRINI and the search for peace in Libya

HR/VP Blog - It has been one year since the launch of the EU’s naval Operation IRINI. On 18 and 19 March, I visited IRINI’s Headquarters in Rome, the air base Sigonella and one of our four ships currently at sea - the FGS Berlin. My visit comes at a critical juncture for Libya and the international efforts to support the search for peace: we are beginning to see a more hopeful phase. 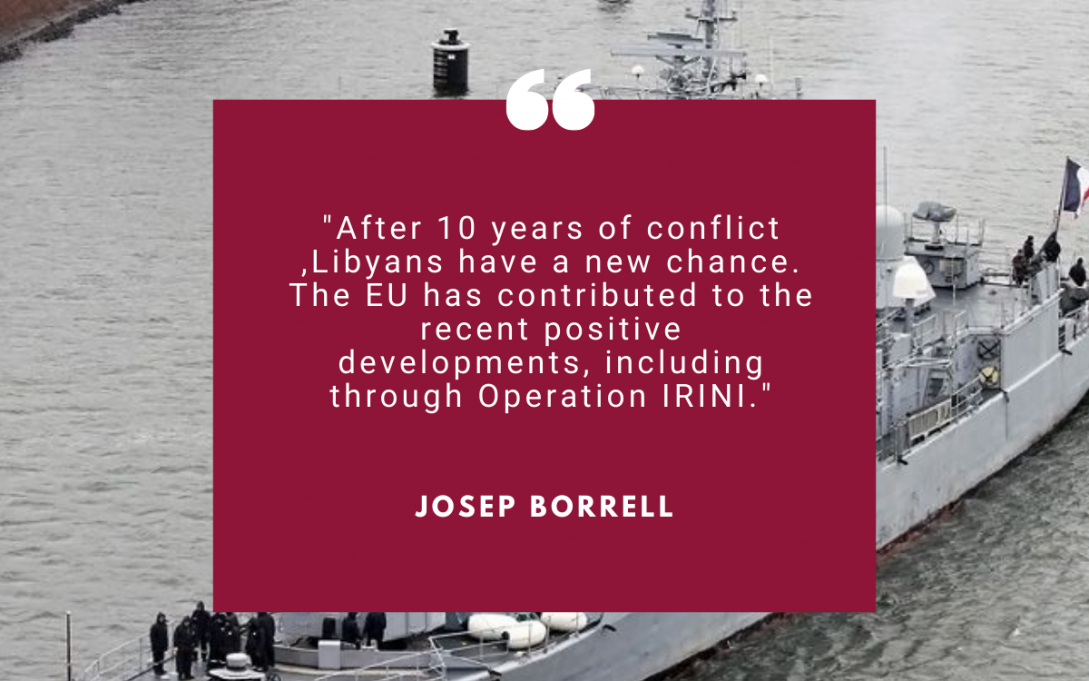 I have said before that the Libyan conflict had become ‘a theatre of proxy wars’, right on the EU’s doorstep. As EU we should do whatever we can to help bring an end to the fighting and support a genuine political settlement, even if we know how difficult this will be.

"After 10 years of conflict in Libya, the country and its people have a new chance."

After 10 years of conflict in Libya, the country and its people have a new chance: a ceasefire agreement is in place, a political process is under way, elections are scheduled for the end of the year, and an interim government was just sworn in. I am proud that the European Union has been able to contribute to these positive developments, including through Operation IRINI.

At the Operation’s Headquarters in Rome, I had the opportunity to see how the Operation monitors and tracks ships and airplanes suspected of violating the UN arms embargo and coordinates action at sea. In Rome, I also met with Foreign Minister Di Maio and Minister of Defence Guerini, whom I thanked for Italy’s contribution to one of the most significant European operational engagement at our doorstep. We had the occasion to discuss also other important issues that are on the agenda at the moment.

At the Sigonella Air Base and on board of one of the four ships currently deployed in the central Mediterranean, FGS Berlin, I paid tribute to the hard work done by all the women and men serving this Operation. While on board of the German ship, the FSG Berlin, I also spoke with the Minister Kramp-Karrenbauer and expressed my gratitude for Germany’s contribution to the Operation and more broadly to the peace process in Libya.

"Naval assets from France, Italy, Greece and Germany; a Lithuanian boarding team serving on a German ship; a Luxemburg plane next to a Polish one; staff of six different nationalities working together in the same room of the Joint Operation Centre: this is European defence in action."

At the same time, with 24 Members States contributing to the operation, Operation IRINI is a truly European endeavor. Naval assets from France, Italy, Greece and Germany; a Lithuanian boarding team serving on a German ship; a Luxemburg plane next to a Polish one; staff of six different nationalities working together in the same room of the Joint Operation Centre: this is European defence in action.

Implementing the arms embargo on Libya

Let me recall how the EU came to launch IRINI. In January 2020, at the Berlin Conference on Libya, the implementation of the UN arms embargo was recognised as a priority. As long as weapons are flowing into Libya, it is difficult to build sustainable peace. The EU took the decision to act. It was not an easy process. Some feared the so-called ‘pull factor’ for migrants, which in fact never materialised. It took some time to explain, convince and reassure. Reaching unanimity often is hard, but we managed. Together with member states, we carried out all the necessary planning in just six weeks, and the EU was able to launch Operation IRINI on 31 March 2020.

With IRINI, we also contribute more broadly to maritime security in an area of strategic interest for Europe. This is what we do also with Operation Atalanta off the coast of Somalia or in the Gulf of Guinea with the new Coordinated Maritime Presences. As the maritime domain is becoming an arena for greater geopolitical competition, our engagement at sea is important for the security of Europe and our citizens.

IRINI monitors violations of the UN arms embargo on Libya occurring at sea but also on land and by air. During the past year alone, it tracked 16 Libyan ports and oil facilities, 25 airports and landing strips and close to 200 flights suspected of carrying military related cargos to and from Libya. For that purpose, IRINI can also rely on the information provided by the European Union Satellite Centre (EU SATCEN), thus demonstrating the importance of this capability to European security.

Operation IRINI is sharing this crucial information with the United Nations. So far, IRINI has sent more than 20 classified reports to the UN Panel of Experts on violations of the UN arms embargo. However and despite all our efforts, the latest UN Panel of Experts’ report issued just this week concluded that this embargo is “totally ineffective”. We know that, unfortunately. This is fully consistent with our own assessment and confirms the need for an Operation like IRINI. The report also acknowledges the good cooperation with Operation IRINI, the only actor implementing the arms embargo and serving at the same time as a deterrent. So we have to step up and broaden our efforts.

It is worth recalling that IRINI can only inspect suspect vessels in accordance with UN Security Council resolutions and the International Law of the Sea. It cannot intervene on-shore, nor intercept planes. But we do know exactly what the spoilers are doing because IRINI is watching them. It is now up to the Security Council to take action in the light of this report. It is crucial that all UN member states abide by their obligations to implement the arms embargo and that all flag States comply with the Security Council’s call to cooperate with inspections.

Operation IRINI’s mandate is set to be renewed for a further two years. We will continue to monitor suspect vessels, regardless of their provenance. In accordance with relevant UN Security Council resolutions, we will conduct inspections with the highest degree of professionalism.

Libya today is more stable than before but it isn’t yet at peace. There is a window of opportunity for Libya, which must be seized. As EU, we are ready to do more to help end the conflict and further support the UN-led peace process.