My first visit outside the European Union in my capacity as High Representative took me to India. Over the course of two days, I met with members of the Indian government and addressed the annual Raisina Dialogue – India’s flagship conference on geopolitics and geo-economics. 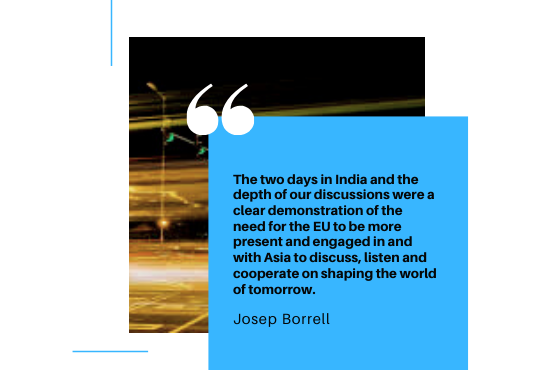 75 years after the end of World War II and more than 70 years since India’s independence, the European Union and India are now the world’s largest democracies. The progress the India managed to accomplish during this period is impressive: life expectancy has increased from 31 in 1947 to 72 years; literacy more than quadrupled from below 20% to 80%. Most strikingly, it has seen a population growth of 274%. It is worth noting that there are areas in which India was more advanced than some European countries. For example, Indian women have already been granted the right to vote in 1927, while women’s suffrage in France was only introduced in 1944.

India’s exponential population growth will lead it, soon, to surpass China: in 2018 India had 1,370 million inhabitants (China 1,390 million). And according to projections, between 2030 and 2040 the Indian population will exceed that of its neighbour by 8%, and between 2050 and 2060 it will do so by 25%. India’s privileged geographical location - embedded in the Indo-Pacific Ocean, through which 90% of world’s trade travels - places it in the global geopolitical vanguard.

India is increasingly acknowledging that, in the current climate of global uncertainty and growing Chinese assertiveness, the EU is becoming a key political partner. This is a welcome shift, since India has traditionally perceived the EU mainly as a trade bloc. Discussions over the past year, in particular on issues such as Iran/Joint Comprehensive Plan of Action (JCPOA), connectivity, China, Afghanistan, the crises in the Maldives and Sri Lanka, maritime security and counter-terrorism, as well as emerging military contacts, have all helped to raise the EU’s profile.

Regardless of geographic distance and different histories, India and the EU share common values and common interests. We need to work hand-in-hand, reinforce our strategic partnership, and together, strengthen the rules-based international order that both of us want to uphold.

During my visit, we agreed to join forces in support of the sustainable modernisation of India. And to work jointly on supporting multilateralism and the rules-based global order by defending the work of the United Nations, the World Trade Organisation and the G20. India will chair the G20 in 2022, when it will celebrate the 75th anniversary of its independence.

Today our cooperation revolves around the key challenges that Indians, Europeans and indeed all citizens around the world are facing. Our exchanges in New Delhi demonstrated that we have a shared ambition to scale up our partnership in areas such as climate change, connectivity, the digital agenda or the fight against terrorism. The new EU-India Roadmap to 2025, which will be adopted at the Summit, will provide a list of concrete joint actions for the next five years.

These points were central in the bilateral encounters I had during the Raisina Dialogue with India’s Prime Minister Narendra Modi and the Ministers of External Affairs Jaishankar and of Defence, Singh. We discussed the main priorities of our partnership and how to strengthen security and defence cooperation and the deepening of our economic ties.

This new momentum in EU-India relations paves the way for the next EU-India Summit, which will take place on 13 March, and will provide us with an opportunity to look even more truly at EU-India relations. I invited Minister Jaishankar to join the next meeting of the Foreign Affairs Council in February, so we can have an exchange with the 27 EU Foreign Ministers on the preparations of the Summit.

I also took the opportunity of my presence at the Raisina dialogue to meet Iranian Foreign Minister Zarif, as well as the foreign ministers of Australia, South Africa and the Maldives. In all these meetings, we elaborated on the key topics that I covered in my speech: the EU’s role in contributing to global peace and security, the ongoing crises in the wider Middle East, a region that is far more destabilised than when I attended the Raisina Dialogue one year ago, as well as the need to revitalise multilateralism as the basis for stability and prosperity.

The two days in India and the depth of our discussions were a clear demonstration of the need for the EU to be more present and engaged in and with Asia – to discuss, to listen and to cooperate on shaping the world of tomorrow.