Recovery plan: Europe's role in the world is at stake

Tomorrow, European leaders will discuss the proposal for a new EU budget, also known in our jargon as the “multiannual financial framework (MFF)” for the years 2021-2027. Adding the 750 billion euros of the Next Generation EU instrument makes a considerable change from the initial draft budget presented by the Commission back in 2019. 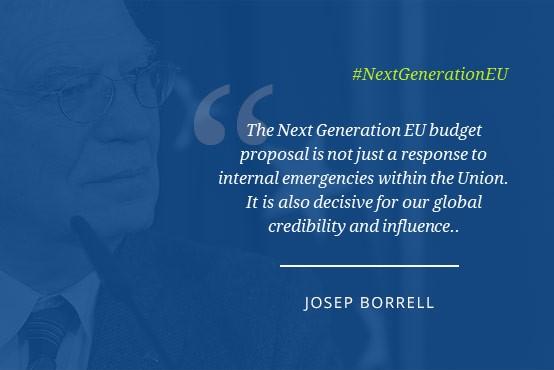 Given the size and significance of the proposal, difficult political discussions lie ahead. If the proposal is adopted, the EU will have significant additional resources to combat the social and economic damage caused by the Coronavirus epidemic and to prepare ourselves for our main future challenges: tackling climate change and the digital revolution. We must repair the short-term damage from the crisis in a way that also invests in our long-term future. Let us not forget that the Southern European countries most affected by the consequences of the Coronavirus pandemic still bear many scars from the previous crisis. As a result, they have fewer means to support their populations and revive their economies. In this regard, the increased budgetary solidarity proposed with the Next Generation EU plan is of historic relevance.

The proposed European Recovery and Resilience Facility of €560 billion will offer financial support for investments and the resilience of national economies, in line EU priorities. This support will be available to all Member States, but it will be concentrated on the most affected countries, where resilience needs are the greatest.

Increased external action package to a total of 118 billion euros

However, it is not just a response to internal emergencies within the Union: the proposal is also significant for our external policy. The proposed MFF foresees an additional 15.5 billion euros for external action with a package totalling 118 billion euros for the period 2021-2027. It provides significantly higher means for humanitarian aid, for helping our partners and for enhancing international cooperation.

In addition, there is also, after earlier cuts, €8 billion euros foreseen for the European Defence Fund and 8 also for the European Peace Facility (the latter is off-budget fund, meaning not part of the MFF). The former will boost common research and development of necessary defence capabilities in Europe. With the later we will strengthen Europe’s role as security provider, including working with partners to support them with training and advice and, sometimes, military equipment. Both are central for the credibility of Europe.

But it’s not the only way, the proposed recovery plan will be useful to strengthen our external action. Our ability to overcome the major shock caused by the Coronavirus epidemic will significantly influence Europe's place in the world.

This new shock comes just 10 years after the sovereign debt crisis. The past decade’s protracted economic difficulties and the internal political debates have weakened Europe's position in the world. In this same period we had inward-looking debates, tensions and conflicts were multiplying on our periphery - in Ukraine, the Sahel, Syria and Libya, etc. - and powers with values other than ours were asserting themselves on a global scale. The focus on internal problems made it easier for these powers to try to divide the Union and limited our ability to develop a common approach.

It is essential not to repeat such internal struggles and some of the mistakes of the former crisis. We have to overcome this crisis jointly, to avoid that our credibility will be undermined and our position weakened.

At the beginning of the coronavirus crisis, we encountered significant difficulties in coordinating our national health policies. However, the EU and the Member States have by now provided a strong economic and social response to the pandemic. And even though many companies and citizens have encountered serious difficulties, Europe’s high social protection nets, which are unparalleled anywhere in the world, have cushioned the immediate effects of the crisis better than elsewhere.

Nevertheless, and this is where Next Generation EU comes in, the matter is far from settled: unemployment is growing, the path of recovery will be quite slow in many countries and sectors, and the risk of a second wave will hamper economic activity and investment. All that at a time when we have to accelerate the transformation of our economies to meet the enormous challenges of climate change and the digital revolution.

The Next Generation EU initiative also allows us to show that our social model has not only enabled us to limit the immediate effects of the pandemic. But also, that this ordeal has increased our cohesion and solidarity, while enabling us to mobilise significant resources and to better prepare for future challenges.

And with the current tensions between China and the United States there is a global battle of narratives going on, a struggle for influence through spinning debates on who was most successful in managing the Coronavirus pandemic.

In short, if we succeed with the recovery, we will strengthen our internal Union and we also strengthen Europe's credibility and position in the world.