The Regional Comprehensive Economic Partnership – what does it mean for the EU?

HRVP Blog - The ten countries of ASEAN and five Asia-Pacific countries (China, Japan, Korea, Australia and New Zealand) have just agreed a major trade deal that covers 30% of the world’s population and GDP. As the European Union, we welcome rules-based, multilateral economic integration and we should be pro-active by enhancing our engagement in and with ASEAN and the Indo-Pacific region. 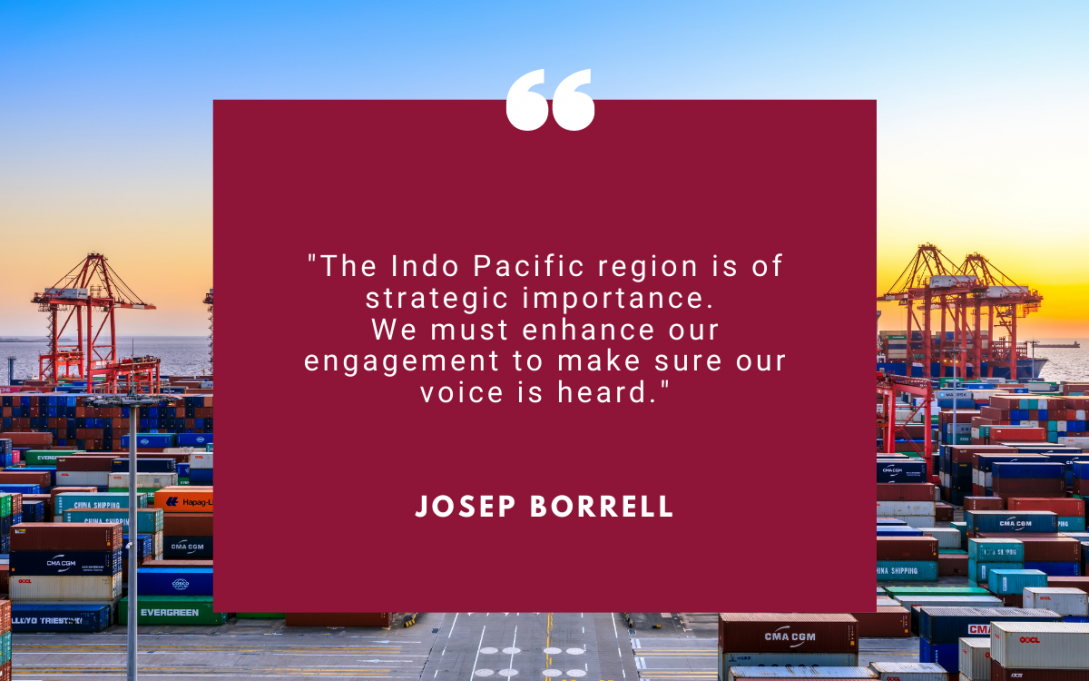 The signing of the Regional Comprehensive Economic Partnership (RCEP) has created the world’s largest free trade zone stretching from the border of Kazakhstan to the South Pacific. It has triggered many headlines notably about the sheer size of the deal, the prominent role of China and the fact that the US and India are not a party. Trade deals are rarely just about trade: they also have wider political ramifications.

The Indo Pacific region is of strategic importance to us. We must enhance our engagement to make sure our voice is heard and the overall architecture of regional cooperation remains open and rules-based.

Some in Europe may wonder, have we missed out? Is the European Union weaker because 15 other countries have signed a free trade deal without us? The answer is no. Just as we believe in free and fair trade and in multilateralism as the route to get there, so we can be happy when others also take this path to enhance their own prosperity. And by growing the global economy, RCEP will help provide more – not fewer – opportunities for trade with the region, just as our own Single Market provides opportunities for them. As EU we tend to have more ambitious FTAs with almost all countries in the RCEP agreement.

Still, as EU we should pay close attention and be mindful of the strategic stakes involved: the Indo Pacific region is of strategic importance to us. We must enhance our engagement to make sure our voice is heard and the overall architecture of regional cooperation remains open and rules-based.

What is in the RCEP agreement and what does that mean?

The main effect of the RCEP is to have bundled together the various Free Trade Agreements that ASEAN has with the five other Asia Pacific countries into a single framework. It covers trade in goods but does little to reduce non-tariff barriers. It excludes most services but also agriculture, which is a sensitive sector. It is a ‘shallower’ agreement than the existing EU FTAs with the region. And it cannot be compared with our own Single Market. But that was never the point.

More than 30 negotiating rounds over eight years, numerous Ministerial meetings and three Leaders’ Summits have resulted in a significant achievement and, as the Asian leaders said on Sunday, brought “an unprecedented mega regional trading arrangement that comprises a diverse mix of developed, developing and least developed economies of the region.”

The timing of the deal is also significant: it is a sign of the members’ commitment to rules-based trade and investment in the era of unilateral reward and retaliation

While we in the EU are still studying its 20 chapters, 510 pages and annexes, its apparent achievements are clearer in the scale than in the depth of its coverage: 30% of the global population and GDP, 28% of global trade, and including five members of the G20. A major benefit will be the harmonisation of rules of origin that will also help European businesses in the region, allowing companies to ship products across the region more easily without encountering different rule of origin criteria for each step in the manufacturing process or in each country crossed. This will lower costs for all companies with supply chains stretching across the region. The agreement also makes progress as regards intellectual property rights.  At the same time, it appears that labour rights and environmental standards, which are integral to EU FTAs, are missing from this agreement.

The timing of the deal is significant: it is a sign of the members’ commitment to rules-based trade and investment in the era of unilateral reward and retaliation. It also comes when all economies look for ways to recover from the ravages of Covid-19. More specifically the signatories have stressed how this deal signals their commitment to inclusive and sustainable development, job creation and strengthening regional supply chains. These are goals we all share.

The EU and ASEAN: a partnership of strategic importance

Our economic ties to Southeast Asia are robust. For many years the EU has been the largest source of Foreign Direct Investment flows into ASEAN and one of its largest trading partners.  We already have key free trade agreements in place with Singapore and Vietnam, plus Japan and Korea and have negotiations underway with several more, including Indonesia, Australia and New Zealand.  These agreements have helped sustain trade despite the pandemic, for example through major increases of imports from Singapore of vital organic chemicals and pharmaceuticals.

Given everything that is going on in the world, we see ASEAN as a natural partner and like-minded advocate of regional integration and multilateralism.

At the same time, we need to go further. With ASEAN we have great ambitions to expand our engagement, from trade to connectivity, from digital transformation to joint efforts to promote regional and global security. It is our hope to be able to lift our cooperation soon to the level of a Strategic Partnership. Given everything that is going on in the world, we see ASEAN as a natural partner and like-minded advocate of regional integration and multilateralism.

The Indo-Pacific region: which balance and whose rules?

Given the many security crises in our neighbourhood, I inevitably have to direct much of my attention to events happening close to our borders. However, I am convinced that the Asia-Pacific is our economic neighbourhood.  Therefore, we have a stake in how the region develops.

The RCEP agreement is evidence of ASEAN’s success in managing to place itself at the heart of its region despite big powers tending to throw their weight around. ASEAN has also developed an ‘Outlook on the Indo-Pacific’, which against a backdrop of growing security and political tensions, emphasises the need for the region to remain open, stable, inclusive and rules-based. It is clear that the Indo-Pacific will be the most dynamic region in the world and the centre of growth for decades to come. The success of the region in handling the COVID-19 pandemic, certainly compared to Europe and the US, have further reinforced this trend.

The EU should engage more with the broader Indo-Pacific region. As elsewhere, the key question is what will be nature of the regional order?

I am determined to expand our cooperation with ASEAN and develop our own view on how the EU should engage the broader Indo-Pacific region. As elsewhere, the key question is what will be nature of the regional order? As I have said before, agreed rules make states secure, people free and companies willing to invest.

Many years ago, in February 2015, President Obama said when signing the Trans-Pacific Partnership, that agreements like these allow us “to write the rules of the road in the 21st century.”  But history took a different turn when President Trump withdrew from the TPP in his first days in office (which eventually went ahead anyway, without the US, and became the CPTPP).

Now, nearly four years later and at the end of President’s Trump term in office, the US finds itself outside again as another mega trade deal is concluded. Many have commented on the wider ramifications of these decisions. Indeed a paper by the Peterson Institute for International Economics has suggested that, “The exits [of India and the US] reflect similar motives in both countries, including nationalist policies on one hand, and fears of losing ground to China in economic and strategic competition on the other.”

The emergence of this gigantic Asian free trade zone should also be a decisive incentive to Africa and Latin America to accelerate their plans of regional integration. Without doubt, the size of the market and the common rules set by RCEP have a direct effect on the investment climate in emerging economies. Both Africa and Latin America should do everything within their reach to adapt to a new competitive landscape.

Globalisation is not dead. Asians show us that they can adapt to it and shape it, through multilateralism. Europeans should be proactive in the Indo Pacific and have a position towards China that is firm but also open. Like Japan, a signatory of RCEP and one of our main allies.

In all this, we should remember that we are not closed camps: we trade both within and between us and we share many challenges. That’s why the EU must seek to work with its partners in Asia and the US, to write the rulebook of the 21st century in an open and collaborative manner.