The Sahel: a shared responsibility

On Monday 13 January, I took part in the Pau Summit together with the Heads of State of the G5 Sahel (Burkina Faso, Mali, Mauritania, Niger and Chad) and French President Emmanuel Macron. 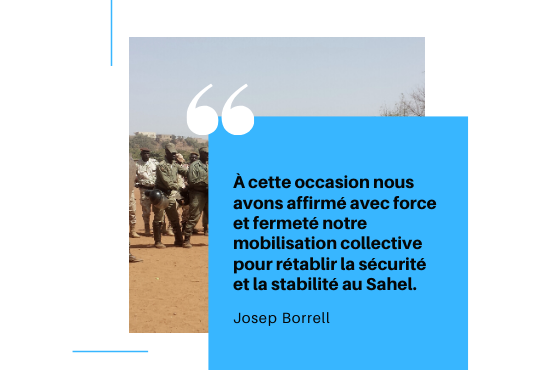 We took that opportunity to affirm in the strongest terms our shared commitment to re-establishing security and stability in the Sahel.

The meeting took place in the context of a worsening security situation in the region, which has seen an unprecedented number of deadly attacks in the past few weeks.

The figures are more than just alarming: Those figures serve only to underline the importance of and need for our collective commitment with regard to the Sahel. That commitment is considerable and unprecedented, in terms of both the amounts made available and – above all – the durability and intensity of our political and human investment. Since 2014, the EU – the Commission and the Member States – has mobilised more than
EUR 8 billion in order to respond to the multiple challenges posed by the region.

Unfortunately, there is no room for complacency. On the contrary, as the French President stated at the Summit’s closing press conference: ‘We have no choice; what we need now is results.’

We must indeed do more, and we must act differently and more effectively. And we must do so together, within the framework of a partnership in which each of us assumes our responsibilities. Our joint action needs to be rethought in order to be more effective and better understood by the populations concerned. Our dialogue with our partners in the Sahel must be more open and more detailed, and based on mutual trust, if we are to overcome the tension set up by terrorism which seeks to cause divisions among all those who want peace in the Sahel.

Let us never forget: the solution cannot be one that is based solely on security. It is essential that the Sahel states assume political responsibility, not only in order to ensure that the EU’s support is effective, but also with a view to establishing lasting security, development and peace in the Sahel.

As I stated very clearly in Pau, the bulk of the solution can come only from our partners in the Sahel. We must spread peace where others wish to spread war. People’s trust in the state must be restored by striking the right balance between measures promoting security, on the one hand, and those supporting development, on the other. Peace is achieved more through consistent and inclusive public policies – in particular, by re-establishing the social contract with all components of society – than with weapons. And that is something that only our partners in the Sahel can achieve.

On the basis of such mutual accountability, the European Union will step up its efforts in the Sahel. That is the message we wanted to convey in Pau, and I will reiterate it to the EU Foreign Affairs Ministers at the meeting of the Foreign Affairs Council on 20 January.