Shaping the future: space as strategic issue for Europe

These days in foreign policy we understandably spend a lot of time dealing with crises, from Libya to Iran, Iraq, the Sahel and beyond. At the same time, it is critical to take time out and address longer-term strategic issues. The future of space is one and I was glad that on 21 January I could open the 12th European space conference. 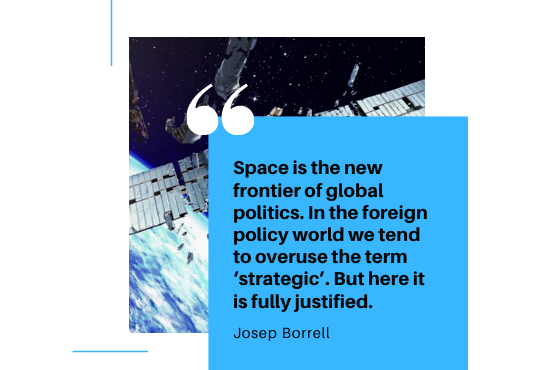 It brought me back to my previous life. I am an aeronautical engineer by training at the Polytechnic University of Madrid. Recently, my school changed its name, adding the word space, so it is now the ‘School of Aeronautics and Space Engineering’ which shows you the growing importance of ‘space’.

I also remember when I was Minister of transport in 1992 when Spain launched its first telecom satellite from French Guyana, with an Ariane. At that time, the opposition was saying that it was a waste of public money. Now we all know how crucial these satellites are and how they present excellent value for money.

What was striking at the conference was the sense of urgency and possibility that united all who were present. It is clear that only a coherent European space policy, that takes into account its geostrategic nature and with adequate financial resources behind it, can make sure we Europeans achieve our goals and protect our interests in a more competitive setting.

In essence, space is the new frontier of global politics and a strategic issue for Europe. Satellites and other space-based assets are essential for the functioning of our economy: some 60% of the global economy depends directly or indirectly on space-based tools. But space is also increasingly a key component of the global security equation.

The rise in geo-political tensions we see on earth is being extended and projected into space. Just look at some key developments:

Russia has developed several counter-space capabilities, from ground-launched anti-satellite missiles to inspection satellites and lasers able to blind satellites or interfere with their communication systems. China is setting up specialised space units and has begun operational training with counter-space capabilities. India, meanwhile, conducted an anti-satellite test in March 2019 and is setting up a Defence Space Agency. Last December, the US created a formal Space Force as the 6th branch of the US military. Last June, NATO adopted a formal space policy. And just last week, Japanese Prime Minister Abe announced the creation of a space defence unit.

Against the backdrop of this ‘space race’, let us remember that in the past space also enabled people, including former enemies, to work together for ambitious, transformative goals such as the joint work of the International Space Station. It will be important to try to maintain this collaborative approach and spirit.

Europe has a massive stake in the future of space. Thankfully, Europe has a solid track record of acting together over many years which led to concrete successes. Take Copernicus, the world's largest provider of Earth observation data, including on natural disasters, most recently the Australian bushfires. Or think of Galileo which now has more than 1 billion users, a major sign of success and which is adding new services such as supporting search and rescue operations.

I am convinced the EU has to play its full role on space, across all dimensions. The EEAS has been at the forefront of promoting a sustainable approach to space, tackling orbital debris and promoting confidence-building measures. We should redouble our efforts to uphold and develop the normative framework for space, in the UN and elsewhere.

Space should also form part of our wider approach to enhance European strategic autonomy. From the security and defence perspective, space forms part of the capability development priorities agreed by Member States and space-based data already assist our CSDP missions and operations. It is highly relevant for ongoing discussions on what the EU could do in Libya to monitor the arms embargo. It is clearly a capability the Union needs be able to conduct the most demanding military operations in the future.

Beyond security and defence, space is a catalyst for the development of critical technologies for many strategic sectors such as digital, Artificial Intelligence and energy to name a few. We should reinforce synergies between our space policy and other critical sectors to enable Europe to better face a fiercely competitive global environment.

So to succeed in space, we need to connect the dots. Making these connections between different perspectives and work strands lies at the heart of my role as High Representative and Vice President of this “geopolitical Commission”. I will do my utmost to help bring about a coherent EU approach to space.

While we fight the fires in our neighbourhood, we also need to shape the future. Protecting our security and economic interests in space is a strategic issue for Europe. Let’s treat it as such.