Solidarity is essential in the face of an unprecedented global crisis

On 23 June I had the opportunity to speak before the Parliamentary Committee for the Economic and Social Reconstruction of Spain after the COVID-19 pandemic, in the Congress of Deputies. It was a great honour to appear in Spain’s parliament for the first time since my appointment as High Representative of the Union for Foreign Affairs and Security Policy. 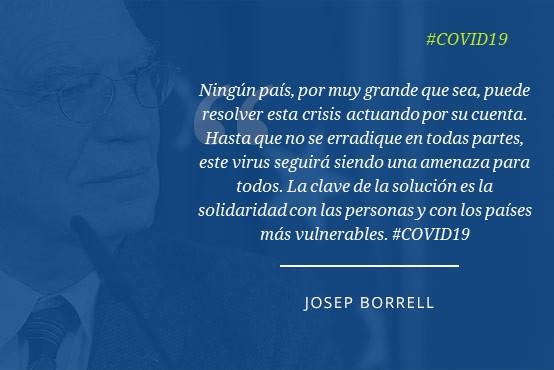 No country, no matter how big, can resolve this crisis on its own. This virus will continue to be a threat to everyone until it has been eradicated everywhere. The key to overcoming it is solidarity with the most vulnerable people and countries. #COVID19

I expressed to the parliament my optimism about the European response to the crisis, specifically in relation to the recovery fund the Commission has proposed, which has the potential to be a powerful forward impetus for European integration.

To be able to exchange views on this plan with members of the Spanish parliament was very rewarding. It is a subject into which I have already had the opportunity to go deeper in this blog post.

But in my speech in Congress I focused above all on the way this crisis is shaking up the entire world. It is a global crisis that will have significant geopolitical consequences, to which we will have to adapt our foreign policy.

Since appearing in Wuhan at the end of 2019, the virus has spread to over 200 countries. Although we have managed to reduce the number of infections in the European Union, around the world the virus is continuing to spread.

The epicentre of the pandemic has shifted, moving from China to Europe and later to the USA, which is at present the part of the world with the largest number of cases. The situation in many emerging and developing countries is very troubling, especially in Latin America, the region where the virus is spreading fastest.

Governments all over the planet have responded to the coronavirus with what the IMF has called the ‘great lockdown’. The lockdown measures will result in the biggest global economic recession since at least the Second World War. Although we do not yet know the exact magnitude of this crisis or how long it will last, the latest IMF and World Bank forecasts suggest that it could become three times deeper than the 2008-2009 crisis that was dubbed the ‘Great Recession’.

This crisis is exceptional not only in its intensity, but also in its worldwide impact. According to the World Bank, this recession has affected the largest number of countries at once since at least 1870.

This crisis will also cause – or rather is already causing – a social crisis, from which the richest countries on the planet will not be spared and the real and political consequences of which we cannot yet discern. And in the poorest and most vulnerable countries in the world we are witnessing a real humanitarian tragedy.

Among developed countries, the euro area is expected to see the sharpest drop in 2020. The USA and Japan are also expected to fall steeply, though less so. China’s economic activity is not expected to drop in 2020, but its growth will be reduced to 1 %, the lowest figure since 1975.

Some observers conclude from the reduced growth of the Chinese economy, contrasted with the massive decline in GDP in advanced countries, that the pandemic will intensify the shift in the world economy’s centre of gravity towards Asia.

For all developing countries except China, the World Bank is predicting the most severe economic contraction since at least 1960, the first year for which data are available. These countries will be seriously affected by the slowdown in world trade, which will drop even further than in the 2008 crisis. Foreign investment will fall in many countries. Remittances from emigrants are seeing a complete collapse, which constitutes a serious setback for many emerging and developing countries. The effects will be particularly severe in Latin America and the countries of Europe, Central Asia, the Middle East, North Africa and sub-Saharan Africa, partly because of the drop in prices of raw materials.

The extensive informal economy that exists in many of those countries will worsen the health consequences of the pandemic. Bear in mind that the informal sector represents two thirds of jobs on average in emerging and developing countries. The lack of social security safety nets prevents informal-economy workers from staying at home, because they have to work to be able to meet their most basic needs. For some countries, the economic crisis could have consequences even more serious than those of the virus itself.

Solidarity – the key to responding to the crisis

No country, no matter how big, can resolve this global crisis on its own. The key to overcoming it is solidarity with the most vulnerable people and countries; solidarity not just for altruistic reasons, but also in our own interests.

This virus will continue to be a threat to everyone until it has been eradicated everywhere. A vaccine must be made available as soon as possible for most of the world’s population, not just for the richest countries. This too requires solidarity.

Solidarity is also required in order to emerge as soon as possible from the devastating global economic crisis caused by the pandemic, because the world’s economies are deeply interconnected, much more than they were at the time of other global crises that some of us can recall.

We are all in the same boat, and we have hit an iceberg. At this point, it makes little difference who was booked in first-class and who in second-class cabins. Now that we have crashed, what we need to do is make sure between us that the boat doesn’t sink.

So for our part, with the EU’s Member States we have launched the ‘Team Europe’ package, which has already mobilised EUR 36 000 million to help our partners around the world. We have also released EUR 9 000 million to speed up the development of a vaccine against COVID-19, and we support the action of the WHO, which we would like to see strengthened.

Beyond this immediate response, it is still too early to assess the significant change in the global balance of power which this crisis will certainly bring about. As for the European Union, our future place in the world will depend to a large extent on the success of the recovery plan that is currently under discussion.