Space and defence: protecting Europe and strengthening our capacity to act

HR/VP Blog - The current geopolitical context shows how important it is to strengthen EU’s defence policy. More generally, what we classically understand by “defence” is evolving to encompass more and more other domains, such as cyber and outer space. Last week, the European Commission adopted two important “packages” on defence and space policies. They contribute to the on-going work on the Strategic Compass. 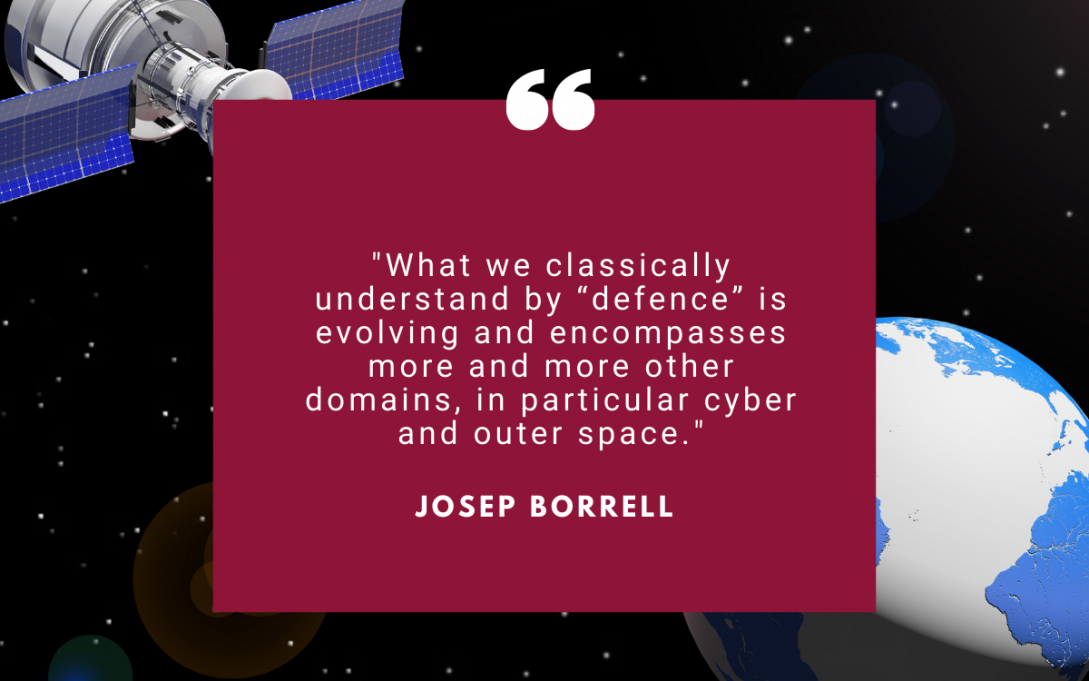 Space has become a strategic domain and an essential enabler for most of our daily activities, whether the Internet, telecommunications, or the movement of people, ships, aircraft or vehicles. In addition, it plays a central role in security and defence; for example, the United States created in 2019 a US Space Force. Therefore, we need to guarantee our ability to operate securely and constantly the infrastructures essential to our societies, including against threats in outer space. Last November, Russia deliberately destroyed one of its satellites, an irresponsible act that generated dangerous debris.

“We need to guarantee our ability to operate securely and constantly the infrastructures essential to our societies, including against threats in outer space.”

But space is also an important area of interest for me on a more personal level. From background, I am an aeronautical engineer. One of my first ministerial posts in Spain, as Minister for Telecommunications, led me to launch the first Hispasat satellite in 1992. Since then, I have never ceased to follow closely this sector, which has become essential for our societies. Europe is a significant space power: its space sector had a turnover of €74 billion in 2019, which represents between 15 and 20 % of the world market, with 48,000 employees working directly in this sector. The EU is increasingly involved, with the best known EU success stories: Galileo for positioning, navigation and timing and Copernicus, the largest Earth observation system. Under the steering of my colleague Commissioner Breton, the Space Programme has been allocated 13,2 bln EUR in the new Multiannual Financial Framework – the largest ever space budget at EU level. However, we need to do more in the future to keep up the pace, remain a leading space power and enhance our strategic autonomy in that field,.

We face also a growing problem: space is becoming increasingly congested due to a huge increase in satellites and space debris. Just to give some figures: since the beginning of the space era, in the 1960s, humanity has put in orbit 11,800 satellites of which 4,550 are currently operational. More than 20 000 new satellites are expected to be launched in the next 10 years – and this is just a conservative estimate. On top of that, there are over 128 million pieces of debris smaller than 1 centimetre orbiting Earth, and almost one million between 1 and 10 centimetres. The majority of debris is found at altitudes below 2,000 km, reflecting the space activity that takes place mainly in low earth orbit (Earth observation satellites, telecommunications satellite constellations, most military satellites…). This space debris has an average speed of 7-8 km/s, or 25-29,000 km/h.  At these speeds, even if the debris is small, in case of collision, the impact is very destructive because the kinetic energy is the product of the mass of the debris and the square of its speed: a one-centimetre debris has about the same kinetic energy as a car travelling at 130 kilometres per hour…

“Debris threatens our space services. It risks affecting our daily life, our economies and societies, as well as our security and defence.”

This threatens our space infrastructure and space services. It risks affecting our daily life, our economies and societies, as well as our security and defence. Indeed, space is also a strategic enabler for defence capabilities. There is therefore a real need for the EU to contribute to address this global challenge. That is what we have proposed to do, with our Joint communication on Space Traffic Management (STM). We intend to enhance EU capabilities to detect and catalogue more space objects and avoid collisions. We propose to foster EU-led standards and guidelines, to encourage safe conduct by operators, and to work toward a possible legislative proposal on STM rules. What is particularly important for me is the international dimension: space is a global common good that the international community has to protect and manage. Therefore, we aim for a multilateral STM framework at UN level and we will discuss this issue with the US and other key partners. STM is a civilian effort, yet it will also apply to military satellites. The European Defence Agency will help consolidate military needs in that domain.

As part of this week’s space package, the Commission has also proposed to launch a new strategic EU space infrastructure in addition to Galileo and Copernicus. This is a major initiative to equip the EU with a European space-based secure connectivity. In concrete terms, it will provide two services: a governmental highly secured communication service, which will ensure ultra-secured –quantum encrypted – communication with multiple defence and civilian users and a high-speed broadband access service, to provide internet access to all, and reduce the digital divide. The main features of the proposal comprise its security-by-design, which is a precondition for high-end security, and defence use.

“The satellites will have a north/south orbit. So, by design, it can offer Africa high-speed internet, everywhere. This infrastructure could be the first major “Global Gateway” initiative.”

The satellites will have a north/south orbit, which means they will cover all of Africa as well as the Artic. So, by design, they can offer Africa high-speed internet, everywhere. This infrastructure could be the first major “Global Gateway” initiative. Overall, the cost of this programme would be around €6 billion, to which the Union would contribute €2,4 billion. The rest of the financing would have to come from member states and from a public-private partnership scheme.

The Commission has also presented this week a communication outlining its contribution to European defence. This is the result of President von der Leyen’s push towards a stronger EU defence, and teamwork with my colleagues Executive Vice President Margrethe Vestager and Commissioner Thierry Breton.

It proposes to step up investments in defence research and the development of capabilities, notably through the European Defence Fund (EDF), to facilitate synergies between civilian and defence domains, and to incentivise EU joint procurement of defence capabilities, notably through a value added tax (VAT) waiver and new financing solutions. It also proposes to look further into security and defence aspects of space, in line with the Strategic Compass. Lastly, it outlines the Commission contribution to counter hybrid threats and strengthen the EU’s engagement on cybersecurity and cyber defence.

A new roadmap on critical technologies

This communication is associated with a new Roadmap on critical technologies for security and defense, which aims to boost them through European research, development and innovation in close cooperation with member states and like-minded partners, especially the US and NATO. It also aims at reducing strategic dependencies in critical technologies for security and defence. This initiative links up with the work being carried out by the European Defence Agency (EDA) in defence innovation, including through the proposed EDA Defence Innovation Hub. The agenda developed in this defence package builds up on existing work strands and contributes to further strengthening the Strategic Compass, currently being finalised.

With these two packages and with the Strategic Compass, the European Union – EU institutions and its member states - has a unique opportunity to join efforts to advance on these decisive issues. The geostrategic context in which we live in requires nothing less. The ‘proof of the pudding’, as usual, will be in implementation. After the adoption of the Strategic Compass in one month, it will be time for all of us to walk the talk.