State of the Union speech - Building the world we want to live in: A Union of Vitality in a World of Fragility

European Commission President Ursula von der Leyen today mapped out in her first annual State of the Union address, a path for the European Union to overcome the fragility laid bare by the coronavirus crisis and build a union of vitality. 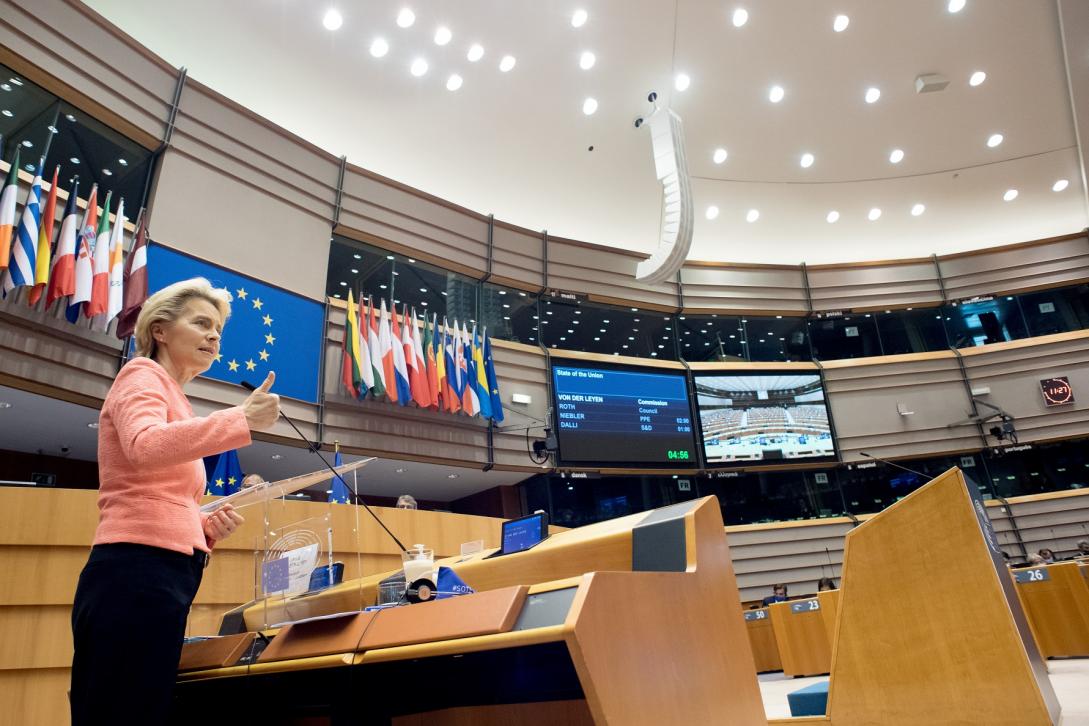 The 2020 State of the European Union debate came at a time of uncertainty with the coronavirus pandemic still affecting all aspects European and global economies and societies. The pandemic has simultaneously shown both the fragility of the global system and the importance of cooperation to tackle collective challenges: “Because this was a global crisis we need to learn the global lessons”.

Von der Leyen underlined that Europe has a once in a lifetime opportunity to make change happen by design with NextGenerationEU and that Europe “has the vision, the plan, the investment” it takes to do so. To enable Europe to become green, digital and more resilient, the European Commission will focus on (see here for main initiatives in more detail):

Regarding the Union’s tasks on the global scale and as global actor, President Von der Leyen called for the revitalisation and reform of the multilateral system, including the UN, WTO and WHO. “It is with a strong United Nations that we can find long-term solutions for crises like Libya or Syria. It is with a strong World Health Organisation that we can better prepare and respond to global pandemics or local outbreaks – be it Corona or Ebola. And it is with a strong World Trade Organisation that we can ensure fair competition for all. But the truth is also that the need to revitalise and reform the multilateral system has never been so urgent. Our global system has grown into a creeping paralysis. Major powers are either pulling out of institutions or taking them hostage for their own interests. Neither road will lead us anywhere. Yes, we want change. But change by design – not by Destruction of the International system. And this is why I want the EU to lead reforms of the WTO and WHO so they are fit for today’s world. But we know that multilateral reforms take time and in the meantime the world will not stop. Without any doubt, there is a clear need for Europe to take clear positions and quick actions on global affairs.”

President Von der Leyen pledged to use Europe's “diplomatic strength and economic clout to broker agreements that make a difference” on ethical, human rights and environmental issues and that Europe should always “be a global advocate for fairness.”

Von der Leyen also tackled various international issues of current affairs and stressed that Europe must deepen and refine its partnerships with its friends and allies. From revitalising and cherishing the transatlantic alliance to strengthening partnerships with the EU’s closest neighbours.

The President reminded her audience that the decision to open accession negotiations with Albania and North Macedonia was truly historic and that the future of the whole Western Balkans lies in the EU. Von der Leyen also gave her reassurance that “we will also be there for the Eastern Partnership countries and our partners in the southern neighbourhood – to help create jobs and kickstart their economies.”

On Africa, Von der Leyen said that the EU-African partnership is a partnership of equals, where both sides share opportunities and responsibilities. “Africa will be a key partner in building the world we want to live in – whether on climate, digital or trade,” she said.

Regarding Turkey, she said that the country is and will always be an important neighbour. She pointed out that “while we are close together on the map, the distance between us appears to be growing. Yes, Turkey is in a troubled neighbourhood. And yes, it is hosting millions of refugees, for which we support them with considerable funding. But none of this is justification for attempts to intimidate its neighbours.”

“The relationship between the European Union and China is simultaneously one of the most strategically important and one of the most challenging we have”, Von der Leyen elaborated with view to EU-China relations. “From the outset I have said China is a negotiating partner, an economic competitor and a systemic rival. We have interests in common on issues such as climate change – and China has shown it is willing to engage through a high-level dialogue. But we expect China to live up to its commitments in the Paris Agreement and lead by example.”

On the situation in Belarus, she underlined that the European Union is on the side of the people of Belarus: “We have all been moved by the immense courage of those peacefully gathering in Independence Square or taking part in the fearless women’s march. The elections that brought them into the street were neither free nor fair. And the brutal response by the government ever since has been shameful. The people of Belarus must be free to decide their own future for themselves.”

The President also pledged that the European Commission will put forward a European Magnitsky act and urged Member States to embrace qualified majority voting on external relations “at least on human rights and sanctions implementation.”

As to Europe’s overall approach in international affairs, President Von der Leyen called for Europe “to be a global advocate for fairness” and she stressed that “if Europe is to play this vital role in the world – it must also create a new vitality internally.”