HR/VP Blog – At Monday’s Foreign Affairs Council, member states agreed to launch a new EU Global Human Rights Sanctions Regime to strengthen our collective action in this field. Taking action on human rights is not only the right thing to do. It is also in our interest: more human rights means more freedom, prosperity and peace, for us all. 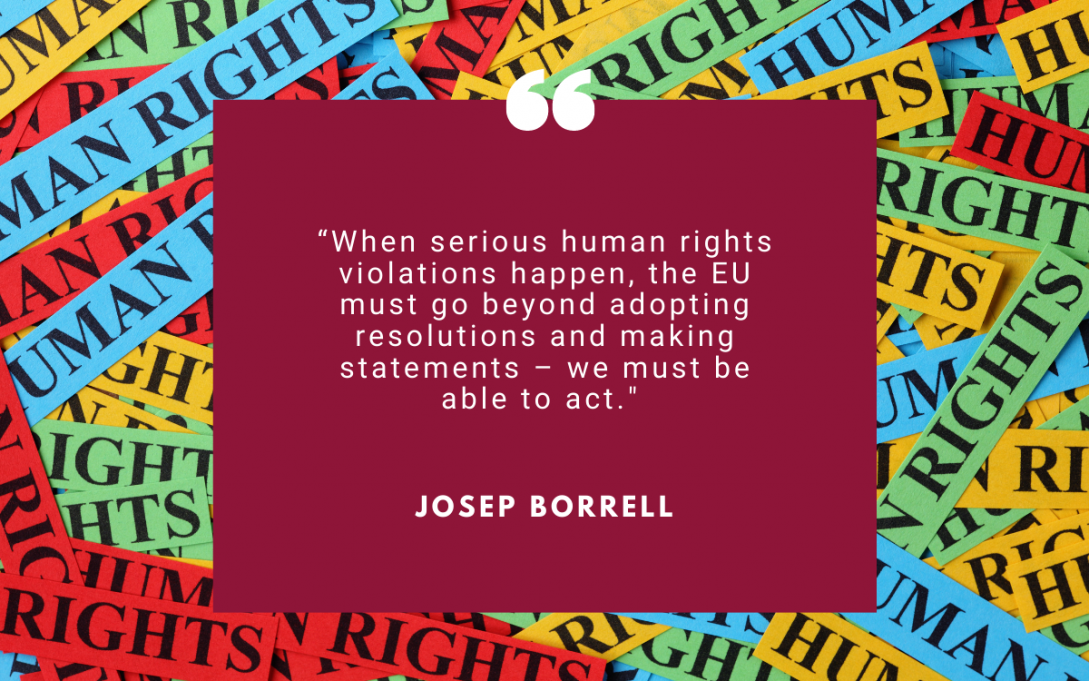 One year ago, during the first Foreign Affairs Council that I chaired, EU Foreign Ministers gave their political agreement to create a new EU instrument to go after the perpetrators of serious human rights violations and abuses worldwide. The road has been quite long and complex, as I have described earlier. But we now have arrived at a good outcome. The new regime enables us to impose sanctions regardless of where human rights violations and abuses occur, without having to create new, country-specific sanctions regimes as we had to do until now. This means we have new tools to increase accountability and fight impunity.

Human rights, we often say, are in the DNA of the European Union. However, how do we defend them in a world where, demonstrably, respect for human rights is in retreat? Every day, in different parts of the world, the EU and its member states are working in concrete ways. On the ground, we are observing trials and elections, supporting human rights defenders and taking them out of danger, working on projects to advance the rights of women and supporting civil society.

But we all know about the hard realities of today’s world. Despite our best efforts, slavery, child soldiers, torture, the killing of civilians, human trafficking and many more crimes are still happening every day. The world is full of examples: in the Democratic Republic of Congo and elsewhere, women are subjected to widespread sexual violence as part of the conflict ravaging the country; in Syria, Afghanistan, Yemen and beyond, families are forced to flee their homes because of conflict; in many countries, courageous women and men languish in prison because they dared express an opinion; and we have all witnessed how in Belarus peaceful protesters are met with violent repression.

When this happens, the EU must go beyond adopting resolutions and making statements – we must act. We already use trade agreements, election observations, crisis management missions, human rights dialogues and guidelines to address these issues on the ground. The EU can also respond to human rights violations by suspending development aid (as we have for Burundi) or withdrawing “everything but arms” trade preferences (temporarily lifted in the case of Cambodia).

And then there are sanctions. The EU has, for years been using this tool to target human rights violations and abuses. We have used visa bans, asset freezes and other measures, such as banning the sale of weapons and equipment used for internal repression, to target the people and entities responsible. We have done so, for example in the cases of Libya, Venezuela, Belarus, DRC and Myanmar.

“We no longer need to agree a specific sanctions framework for every country where we know violations occur, which will save us a lot of time.”

One year ago, we decided that time has come to take another step: to develop a sanctions regime that is truly global in scope. That work has now come to fruition.

The new EU Global Human Rights Sanctions Regime will not be bound by borders, or specific to a country. It will allow us to target state and non-state actors, regardless of where they are and regardless of whether they commit violations and abuses in their own state, in another state or across borders. We no longer need to agree a specific sanctions framework for every country where we know violations occur, which will save us a lot of time.

The new regime will include a dedicated derogation, which allows member states to grant an authorisation to humanitarian operators to ensure the civilian population does not suffer because of the behaviour of their leaders.

The adoption of the EU Global Human Rights Sanctions regime is an important milestone, but this is not the end of our work. We now need to determine how we use it to the greatest effect and which concrete cases should be listed. While both member states and myself as High Representative can make proposals, it is for the member states to decide, by unanimity. It is no secret I had proposed the use of qualified majority voting to enable us to take faster decisions on listings, but not all member states could agree to this.

Any decision on listings will no doubt be a delicate exercise where we need to tread carefully. But one thing is clear: from the outset we will need to demonstrate political will to use this new regime and to have meaningful and legally robust listings.

In a world where some try to repudiate or redefine the universality of human rights, the EU must be more than a moral force. We need to be more assertive and act. As the Irish poet Seamus Heaney wrote, we must “provide a worldwide amplification system for "the still, small voice". To do that, we needed this EU Global Human Rights Sanctions Regime.

In sum, a lot will depend on how exactly we, collectively, will decide to use this new tool. But we have given a signal to the world’s human rights abusers: stronger EU action on human rights is now possible.