HR/VP Blog – Last week, at the European Commission, we adopted a new strategy to strengthen the international role of the euro and increase our resilience to extraterritorial unilateral sanctions. The fields of finance and economics are increasingly used as tools in international competition. We need to enhance EU’s strategic autonomy in these areas. 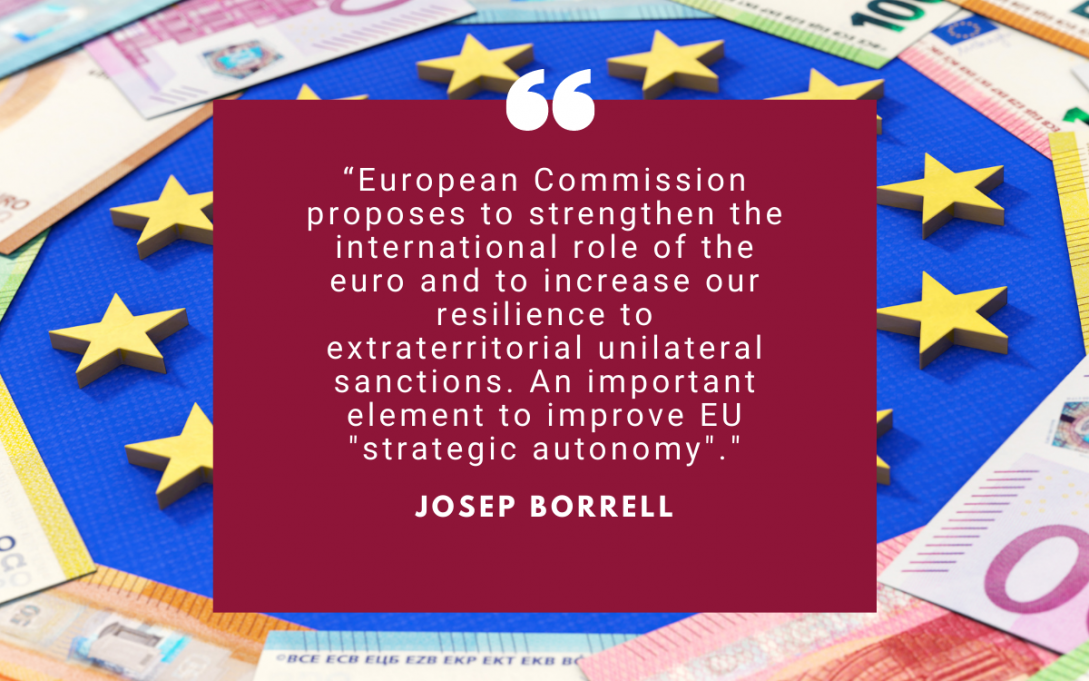 On 19 January, we approved in the College a new strategy, prepared by my colleague European Commission VP in charge of the economy Dombrovskis in close cooperation with the European External Action Service, on what is often referred to as ”economic sovereignty”. This strategy is central for our broader common foreign and security policy.

“We have discussed a lot in recent months about the "strategic autonomy" of the EU. We need to act now on this subject, especially in economic matters.”

In today's increasingly competitive world, not only do the classic tools of power play a role, but soft power itself is increasingly used as a weapon: trade, technology, data, information are now instruments of political competition. We have discussed a lot in recent months about the "strategic autonomy" of the EU. I have already stressed that we need to act now on this subject, especially in economic matters.

To achieve this goal, the EC intend to strengthen the international role of the euro, develop further the EU’s financial infrastructure, increase their resilience to the extraterritorial application of unilateral foreign sanctions and promote the uniform enforcement of EU sanctions.

“We have measured the importance of these issues with the agreement on Iran's nuclear programme: in recent years, we have not been able to protect the legitimate trade relations between European companies and Iran.”

We have measured the importance of this issue in particular with the JCPoA, the agreement on Iran's nuclear programme: it is one of the major achievements of European diplomacy, but its implementation has been called into question by the withdrawal of the United States and the unilateral sanctions decided by the Trump administration. In recent years, we have not been able to protect the legitimate trade relations between European companies and Iran.

Strengthening the international role of the euro

To increase EU's strategic autonomy, an excessive dependence on the dollar is one of our weaknesses. Such a dependence entails economic risks and additional costs for European players, associated with the euro/dollar exchange rate, difficulties for private or public actors to raise money on European financial markets due to a lack of interested investors and important political risks related to potential unilateral decisions by foreign actors.

Therefore, the EU should foster a greater use of the euro in international transactions. Currently the euro is the second most used currency internationally. As the chart below shows, the euro gained rapidly ground as a currency of international use (i.e. used by non-EU residents) in its early years. However, since the 2008/09 recession, the trend had been reversed and the euro lost weight as a global currency.

“Although the US was the epicentre of the global 2008/09 financial crisis, US Treasury securities maintained their primacy as so called “safe-haven assets.”

Although the US was the epicentre of the global 2008/09 financial crisis, US Treasury securities maintained their primacy as so called “safe-haven assets”, financial instruments expected to retain value during economic downturns. From 2010 onwards, the sovereign debt crisis in the eurozone highlighted weaknesses in its architecture and made a dent in its international use. A lot has been done to fix underlying problems after this crisis. However, we need to continue to make improvements, notably by completing the Banking Union and by making progress on the Capital Markets Union. In the last year, the Covid-19 pandemic has again highlighted some vulnerabilities of the European Union, but has also revealed its strengths. The quick and bold reaction of the ECB in terms of easing monetary policy and of the member states on the budgetary side, as well as the new Next Generation EU (NGEU) recovery fund have strengthened confidence in the EU and the euro. These reactions sent a clear signal to the markets and potential international users of our currency: EU leaders have now powerful instruments to protect social and economic stability and are ready to use them.

“The quick and bold reaction to the COVID-19 crisis of the ECB and of the member states, as well as the Next Generation EU (NGEU) recovery fund have strengthened confidence in the euro.”

Also, the euro debt market has a great potential. The success of the financing of the SURE programme has highlighted the high credit quality of the Union and the massive appetite of international investors for euro-denominated safe assets. The EU bonds under the NGEU recovery fund will add significant depth and liquidity to the EU's capital markets and make the euro even more attractive for investors.

In addition, the green transition opens up a big opportunity in that respect. Through in particular the European Investment Bank, the EU has been a pioneer in the green bond market and almost half of global green bond issues have been denominated in euro in 2019. This percentage should be boosted also by the NGEU recovery fund: at least 30% of the investments should be financed by green bonds. The EU is also working on a EU Green Bond Standard to further consolidate this market.

“The green transition opens up a big opportunity for the international use of the euro : almost half of global green bond issues have been denominated in euro in 2019.”

Another way to strengthen the global role of the euro is to promote its use in certain markets. Important progress has been made for instance in the gas market: “For natural gas contracts, we have seen the euro denominated share rise from 38% to 64% between 2010 and 2018”, pointed out my colleague, Commissioner for Energy Simson. In 2022, the Commission will revise the Benchmarks Regulation to facilitate the creation of euro-denominated indices covering key sectors of the economy, including emerging markets such as hydrogen. This should help to boost the use of the euro in financial markets.

The Commission intends to organise outreach activities with public and private market participants, especially outside the EU, to promote investment in euro-denominated bonds and the use of the euro in general. To this end, the European External Action Service and the EU Delegations will have an important role to play.

The need to protect the EU's financial infrastructure from foreign interferences

To enhance its economic sovereignty, the EU also needs to protect from foreign interferences the financial infrastructures based in Europe, such as the SWIFT payment network (based in Belgium), which transmit money transfer instructions, or Euroclear (in Belgium) and Clearstream (based in Luxembourg), the clearing houses which take on counterparty risk between sellers and buyers of securities, guaranteeing that the transactions can be completed. The sanctions decided by the Trump administration following its abandonment of the nuclear treaty with Iran had a major impact on them.

“We must prevent that a third country can force our financial systems to apply its unilaterally adopted sanctions.”

It is essential for the EU to maintain the global reach of these mechanisms, while better safeguarding the EU's strategic autonomy. We must prevent that a third country can force these systems to apply its unilaterally adopted sanctions. To this end, the Commission, together with the ECB and other European supervisory authorities, will identify tools to counteract the effects of such illegal measures.

Our tools are not very efficient at the moment

For instance, with INSTEX (Instrument in Support of Trade Exchanges) our member states have developed since 2019 a European instrument for facilitating legitimate trade payments between the EU and Iran. I dedicated quite a lot of my times last year to work on it, however, its effectiveness has remained limited until now. In order to ensure the uninterrupted flow of essential financial services between the EU and its legitimate trading partners, we will explore ways to improve rapidly INSTEX.

Since 1996, we have also at our disposal the so-called Blocking Statute to counter third country sanctions and other extraterritorial measures against European companies and individuals. We tried also to use it last year, however, we must recognize that this tool has not been very effective until now. We will consider additional policies to address these practices, including a reform of this statute.

“When a foreign company seeks to take control of an EU company, consideration will be given to the fact that this could make the European company subject to extraterritorial sanctions.”

We now have at our disposal the new "screening" mechanism, which assesses the impact of Foreign Direct Investment in the EU on security and public order. When a foreign company seeks to take control of an EU company, consideration will be given to the fact that this could make the European company subject to extraterritorial sanctions. It could therefore jeopardise its ability to maintain critical EU infrastructure or ensure continuity of supply of essential inputs.

Finally, we need also to strengthen our international cooperation on sanctions and extraterritoriality, in particular with the G-7 countries. The start of Joe Biden's Presidency could be an opportunity to open up a new chapter on this file and I intend to put my full weight in this direction.

“We need to strengthen our international cooperation on sanctions and extraterritoriality. The start of Joe Biden's Presidency could be an opportunity to open up a new chapter on this file.”

Renowned economists like Larry Summers, former Secretary of the Treasury in the US administration, or Maurice Obstfeld, former chief economist of the IMF, have recommended stopping exploiting the dominance of the dollar as a tool for sanctioning, except in cases of very broad multilateral consensus. As many economists and observers have pointed out that although in the short term the primacy of the dollar as an international currency is not directly at stake, the abuse of this practice could be an important threat to the US currency’s international role in the long term.

To improve EU’s “strategic autonomy”, the monetary and financial field has become an important area for action. With the euro we have a powerful tool at our disposal to enhance our economic sovereignty if we are able to use it wisely and effectively. It has to become an integral part of our global foreign and security policy.