Time to move forward on EU integration in the Western Balkans

HR/VP Blog - This week, I visited North Macedonia, Albania and Bosnia and Herzegovina. Their leaders were clear in condemning Russia’s invasion of Ukraine and the three countries have joined our sanctions against Russia. We are united in our efforts to stop the war and help the Ukrainian people. I underlined firmly the EU’s commitment to support the Western Balkans even more and to take forward the region’s future in the European Union. 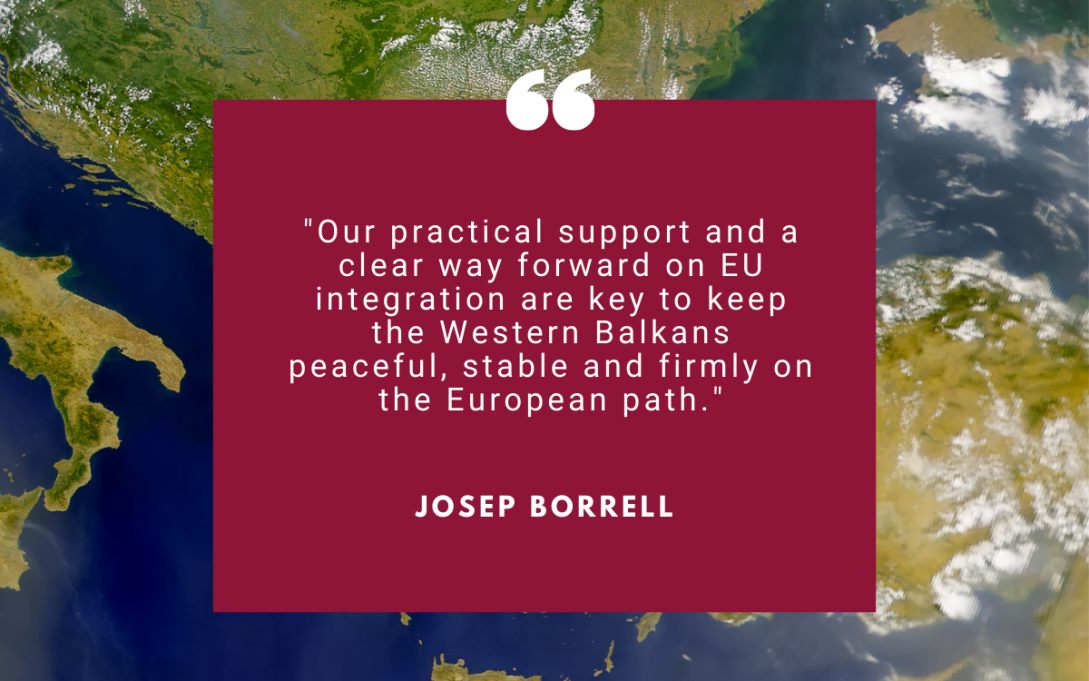 The war in Ukraine brings back vivid memories of the wars around the break-up of the former Yugoslavia in the 1990s and early 2000s. Since then, the European Union has been deeply engaged in the region. We have worked to help heal the wounds of those conflicts, resolve remaining disputes and modernise the societies and economies through the perspective of joining the European Union. The future of the Western Balkans clearly lies within the EU – they are not our backyard but our courtyard.

A worrying resurgence of tensions in the region

But even before the war in Ukraine, there was a worrying resurgence of tensions in the region, particularly within Bosnia and Herzegovina and between Serbia and Kosovo. We have seen outside interference seeking to destabilise our neighbours and weaken the European Union, notably through Russia’s insidious and well-documented disinformation campaigns. The hardships of the COVID-19 pandemic throughout Europe have been exploited but these campaigns have increased further substantially since the start of the war on Ukraine. The fears of rising energy and food prices resulting from the war in Ukraine are also very strong in the Western Balkans, countries that are much poorer than those in the EU. This emerged clearly in my discussions with authorities and civil society alike.

“We recognise the frustration in the region at delays in moving forward on the EU path. Our practical support and a clear way forward on EU integration are key to keep the region firmly on this path.”

We are providing strong support to fight disinformation and strengthen cyber resilience. We are united to stop the unjustified and unprovoked war in Ukraine and are joining forces in applying tough sanctions on Putin’s regime. In Albania, I commended the country for using its two-year seat at the UN Security Council, working closely with the EU in the interest of peace and international justice. We recognise the frustration in the region at delays in moving forward on the EU path. The people in the Western Balkan’s are very firm in their resolve to join the EU. It struck me when a young woman told me, “if the EU does not come to us, we come to the EU”. The high emigration figures are proof: many young people are leaving the region to come to the EU.

Both our practical support and a clear way forward on EU integration are key to keep the region firmly on the EU path. I reiterated to leaders in North Macedonia and Albania that both countries have fulfilled all the requirements to start accession negotiations with the EU. They are also 100% aligned with our foreign policy decisions. I am personally working to ensure that the start of accession negotiations takes place as soon as possible. This must happen now, still under the French presidency of the Council of the EU. I am encouraging North Macedonia and Bulgaria to resolve their remaining bilateral issues as a matter of priority. It is in the clear strategic interest of the EU to move forward.

Our commitment to protect security and stability in BiH and beyond

In Bosnia and Herzegovina (BiH), the political situation has become very worrying in recent months. I met the troops serving in our European military operation in the country, EUFOR Operation Althea. To stress our commitment and resolve to protect security and stability in BiH and beyond, we recently decided to double the number of EU military forces in the country. We are indeed resolute in defending our values against external threats and maintaining stability in our closest neighbourhood.

I underlined to all elected leaders of the country that we want to see BiH advance again on the European path. I made clear in particular that the authorities in Republika Srpska must return to a more constructive stance to allow proper decision-making in all BiH state institutions.  We have worked over the past 9 months to facilitate talks on a comprehensive package of constitutional and electoral reforms. Important progress had been done, and only a final stretch was needed at the time I was in BiH. Talks continued for four days after I left the country but an agreement could not be reached.

“In these times where Europe is facing unparalleled challenges to its security, BiH leaders have a particular responsibility to protect the unity, sovereignty and territorial integrity of their country.”

Political leaders of BiH missed another key opportunity to resolve longstanding issues. Short-term priorities took over from the need for long term compromise in the interest of the people. In these times where Europe is facing unparalleled challenges to its security, BiH leaders have a particular responsibility to overcome disagreements to protect the unity, sovereignty and territorial integrity of their country.

During my visit to these three countries, I had the opportunity to exchange with civil society representatives. In Bosnia and Herzegovina, I met extraordinary women peacebuilders who told me how the current war and instability brings back painful memories and fears. In Albania and North Macedonia I met with journalists, fact-checkers, researchers and academics who are fighting disinformation and information manipulation. Many have also contributed actively to the Conference on the Future of Europe. I received their contributions in Skopje, from a group of young people, who shared practical ideas on democracy, the rule of law, as well as the Green Deal. I told them that the future of Europe is more their future, than it is mine – the EU is the way for the European people to survive. Their engagement helps build their countries’ future as part of the European family: a Union of democracies governed by the rule of law.

“The engagement of the civil society in the Western Balkans helps build their countries’ future as part of the European family: a Union of democracies governed by the rule of law.

Putin’s brutal attack on Ukraine forces all countries to make a choice. A choice between the rule of law and the rule of the gun, between a rules-based order and a world of naked aggression. With the countries I visited, we are united in trying to stop the outrageous war in Ukraine. We need to continue to work closely together to keep the Western Balkans peaceful, stable and firmly on the EU path.