Together for the security, stability and development of the Sahel

The world’s attention is legitimately focused on the global response to the coronavirus crisis. Despite its historic scale and intensity, COVID 19 does not rid us of the many other regional and global challenges we face. Quite the contrary: since it weakens the stability and development efforts of some countries, COVID-19 is an aggravating factor. We must therefore not only maintain our engagement with our partners but strengthen it. 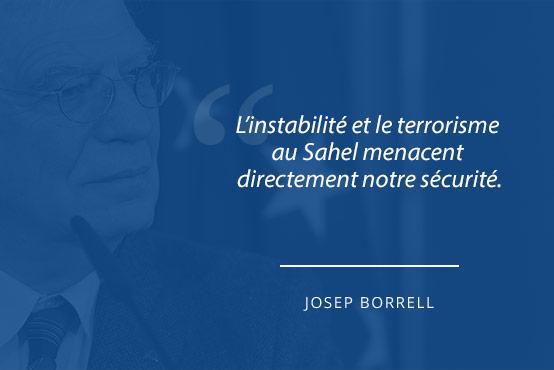 Instability and terrorism in the Sahel directly threaten our security.

The five countries of the G5 Sahel (a group comprising Burkina Faso, Mauritania, Mali, Niger and Chad), which together cover an area equivalent to the size of

Western Europe, are among those most at risk. Threatened by the effects of climate change, food insecurity and weak state structures, these countries – some of the poorest in the world – are facing multiple crises. Terrorism is taking a severe toll in the region, with a growing number of attacks carried out in a climate of persistent indifference. In 2019 alone, they claimed the lives of more than 4 000 people! Almost 800 000 people have been displaced in Burkina Faso, seven times more than in February 2019. Seventeen million people in the Sahel and West Africa are now in need of food aid, double the number last year. Estimates suggest that the combined effect of insecurity and COVID could plunge some 50 million people into a food and nutrition crisis.

The Sahel may seem remote to many European citizens. That is not the case, however: the EU’s southern border extends to the countries of this vast region, which has Morocco, Algeria and Libya as immediate neighbours. Recent history has taught us that terrorism does not respect borders and that instability is a powerful driver for population displacement and all kinds of trafficking. Instability and terrorism in the Sahel thus directly threaten our security. It is therefore our duty of solidarity, and also in our interest, to stand by the people and countries of the Sahel.

Concrete support and launch of the Coalition for the Sahel

Last week’s video conference also gave us the opportunity to formally launch the Coalition for the Sahel. The aim is to extend this Coalition to other international partners, as the Sahel cannot be Europe’s business alone.

We announced additional support of €194 million: €112 million to strengthen the internal security forces of the countries of the region and to help with the redeployment of the presence of the state and justice in the most vulnerable areas, and €82 million for resilience and development programmes. This new contribution is in addition to the €4.5 billion that the European Union has invested in the region since 2014.

Moreover, in order to support the fight against coronavirus and to cover the economic and social consequences of COVID-19, we have decided to adjust our existing programmes by refocusing them on the emergency response to the health crisis, strengthening health, water and sanitation systems in particular. In the Sahel, almost €450 449 million is thus being redirected.

In parallel, we support the request of our African partners for a moratorium on debt servicing to international financial institutions. We are prepared to go further, by reflecting together with these institutions on cancelling or restructuring the debt that drains the budgets of so many of our partners.

On the security side, we support the Joint Force to cover expenditure on equipment, infrastructure, advice and training. In addition, the EU supports the strengthening of the capacity of the G5 Sahel countries in the areas of internal security and justice.

Since 2012, we have also deployed three Common Security and Defence Policy missions. In practical terms, this means that 900 experts are deployed in the region to help strengthen the defence forces, the gendarmerie and the police through various actions: advice, training and support for equipment and infrastructure.

In order to better address the current security situation, we recently strengthened and broadened the mandate of our mission in Mali. The mission will now be able to act outside Mali. On the one hand, the mission will now also be able to accompany the Malian army during its deployments on the ground, without being engaged in combat operations. On the other, it will be able to train other national contingents of the G5 Sahel Joint Force.

All these efforts, unprecedented in their scale, have admittedly not been as successful as hoped. It is time to step up our engagement. Of course, the primary responsibility lies first and foremost with our Sahel partners. But they will not succeed on their own, as they are facing many challenges at the same time. Governments in the Sahel spend up to a third of their budgets on security. These efforts are not sustainable in the long term.

In the Sahel, as elsewhere, we cannot afford to put our efforts into quarantine.