On Tuesday, I was in Ukraine for my first visit as High Representative. The frontline in eastern Ukraine has been calm for almost two months now, the longest period since the war started. Since 2014, the EU has been the strongest partner of Ukraine. Our support will continue but is also linked to the urgent need to enhance the rule of law and develop the fight against corruption. 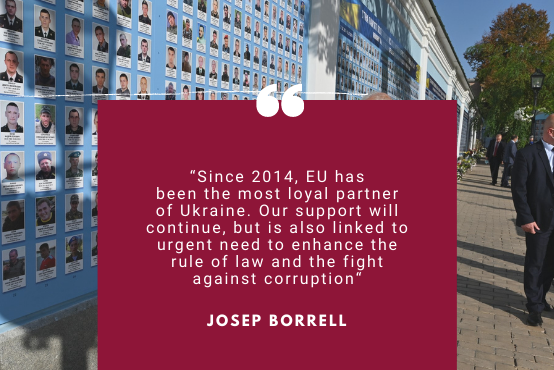 Due to the Covid-19 pandemic, this visit came much later than intended: undoubtedly, Ukraine has been at the top of the EU agenda since the Maidan “Revolution of Dignity” in 2014 and the conflict in the east. I met President Volodymyr Zelenskyy and the Ukrainian Ministers of Defence and of Foreign Affairs. I also met the Head of the Rada anti-corruption committee and representatives of an anti-corruption NGO. Finally, I discussed with the representatives of the Organisation for Security and Cooperation in Europe (OSCE) in the country and visited the European Union Advisory Mission (EUAM) that helps Ukraine modernise law enforcement with over 300 Ukrainian and European staff members.

My visits to the Maidan Memorial and to the Wall of Remembrance gave me a profound sense of what Ukrainians have gone through.

The most touching part of this trip was my visit to the Maidan Memorial dedicated to the “heavenly hundred” who lost their lives, murdered by snipers near Maidan square on February 2014. In the following days, Russia invaded and illegally occupied Crimea. I also paid a visit at the Ministry of Defence memorial and to the Wall of Remembrance, the wall of the monastery where protestors took refuge during the 2013-14 revolution, since converted into a memorial by adding pictures of fallen soldiers. The war in eastern Ukraine has claimed 13 thousand lives and forced 2.4 million people out of their homes. These visits gave me a profound sense of what Ukrainians have gone through.

EU: the strongest and most reliable partner of Ukraine

Since the beginning of this fight, the EU stood by Ukraine, as its strongest and most reliable partner, in terms of economic integration, support for the reform processes, and defence of Ukraine’s sovereignty and territorial integrity. The EU-Ukraine Association Agreement, concluded in 2014, is the most comprehensive one that the EU has with any another third country. Since then, Ukraine has received from the EU €14 billion, an unprecedented level of support. Since 2007, the European Investment Bank has financed 43 projects in Ukraine for € 6.45 billion. And in addition to the already mentioned EUAM, the European Union Border Assistance Mission (EUBAM) works with Ukraine to harmonise border control and customs procedures with those in EU Member States.

Plenty of work to be done together

There is, however, still plenty of work to be done together to fully reap the benefits of that cooperation within the framework of the Association Agreement and the Deep and Comprehensive Free Trade Area. The best way for us to support Ukraine is to help reforming the country. But only the Ukrainians themselves can implement those reforms. A stable, prosperous and democratic Ukraine is the best way to stabilise our neighborhood.

In recent months, the COVID-19 crisis has worsened the socio-economic situation in Ukraine as it has done elsewhere. Ukraine’s GDP dropped by 11.4% in the second quarter of 2020 and in September, the country recorded its highest average COVID-19 cases, surpassing 3000 new daily cases. If the pace of the new infections continues, hospitals could be quickly overwhelmed. To face this crisis, the EU with its Member States are helping Ukraine with more than €190 million through the “Team Europe” initiative.

However, not all of Ukraine’s actual difficulties are related to COVID 19. President Zelenskyy’s election in April 2019 was a sign of the strong willingness of the Ukrainians to fight corruption and to loosen the oligarchs' grip on the country. His first months in office were characterised by a “turbo regime” with the Parliament quickly adopting long-stalled reforms.

However, according to many observers, the pace of reforms has slowed down recently, including on the implementation of the Association Agreement commitments. The government reshuffle in early March and the dismissals of reformist figures sent worrying signals over the readiness to resist vested interests. This being said, President Zelenskyy continues to be a source of hope: citizens still expect him to deliver on reforms and promises of change for which he was elected. And still this May, he demonstrated leadership in pushing ahead with two crucial and difficult reforms, i.e. land reform and a banking resolution law.

The courageous work of anti-corruption NGOs

During my visit, I was also impressed by the courageous work of the NGO Anticorruption Action Center (ANTAC). These brave citizens take personal risks in their fight against corruption. Vitaliy Shabunin, the head of ANTAC, told me about when his house was burnt down last July. Such attacks must be thoroughly investigated. We also regret that there is still no criminal prosecution in the PrivatBank case regarding a fraud of more than $5 billion. And oligarchs still maintain significant influence. For example, they own most national TV channels. Freedom of information is the oxygen of democracy and independent media are crucial in Ukraine’s efforts to secure a resilient information space, and a vibrant civil society.

I insisted in particular on the necessity to ensure transparent, merit-based and de-politicised selection processes for the anti-corruption authorities.

Last July, we signed with Ukraine a Memorandum of Understanding (MoU) on a new macro-financial assistance (MFA) programme for an amount of €1.2 billion. I reminded President Zelenskyy that there were conditions attached to this MoU, above all concerning the enhancement of the rule of law and anti-corruption reforms. I insisted in particular on the necessity to ensure transparent, merit-based and de-politicised selection processes for the anti-corruption authorities.

President Zelenskyy won general praise for his outreach to the people in the east and his moves to help relaunch the implementation of the Minsk Agreements.

Regarding the conflict in eastern Ukraine and relations with Russia, President Zelenskyy’s ambition was to change the dynamics. He won general praise for his outreach to the people in the east, including in the non-government controlled areas, and his moves to help relaunch the implementation of the Minsk Agreements. However, progress remains still limited nine months after the Paris Summit last December.

A new ceasefire has indeed been agreed and is effectively observed since 27 July. This is unprecedented. It failed, however, to create a positive dynamic in the negotiations and the pandemic has worsened the situation on the ground. The de-facto closure of the Line of Contact in eastern Ukraine, makes efforts for reconciliation and possible reintegration more difficult.

I reaffirmed EU support to Ukraine’s sovereignty and territorial integrity – and in particular our continued non-recognition of the illegal annexation of Crimea - and stressed the positive role of Ukraine in displaying flexibility and a forthcoming attitude. Russia needs to reciprocate and remain party to the Minsk Agreements processes.

This short visit to Ukraine made me even more committed to do everything possible during my mandate to ensure that EU support can lead to a significant improvement for the Ukrainian population and for the prospects for peace in the region.