HR/VP Blog - The UN General Assembly high-level week is once again gathering leaders from the whole world in New York. Russia’s illegal war against Ukraine is on top of this week’s agenda – but there are also many other issues to address. With the food, energy, climate and debt crises, multilateral action is more needed than ever. 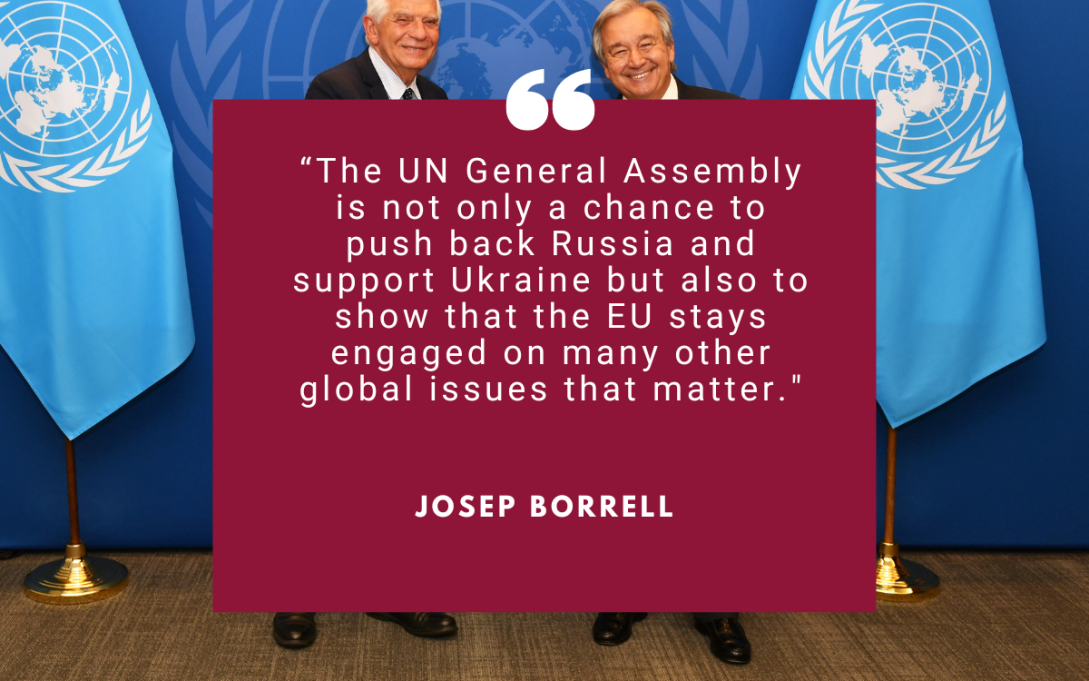 My agenda started on Sunday with a meeting with the UN Secretary General Antonio Guterres. It gave me the opportunity to confirm the EU’s support to multilateralism with the UN at the centre. And yesterday I chaired our usual informal meeting of the EU Foreign ministers ahead of the UN General Assembly.

We intend to use the UN General Assembly to promote international support for Ukraine, not only because it is our neighbour, but because by defending Ukraine, we are defending the core principles of the United Nations.

The Russian war of aggression against Ukraine will of course be on top of our diplomatic priorities during this week. We intend to use the General Assembly to promote international support for Ukraine, not only because it is our neighbour, but because by defending Ukraine, we are defending the core principles of the United Nations: the respect of international law, sovereignty and independence of countries.

I will have also many bilateral meetings in coming days and we want to use them to continue to explain to our partners –in Asia, Africa and Latin America – who is the real culprit of the growing instability and the energy and food crisis: Vladimir Putin. And that for us, it is not a question of choosing between Ukraine and others issues: we also remain committed to addressing other crises in the world.

The Black Sea Grain Deal needs to be extended

Looking at the dire consequences of the war, we have the chance to discuss the Black Sea Grain Deal, concluded this summer thank to the direct mediation of the UN Secretary General and Turkey. The grain deal and our efforts through the EU Solidarity Lanes have already led to a significant decrease in food prices worldwide. The world urgently needs this agreement to be extended. We will continue to push back against the Russian misleading narrative regarding this agreement. Two-thirds of Ukrainian exports have gone to the countries that need them the most: in Africa, the Middle East and Asia.

We are also trying to make progress on the demilitarisation of the Zaporizhzhia nuclear power plant. As International Atomic Energy Agency Director-General Grossi proposed in his report following his visit, Russia must cease its occupation immediately and establish a nuclear safety and security protection zone.

More broadly, Secretary General Antonio Guterres has rightly referred to the current global environment as a “perfect storm” and in our meeting, we discussed how to jointly tackle it. Record temperatures, floods and droughts have struck all continents in recent months as climate change wreaks havoc. The UN Secretary General had just come back from Pakistan where devastating floods have paralysed 40% of the country. Pakistan, like Ukraine, are both important food-exporting countries. Over 300 million people in 82 countries are food insecure. The number of refugees worldwide are on the rise. For people in Yemen and Somalia, starvation is around the corner.

The effects of the pandemic are still lingering in many parts of the world, and even many stable countries are now caught in debt traps due to inflationary pressures.

The effects of the pandemic are still lingering in many parts of the world, and even many stable countries are now caught in debt traps as inflationary pressures puts them in a bind. Colleagues from the Global South are reminding us that the recovery is as uneven as has been the distribution of vaccines. The global human development index has regressed for the second year. Democracy, women empowerment and human rights are all under threat. We are falling behind on the Sustainable Development Goals (SDG) on every continent. Whilst Europe braces itself for a harsh winter, many countries are struggling for survival.

To top it all off, international tensions make it very difficult to find meaningful multilateral solutions to the current challenges. An assertive China and a discredited and destructive Russia are trying to feed distrust against the international rules-based order among parts of the developing world. Tensions between China and the US and between Russia and the rest of us are hampering international cooperation. The Russian veto has predictably disqualified the Security Council from taking any meaningful outcomes on the war against Ukraine, the worst and most flagrant violation of the UN charter since Iraq invaded Kuwait.

The world needs the EU to be globally engaged as a major development partner, as a bulwark for human rights and as a defender of international law and the UN Charter.

So where is the EU in all of this? As the UN Secretary General stresses regularly, the world needs the EU to be globally engaged, to lead by example and to build diplomatic bridges on the triple planetary crisis (of energy, food and debt), on climate finance and on the digital agenda. The world needs an assertive EU as a major development partner, as a bulwark for human rights and as a defender of international law and the UN Charter.

Many of our partners around the world present here in New York send the same message. They understand that the Russian war is a game changer in many ways, but they are concerned that it could distract the EU from the broader global agenda. They ask us to remain engaged also beyond Europe and to be a global, moderate voice of reason and common sense that strengthens international cooperation and the multilateral system.

The high-level week will be a chance not only to push back Russia and support Ukraine, but also to show that we stay engaged on all other global issues that matter to us and our partners. From the Sustainable Development Goals to ensuring ambitious outcomes against climate change at COP 27, transforming education, reshaping the financial system, ensuring improved action in the Sahel, supporting Afghan women: we remain committed on all these files.

With many crises coming at us, we need to muster the political energy to build a stronger, more resilient rules-based global system with the UN at the centre. It is very much in our interest to have it revived. I am well aware that we may not be able to make progress on all these issues in just one week, but we will use the coming days to work in that direction. The European Union wants to seize every opportunity to move multilateral action forward.