Venezuela: the clear urgency of a political and democratic solution

This Wednesday, we discussed in the European Parliament the dramatic situation in Venezuela. The country suffers from a deep political crisis with enormous humanitarian consequences. In recent weeks we have been trying to help create the minimum conditions for free and fair legislative elections. So far, the Maduro government has refused to postpone them. However, I will continue to work for a democratic solution which is the only way out. 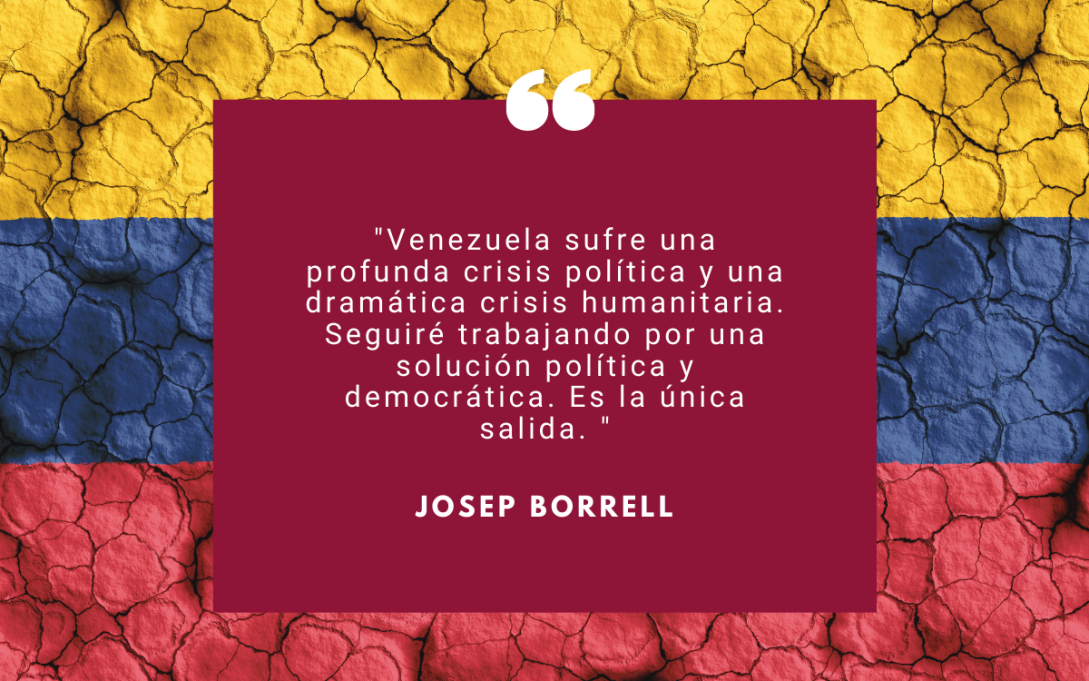 The slow collapse of what once was one the richest countries in the Western hemisphere is one of the great tragedies of our times. The situation is desperate for the Venezuelan people, but the entire region is affected, with appalling numbers of people fleeing the country. Underlying all this are deeply fractured politics and society.

“The situation is desperate for the Venezuelan people, but the entire region is affected, with appalling numbers of people fleeing the country”

Some numbers can illustrate the depths to which Venezuela has sunk. According to European Commission data, 95% of the population does not have regular access to water and 96% of the population lacks continued access to electricity. Fuel shortages have become so intense that long lines of citizens have become a daily picture in Caracas, where police special forces have been deployed at gas stations.

Strict lockdown measures due to the COVID-19 outbreak and lack of fuel have triggered an additional deterioration of the already critical situation in terms of food security. According to Caritas, the attendance of malnourished children to their nutritional centres has decreased by more than 50% in the last months. Around 800 000 children have also dropped out of schools.

The human rights situation is also dramatic, as reflected by the reports of the UN High Commissioner for Human Rights. We have put Venezuelan regime officials on the EU sanctions list precisely for that reason and we continue monitoring the situation on the ground through our work with civil society in the country.

Following these multiple crises, Venezuelan GDP has declined by a quarter since the beginning of 2020 and by about three-quarters since 2013 while inflation is estimated to exceed 500%. This, together with the drop of remittances from Venezuelan migrants of about half, makes a dreadful scenario for the coming months.

“According to a recent poll, 59% of the Venezuelans support peaceful dialogue and negotiations as the way out of the crisis. And that’s exactly what I have been working on.”

In this dramatic context, there is an absolute urgency to find a political solution to the crisis. It is true that we often say for any foreign policy crisis that ‘we need a political solution’. Sometimes this may be a cliché but here it is absolutely the case. This is certainly the opinion of the Venezuelan people. According to a recent poll, 59% of the interviewees support peaceful dialogue and negotiations as the way out of the crisis. And that’s exactly what I have been working on, with all relevant actors, and particularly with EU Member States and with our Latin American partners in the International Contact Group.

The Venezuela mission has been communicated to all Member States

During the debate in the European Parliament, it was striking that a number of MEPs, mainly from the EPP and other right-wing parties, have criticized myself and the EEAS for having taken various initiatives that were precisely aimed at promoting dialogue and negotiations in the search for a democratic solution. Some were accusing me of having sent a secret or semi-clandestine mission, and which had somehow legitimized the Maduro regime.

It’s curious to call a mission secret since it had been communicated to all Member States. And concerning the alleged “legitimation” of the regime, can anyone believe that the participation of the opposition in the Belarus elections was a way to legitimate Lukashenko? On the contrary, it has been a way to expose them as neither free nor fair. In reality, the debate was driven in large part by internal Spanish political dynamics and it generated more heat than light.

Taking a step back of party-political theatre

For these reasons, it is worth taking a step back from the party-political theatre and point-scoring and instead look at what I, as High Representative, have been doing to contribute to the democratic, political solution that everyone knows is needed.

The first step out of the political impasse in Venezuela is indeed to promote a credible framework for the forthcoming legislative elections, actually foreseen by the Maduro regime on December 6. During the Summer, in agreement with the G4, the coalition of the opposition parties led by President Juan Guaido, I relayed to the regime the minimum requirements defined by the opposition for a credible electoral process and their participation. I have been in touch, on several occasions, with the Maduro government and the opposition following up the aforementioned request.

“In the International Contact Group and the Foreign Affairs Council, ministers supported to continue reaching out to the Maduro government to improve electoral conditions”

I have explained these efforts in the International Contact Group ministerial meeting that took place on 17 September and the Foreign Affairs Council, of 21 September. In both meetings, Ministers supported our work and to continue reaching out to the Maduro government to improve electoral conditions and for that, the postponement of the elections. This also was a logistic requirement in case that we decided to send an Electoral Observation Mission because at least five months are needed for its preparation.

It is in this context that two EEAS officials travelled to Caracas to discuss the situation in the country with all relevant parties; reiterate the EU´s position that the electoral conditions which are now in place do not allow for fair, democratic, competitive elections on 6 December; and state that the organising the requested Election Observation Mission of the EU is not realistic with this calendar, since at least five months are needed to prepare it.

A mission, standard to diplomatic practice

This kind of mission is a standard diplomatic practice. In 2019, there were three missions of the International Contact Group in various formats, all of them led by an EU senior official. The Norwegian government has also sent several missions to try to unblock the stalemate, the last one during this summer.

The EEAS officials met in five days with over 70 persons. Firstly, with the President of the National Assembly Juan Guaidó. The representatives of the G4 recalled the five conditions for democratic and transparent elections that they handed to me some months ago and asked  to keep seeking their acceptance by the regime. EEAS envoys also met Henrique Capriles, former presidential candidate of the opposition, who urged the EU to ask for a postponement of the elections, maintaining all channels of communication open and use this opportunity to avoid that Venezuela falls deeper into political and social chaos.

The EEAS envoys met also two representatives of the Maduro regime. Responding to their invitation to the EU to observe the December elections, the EEAS officials made it crystal clear that if Venezuela did not decide to postpone the elections and used the additional time to meet the necessary democratic standards, an EU Election Observation Mission will be absolutely impossible. The EEAS officials were not there to negotiate; they did not offer anything; they just transmitted this important message.

In addition, the EEAS envoys had meetings with the Venezuelan Episcopal Conference, which plays a key role in assisting the Venezuelan people in the current humanitarian crisis. The Episcopal Conference representatives stressed that if the political parties miss the opportunity to run in these elections, the regime will take up all the political space and absolute control of all institutions. Finally, the mission representatives met with interlocutors from civil society, academia and the private sector.

“The clear message from most our interlocutors is that the EU is the only player that can talk to all sides with credibility. Isn’t this the aim of those who support a geopolitical EU?”

To sum up, in Caracas there was widespread support for the efforts of the EU to create space for dialogue. The clear message that came out from most interlocutors is that the EU is the only player that can talk to all sides and can do so with credibility. Isn’t this the aim of those of us who support a geopolitical EU?

There was virtual unanimity that there can be no unilateral solution to the situation in Venezuela and that the only way forward is through incremental progress and dialogue, rather than expecting a single cathartic event. The predominant view was that, even if a postponement of the elections would not, in itself, be the solution to the Venezuela problem, it would certainly be the only way to keep the door open for one.

“There can be no unilateral solution to the situation in Venezuela. The only way forward is through incremental progress and dialogue, rather than expecting a single cathartic event.”

Unfortunately, the recent statement of the Maduro´s regime, refusing to postpone the elections on the stated ground of constitutional requirements, will only serve to deepen the political divisions of Venezuela. This is clearly not the path we want. As EU, we will continue to support all efforts for a political, peaceful and democratic way out of the crisis that the people of Venezuela so badly want, need and deserve.

The critique of our attempt to mediate is an example of unreflective political point-scoring. International life sometimes requires speaking loudly and carrying a big stick. However, diplomacy is mostly about speaking discreetly, and articulating a long-term strategy. It is also, as we do in many other cases, about speaking to those with whom we disagree, precisely to try to get them to reach an agreement.

“International life sometimes requires speaking loudly and carrying a big stick. However, diplomacy is mostly about speaking discreetly and articulating a long-term strategy.”

However, the failure to reach such an agreement between the Maduro regime and the opposition is very bad news for the Venezuelan people. They deserve every effort we can make to create space for dialogue that leads to a sustainable and democratic solution to the multiple crises - political, humanitarian and economic - affecting their country.