We need to fight Islamist terrorism together

HR/VP Blog - There is never any justification for callous killings such as those that have taken place recently in France and Austria. The EU stands united and we appeal to all our partners in the world to work closely with us to fight terror, hate speech and disinformation. 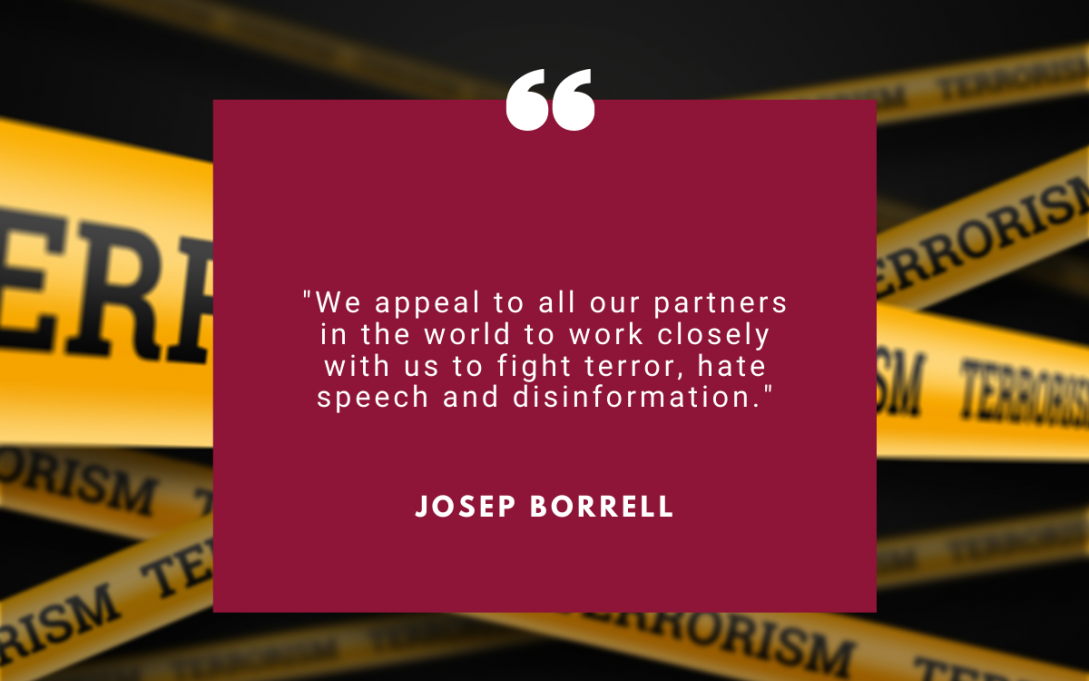 Last Thursday, the Members of the European Council  expressed their solidarity with France and condemned the hideous terrorist attacks that the French people have suffered. Today, European Council members would have done the same with Austria and the Austrian people after yesterday’s attack in Vienna. European leaders also called on leaders around the world to work towards dialogue and understanding among communities and religions rather than division. All world leaders need to join forces in clearly condemning all violence in the name of any religion. We need a sense of shared responsibility to combat hate and terror.

The EU will fight this threat with unity and determination

The recent terror attacks targeted the foundations of our secular and democratic societies. The wave of terrorism we face today is far from the first time that terrorists have sought to tear our societies apart. As we have done in the past, we will continue to fight this threat, defending our core values, with unity and determination. Murder can never be justified, no matter how seriously one might feel offended or disagree with somebody else’s views. Free speech is a cornerstone of the EU’s values and, I dare to say, a key contribution towards a better world. We must protect and uphold it, while of course also rejecting hate speech.

We have to identify precisely the kind of terrorism we are facing. We usually call it Islamist terrorism because the perpetrators and supporters claim to carry out these acts of terror in the name of Islam. But we must avoid to identify this terrorism with Islam. It would be as incorrect as to identify the terrorism of E.T.A, fortunately defeated in Spain, with the whole Basque people as “Basque terrorism”. Quite on the contrary, this terrorism only refers to the extremism of few people, seeking false justifications for their folly in one of the great religions of the world.

“The EU respects all religions. It protects the freedom of everybody to believe and practice religion, or choose not to, and it will continue to do so.”

In the past, Europe has suffered enormously from different forms of violent extremism and we have lived through wars of religion for centuries. Today, the EU respects all religions. It protects the freedom of everybody to believe and practice religion, or choose not to, and it will continue to do so. We, as most in the Muslim world, categorically refuse to be drawn into a logic of a “clash of civilisations” between Islam and “the West”. This would precisely take us back to dark times, instead of building on lessons from the past and overcoming very dangerous divisions.

We live in a world in which identity politics is often creating antagonisms between groups and communities, including inside the Islamic world itself. We have also seen that social networks play an important role in increasing such tensions. The terrorist wave we are currently facing in Europe is obviously strongly linked to the spread of disinformation and hate speech on the Internet. This, in fact, led to the assassination of the French teacher Samuel Paty.

“We must find ways to address the fact that the Internet can be a powerful tool for radicalisation and recruitment purposes, while at the same time respecting its openness.”

The recent attacks do not seem to be the work of highly organised terrorist networks, as was the case in the past. The international fight against Al Qaeda or Da'esh has certainly made important progress. The current terrorist wave is more the acts of individuals, who become radicalised in social networks. That is why we must find ways to address the fact that the Internet can be a powerful tool for radicalisation and recruitment purposes, while at the same time respecting its openness. We also have to fight against those that manipulate from outside, especially in social networks, aiming to mislead or polarise our societies. We know how difficult it is when you are engaged in fighting disinformation.

Recently a great deal of false information and hate speech has also been disseminated around the globe about the situation of Muslims in Europe. In some countries, we have seen manipulative social media campaigns in particular against France and its leaders, calling for a boycott of French products. Some political leaders, for example in Turkey, have supported this. Some political groups have even called for, or expressed their understanding of, violence and the killing of French citizens, for example in Malaysia.

“The clash is not between Islam and other beliefs. It is a clash between civilisation and barbarism, between the respect for life and nihilistic terrorism.”

This is unacceptable. It will only fuel further violence and hate – in Europe and globally. Let us be very clear: the clash is not between Islam, a faith shared by millions of European citizens, and other beliefs. It is not a “clash of civilisations”, but a clash between civilisation and barbarism, between the respect for life and nihilistic terrorism.

We have to make a pedagogical effort to explain the terms of our social model and the place of the religion in it. However, to meet this deadly challenge we cannot succeed alone. We need to work hand in hand with our partners around the globe of all faiths and none.

Working with our partners worldwide

We are already working with our partners worldwide to fight against these terror networks and their supporters, but we surely need to intensify this cooperation against hate speech and online manipulation that nurture terror.

We need all leaders to take a strong stance. Everywhere. In that respect, I thank governments, political and religious leaders, particularly in Islamic societies, who have spoken out in condemning these murderous terrorist attacks and supporting peaceful coexistence.