HR/VP Blog – For more than two months, conflict has been raging in the Tigray region in Ethiopia. The situation is desperate for the local population and the conflict is unsettling dynamics both within Ethiopia and the whole region. I have passed a clear message to the Ethiopian leadership: we are ready to help, but unless there is access for humanitarian aid operators, the EU cannot disburse the planned budget support to the Ethiopian government. 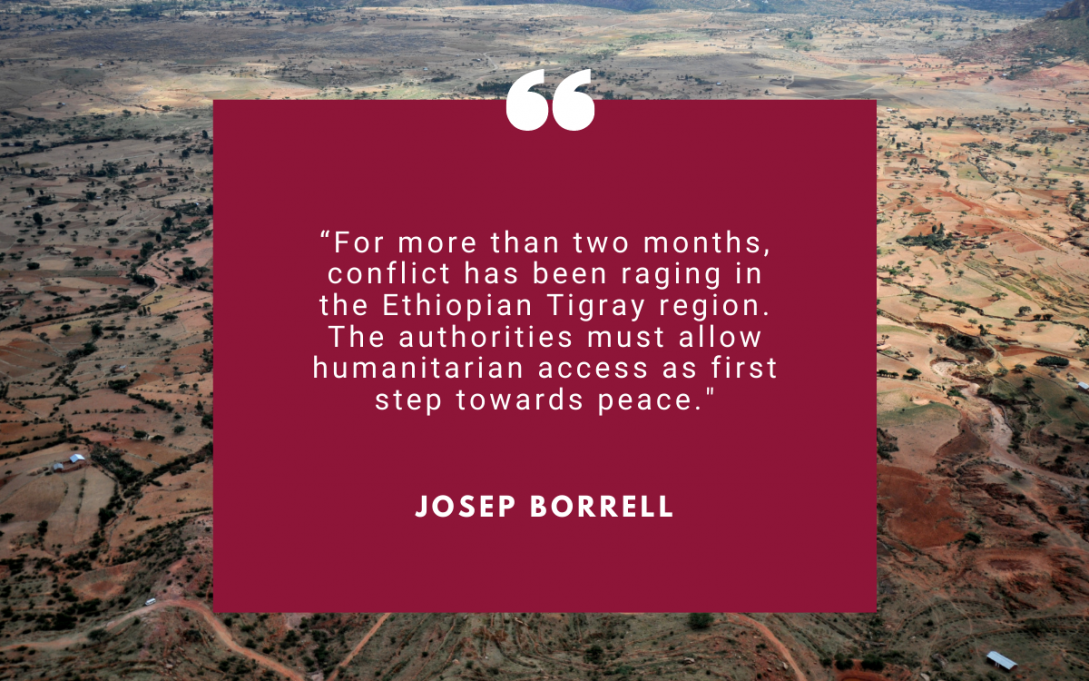 Without deliberate efforts of de-escalation, conflicts tend to worsen, as Ethiopia’s bloody conflict in the northern Tigray region is reminding us. What started two months ago as an internal matter between an autonomous region and the federal government has become a fight affecting the whole region.

“While people are in dire need of aid, access to the affected region remains extremely limited, which makes it very difficult to deliver humanitarian assistance.”

The situation on the ground goes well beyond a purely internal ‘law and order’ operation. We receive consistent reports of ethnic-targeted violence, killings, massive looting, rapes, forceful returns of refugees and possible war crimes. More than 2 million people have been internally displaced. And while people are in dire need of aid, access to the affected region remains  limited, which makes it very difficult to deliver humanitarian assistance.

Moreover, there are regional spill-over effects of the conflict, with for instance Eritrean troops being involved in the military operations in Tigray and with Ethiopian troops being withdrawn from Somalia.55.000 refugees have fled to Sudan and tensions grow dangerously at the border between Sudan and Ethiopia. By affecting or involving other countries, the conflict is also a direct threat to the stability of the whole region.

Just over a year ago, in October 2019, Ethiopian Prime Minister Abiy Ahmed Ali was awarded the Nobel Peace Prize. It was a recognition for his firm efforts to achieve peace, in particular with neighbouring Eritrea, and for promoting peace and reconciliation in the country and in the East and Northeast African regions. Today the world needs Ethiopia’s Prime Minister and his government to live up to this prestigious recognition - by doing all it takes to end the conflict. As an immediate first step, the Ethiopian authorities must comply fully with international humanitarian law and ensure that people in need get access to life-saving aid. This applies to all states in conflict.

When I spoke to the Ethiopian Deputy Prime Minister and Foreign Minister Demeke Mekonnen last week, I underlined that the European Union has been and will remain a reliable partner of Ethiopia. We strongly support the democratic and economic reform agenda of the authorities. Just in terms of bilateral development cooperation, we have provided € 815 million over the last 7 years (2014-2020). On top of this, Ethiopia is benefitting from € 409 million worth of projects under the EU Trust Fund for Africa, focused mainly on support to refugees and host populations.

“I stressed that in the absence of full humanitarian access to all areas of the conflict, we have no alternative but to postpone the planned disbursement of €88 million in budget support.”

To help Ethiopia face the COVID-19 pandemic, the EU mobilised € 487 million to support the government’s Health Preparedness and Response Plan. And several budget support operations were fast-tracked to enable the country to face the economic strains of the pandemic. However, I also stressed that, under the current circumstances, in particular in the absence of full humanitarian access to all areas of the conflict, we have no alternative but to postpone the planned disbursement of €88 million in budget support.

It is in the best interest of Ethiopia and the wider region to allow humanitarian access and to resume the path towards an inclusive and sustainable peace. Regional experiences are relevant here: Sudan stared into the abyss of civil war two years ago, before the parties to its political dispute stepped back and chose a peaceful transition instead. Ethiopia was the midwife to that transition, together with the African Union and the United Nations. Maybe Khartoum can now return the important effort. But this requires that there first be a de-escalation of tensions between the two countries.

I hope we will be able to work out swiftly a favourable outcome with the authorities and we are ready to meet government representatives in Addis Ababa very soon. As EU, we will continue to do our part, in cooperation with the African Union. As we often say, we support ‘African solutions to African problems’. It is urgent, now, to find these solutions.