We need straight-talk and determined action on democracy

HR/VP Blog – With a ‘democratic recession’ underway and new threats to democracy emerging, we need to step up the defence of democracy, both at home and abroad. In particular, we should deepen our cooperation with fellow democracies to counter the rise of authoritarianism. 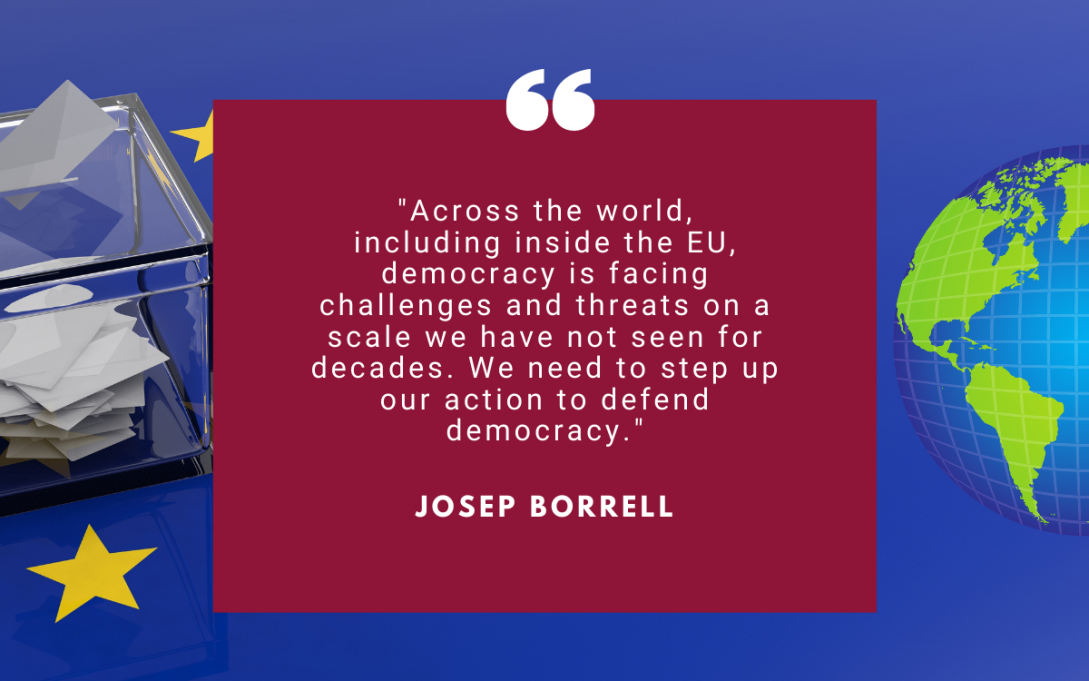 I enjoyed Michael Meyer-Resende’s recent opinion piece, notably because of his plea to the EU to step up our role supporting democracy worldwide. He also sets me a challenge: “The EU's foreign affairs chief Josep Borrell has used refreshingly clear language to explain European foreign policies. He should now give us straight-talk on democracy.” I hope he will consider what follows as some straight-talking.

Across the world, democracy is facing challenges and threats on a scale we have not seen for decades. According to the V-Dem Institute’s Democracy Report 2020, this is the first year since 2001 that the majority of the world’s countries are autocracies: 92 countries, home to 54% of the global population. In addition, challenges to democracy are present in a number of the relatively prosperous and stable countries that could lay some claim to having re-invented Athenian democracy for the modern world. When a US President refuses to concede an election and armed demonstrators supporting him have roamed the streets with his tacit blessing, we cannot ignore the alarm bells.

Within Europe too, anti-democratic political forces have gained a level of support that used to be unthinkable.

Within Europe too, anti-democratic political forces have gained a level of support that used to be unthinkable. EU Member States are today arguing about the meaning and scope of the application the rule of law. There is a formal procedure underway for breaches of the rule of law in two member states and the launch of the EU recovery package is blocked precisely because objections to the proposed rule of law safeguards.

We need to act on these challenges urgently. Not only because democracy is a foundational principle of the Union and because democracy is embedded in the norms and standards of the rules-based multilateral order that we cherish. But also because, fundamentally, it is in our strategic interest to do so. The greater the number and strength of democracies in the world, the more allies we will find to strengthen the rules-based and accountable multilateral system that we foster.

In the competition of great powers, Europe’s support for democracy is an important source of our power of attraction. Global polling clearly demonstrates that majorities throughout the world, also in authoritarian countries, support democracy. Democracy is associated with reduced inequality and, consequently, reduced levels of grievance and conflict. It can act both to prevent the emergence of war and conflict and help to reduce the push factors for irregular migration. A system of checks and balances and a solid legal framework attracts external investors and thus future growth by reducing fears over abuses of power or the arbitrary application of the law.

Overall, the EU has done a lot to support democracy globally, both through programmes and projects. But also in our immediate neighbourhood, through the accession process and the Copenhagen criteria that are a precondition for starting accession negotiations. The EU offers its closest partners a privileged relationship, under the condition that it builds on a mutual commitment to democracy, human rights, the rule of law and good governance. And we assist our partners in adhering to these principles, including through financial and technical assistance to support institutional reforms, civil society organisations and people-to-people contacts.

Following the “Heisenberg principle”, we know that the mere act of observing reality alters it. So the fact that the EU has been present has helped to ensure elections were fair; or exposed the shortcomings, if they weren’t.

Since 1995, we link our trade policy to respect for human rights. This includes the trade incentives we offer to developing countries committing to respect fundamental human rights standards - through the GSP and GSP+ instruments -, but also the “human rights clauses” we include in bilateral and regional trade agreements.

For years now, we have been active, in partnership with the European Parliament, with electoral observation missions. Following the “Heisenberg principle”, we know that the mere act of observing reality alters it. So the fact that the EU has been present has helped to ensure elections were fair; or exposed the shortcomings if they weren’t.

This year we have demonstrated in several critical cases that we take action when elections are stolen or democratic rights are taken away. In Belarus, we are supporting the democratic opposition and have sanctioned those responsible for the fraudulent elections and the subsequent repression, and we are now working on a third round of sanctions. In Hong Kong, we have condemned the imposition of the new security law and proposed a package of measures related to visas, expanding scholarships and restrictions on the export of specific sensitive equipment and technologies, to prevent these from being used for cyber-surveillance and repression. In Venezuela, we have worked hard to find a democratic and political solution to the crisis, and extended the sanctions applied to 36 listed individuals responsible for human rights violations and/or for undermining democracy and the rule of law.

We have also just adopted a new Action Plan on Human Rights and Democracy for the next four years, which will have a greater emphasis on actions to support democracy than previous ones, and our programmes under the new financial framework in this area, will also have a greater focus on democracy support. The new EU human right sanctions regime, when adopted, will also give us more leverage to support democracy worldwide.

There is a lot of potential for the EU to team up more systematically with democratic allies in Asia, Africa, the Americas… to forge joint responses to the rise in authoritarianism worldwide.

Of course, one can easily point out that in all aforementioned cases the EU has not (yet) succeeded in its goals. This is a reason to be modest in our rhetoric and mindful just how difficult the problems are. But surely it is not a reason to give up. It underlines the need to re-double our efforts and work even more together with like-minded, democratic partners. There is a lot of potential for the EU to team up more systematically with democratic allies in Asia, Africa, the Americas and elsewhere to forge joint responses to the rise in authoritarianism worldwide.

More specifically, I see two ‘horizontal’ challenges to democracy, which we need to tackle head-on. The first is that of online interference in democratic processes, whether it is by foreign powers or by politicians working with dubious digital consultancies. These new ways of doing politics have been operating all over the democratic world, and, importantly, outside the framework of norms, laws and practices that democracy is based on.

Because corporate community standards of social media platforms are not sufficient to protect democracy, the Commission is addressing different aspects of this within the EU: the European Democracy Action Plan and the proposal for a Digital Services Act that we will adopt in December will mark a step-change in this work.

However, the nature of the online challenge to democracy is that the Internet does not recognise borders. That’s why we will be investing similar efforts in cooperating with democratic partners, governments and civil society, across the world, to strengthen our collective ability to ensure that what is illegal offline can also be prevented from happening online. This includes hate speech and incitement to violence, the systematic violations of privacy rights and data protection in micro-targeted campaigning, or the undermining of financing ceilings for political advertising and electoral campaign expenditure.

We need to work with like-minded supporters of democracy wherever they are, inside and outside of our Union.

The second horizontal challenge is the one I referred to earlier: threats to democracy inside the EU. Just as the US can no longer refer to the shining city on the hill, we can no longer act as though we have the secret recipe for a resilient democracy and as though the rest of the world should just follow our example.

This means that we need to work with like-minded supporters of democracy wherever they are, inside and outside of our Union, with governments and with civil society organisations. In this context, I believe, like Michael Meyer, that we should positively engage with President-elect Joe Biden’s proposal to host a global Summit for Democracy.

It would be a sign of strategic autonomy, not strategic complacency, to do so.