What’s next for European defence?

HR/VP Blog – It was fitting that we discussed with EU Defence Ministers concrete ways for the EU to do more, more efficiently and faster when a crisis strikes, only a week after my visit to the Sahel, where the EU is heavily engaged to respond to one of today’s most important security and governance crises. 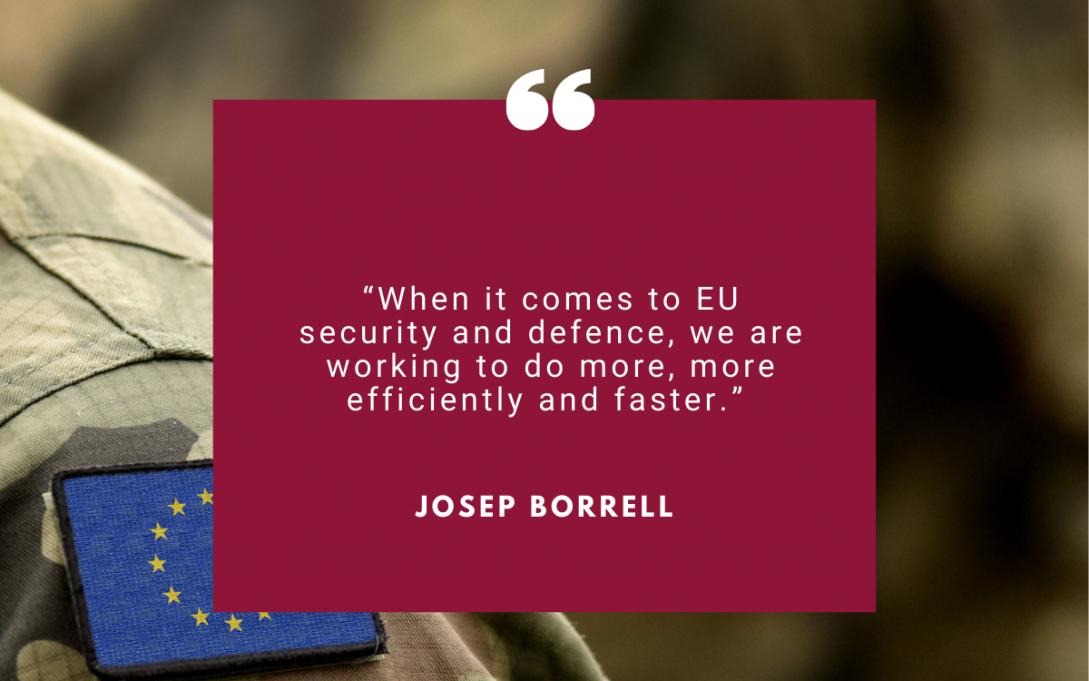 On 6 May, EU Defence Ministers discussed the next steps to strengthen the EU’s role as an all-round security actor. I have previously written on this blog about EU operations and missions, the various defence initiatives, including the Strategic Compass, to guide our future actions and strengthen our capabilities and impact, as well as on our partnerships with NATO, the UN and others (links here and here). Yesterday, I put on the table of the ministers a number of very concrete proposals to make EU’s operational engagement more effective, also drawing on ideas put forward by member states themselves. These are along three main lines of actions:

"We need to make sure that our CSDP missions and operations have the staff and the means they need to achieve their objectives."

In the end, this is also about burden sharing. This is why I insisted on the importance of developing measurable ways and objectives that could stimulate this burden-sharing. Obviously, this is a sensitive topic and discussions will have to continue, but I am convinced that we need more solidarity among member states in many EU policy areas but also for our CSDP missions and operations. After all, these missions and operations do not only help to build peace and stability abroad, they also enhance the security of the EU and its citizens. If Europeans benefit, it is reasonable that all contribute their fair share.

Second, we need more flexibility. A good example is the work we do on so-called ‘Coordinated Maritime Presences’, where EU member states exchange information gathered by national naval assets. Our current pilot project in the Gulf of Guinea could be expanded, and the same concept could be used in the Indo-Pacific for example.

We often see military operations taking place in ad-hoc formats, outside multinational frameworks, for example the Task Force Takuba in the Sahel or Operation Agenor in the Strait of Hormuz. In the short term, we could enhance coordination and cooperation between our CSDP missions and operations, and such European ad-hoc coalitions. Both would benefit from sharing logistic and medical support, undertaking common exercises and sharing information. More generally, we should learn from those successful endeavours and make it possible for smaller groups of member states to conduct missions and operations under an EU umbrella.

Third, we need to be ready to deploy our missions and operations more rapidly to different parts of the world. This requires trained and equipped staff to be available when necessary, and to have more solid planning capabilities and command and control structures at the EU level.

"We also discussed the idea of an EU ‘initial-entry force’ that could be quickly deployed in the initial phase of a crisis."

Together with Defence Ministers, we discussed how the work on the Strategic Compass could provide guidance for the kind of crises that the military need to prepare for. For example, to prevent a hostile take-over of a legitimate government or react when the safety of maritime shipping lanes is put in danger. We also discussed the idea of an EU ‘initial-entry force’ that could be quickly deployed in the initial phase of a crisis. Such a force would consist of approximately 5,000 military (land forces combined with air and maritime components as necessary. The EU Battlegroup, a rotating 2,500 strong force on stand-by for the EU every six months, could be the nucleus of such a force.

These are not abstract concepts but very concrete proposals that can have an impact on the ground at times of crisis. At this stage, these are of course only ideas and I do not underestimate the difficulties to put them in practice. But I believe this is the time to put all ideas on the table and discuss them. If we want to make a difference and raise the level of ambition of the EU as security provider, we should not be afraid of discussing these ideas. Eventually, it will be of course for member states to decide where to set the bar of our ambition.

These work strands are closely interrelated also with other dimensions of the Compass – capabilities, resilience and partnerships – which Ministers will discuss in details in the coming weeks.

And as we pursue those forward-looking discussions, we are making important progress on other fronts too:

I briefed Defence Ministers about our follow-up to Mozambique’s request for EU assistance, to help address the security crisis and the terrorist threat in Cabo Delgado. Work is ongoing on a possible EU Training Mission, which I hope will be launched as soon as possible.

Ministers also adopted three Council Decisions that will allow the United States, Canada and Norway – three key EU partners and NATO allies – to participate in the PESCO project on Military Mobility, bringing valuable expertise and best practices on military movements to the project. It is the first time that the Council decides on the participation of third states in a PESCO project, after having set out the general conditions and related procedures last November. This participation will contribute to strengthening EU-NATO cooperation in the area of military mobility.

In an informal session, we discussed our cooperation with NATO, in the presence of its Secretary General. We focused on the theatres of common interest, such as the Western Balkans, Iraq or the Central Mediterranean. We also exchanged about the situation in Afghanistan and agreed we will continue to coordinate on these matters.

"Ministers discussed the future of the SatCen and its level of ambition, at a time when the importance of geospatial imagery in our security and defence policy is growing fast."

Last, but not least, today I also chaired the EU’s Satellite Centre (SatCen) Board meeting, the first-ever at ministerial level in almost 30 years since the Centre was created. The aim was for Ministers to discuss the future of the SatCen and its level of ambition, at a time when the importance of geospatial imagery in our security and defence policy is growing fast.

If anything, the pandemic has shown the growing value of geospatial intelligence. When many sectors were facing mobility restrictions and a significant amount of ground-based operations were halted, satellites remained in orbit, providing critical intelligence, for example to the monitoring of the UN arms embargo on Libya, and helping to counter crude oil smuggling and the trafficking of migrants.

Today’s discussions reinforced my conviction that we are making good progress in strengthening the EU’s capacity to address the full range of security challenges it faces. But also that we need to do more. The Strategic Compass offers the opportunity to define what we want to be able to do as security and defence actor in 5-10 years from now. We need be realistic and concrete, but at the same time, we should not be afraid to be ambitious. The reality is that we must prepare ourselves for a world where new threats are emerging, threats that we can only address together.