What next for EU security and defence?

HR/VP Blog - Russia’s war against Ukraine is radically changing the geopolitical landscape and endangering our security. In this new environment, the EU’s security and defence agenda has never been as relevant as today. We need member states to fulfil all their responsibilities within both the EU and NATO. 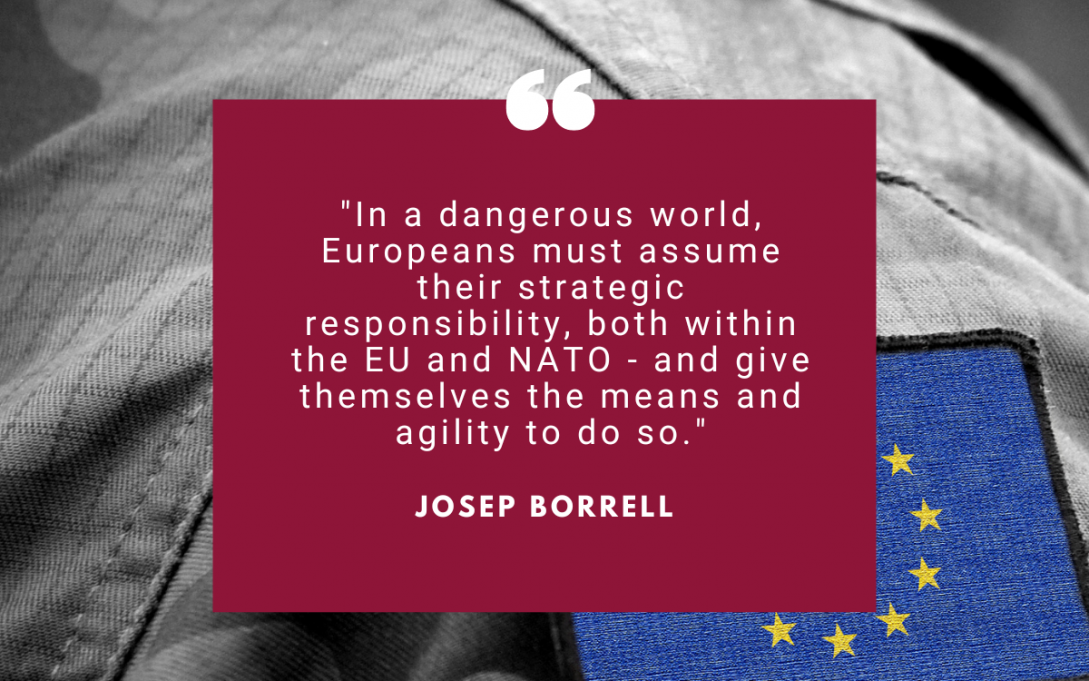 The debate on European security and the EU’s role as well as that of our strategic partners is in full swing. The recent NATO summit in Madrid was a success for the Transatlantic alliance, both in terms of the strategic unity it displayed and the concrete decisions it took. The summit put renewed emphasis on NATO’s collective defence task including plans to strengthen its presence on the eastern flank and enhance the overall number of high readiness forces. All leaders re-stated their commitment to help Ukraine defend itself against Russia’s aggression until it can recover its sovereignty in full. Leaders also agreed to proceed with the NATO accession of Finland and Sweden, which further strengthens the sense of transatlantic unity at a critical time.

The task now is to take our strategic partnership with NATO to the next level and show how we as EU can take greater responsibility for our own security.

All this is unreservedly good news for European citizens and the EU. The EU’s Strategic Compass agreed in March and the NATO 2022 Strategic Concept adopted at the Madrid Summit demonstrate that our respective assessments of the strategic environment are fully convergent, and US President Joe Biden has personally welcomed the EU’s Strategic Compass and the ambitious agenda it contains. The task now is to take our strategic partnership with NATO to the next level and show how we as EU can take greater responsibility for our own security. In fact, these tasks are two sides of the same coin and going forward I see three main elements:

1. We need more deployable and inter-operable forces, ready to address the full spectrum of threats and risks. This means Europeans should spend more on defence and above all spend better, i.e. together. The fact that EU member states have said they will increase defence spending, by a total of around €200 billion, is most welcome. However, unless the proportion that is spent on joint development and procurement increases, the risk is that a lot of that extra investment will go to waste. The defence investment gap analysis presented to EU Leaders last May shows the nature of the problem, but also what can be done, for example with the Commission and the European Defence Agency supporting member states to proceed with joint procurement. One urgent example is the replenishing of stockpiles depleted due to the delivery of military equipment to Ukraine. Jointly acquiring capabilities not only serves the EU’s security and defence agenda, they are also necessary for NATO Allies to protect Europe against threats from Russia.

As important as procuring the necessary capabilities is the need to demonstrate our willingness to use them.

2. Second, as important as procuring the necessary capabilities is the need to demonstrate our willingness to use them and act as a security provider. In the past 20 years, the EU has developed extensive experience with its crisis management operations. What started in the Balkans has grown into a powerful instrument, through which the EU today has deployed 18 missions and operations, of which 11 civilian and 7 military, on three continent.

Some of these missions have been real success stories. Take, for example, operation Atalanta, acting off-shore and its flanking mission EUCAP Somalia acting on-shore. Somalia still has massive internal security problems but thanks to our efforts, piracy is no longer a major problem for international shipping in the Horn of Africa. Beyond piracy, Atalanta has also conducted successful anti-drugs operations, seizing up to 12 tons of narcotic drugs a few months ago, with an estimated economic impact of more than €200 million diverted from feeding criminal and terrorist networks, which destabilise region.

Another example is operation EUFOR Althea, which has made an important contribution to maintaining stability in Bosnia and Herzegovina, as recognised by all political party leaders and members of the Presidency. And EULEX Kosovo continues to this day to support rule of law institutions at the request of authorities in Pristina.

We need to recognise that we do face challenges in crisis management. But each time that we took risks and engaged we have made a positive difference on the ground.

Each case is different and we also need to recognise that we do face challenges in our crisis management. Sometimes this is due to under-resourcing of the missions and operations; sometimes to the political context in which we operate – and sometimes the two are connected. There is always room for improvement and the Strategic Compass has opened the way to enhance the effectiveness of our missions. However, it is equally important to state that each time that we took risks and engaged, adapting to challenging circumstances, we have made a positive difference on the ground.

The speed at which the world is changing is often exceeding our capacity to cope. We need to become more agile and have a strong capacity for doing lessons learned, including in the field of security and defence.

3. This leads me to the third element: our ability to adapt and draw the right lessons. The speed at which the world is changing is often exceeding our capacity to cope. We need to become more agile and have a strong capacity for doing lessons learned, including in the field of CSDP.

Last summer, we had the dramatic withdrawal of the international community from Afghanistan. We said at the time that we needed to understand why, despite the vast resources deployed over 20 years, the results were so meagre. As we recalibrate our engagement in the Sahel in response to new developments, which include the growing presence of Russian mercenaries, we need to ask ourselves: what can we realistically achieve and how? Can we tailor our efforts better to local specificities? How to get more buy-in and ownership? Also, what would be the consequences if we scale back our engagement – for local populations and our own security?

These are difficult dilemmas, which is why we need an honest debate to guide our choices. The Strategic Compass is highly relevant for this debate and it contains concrete ideas and a timeline to enhance our collective impact.

The overall point is clear: in a dangerous world, Europeans must assume their strategic responsibility, both within the EU and NATO – and give themselves the means and agility to do so.

The sanctions against Russia are working