Why EU-Pakistan relations are so important for us

HR/VP Blog – Last Tuesday we held the 5th EU-Pakistan strategic dialogue. With the prolonged and worsening COVID-19 crisis, the fight against terrorism and radicalisation, and the growing international tensions in the region and worldwide, it is more important than ever for the EU to deepen its ties with a country like Pakistan. 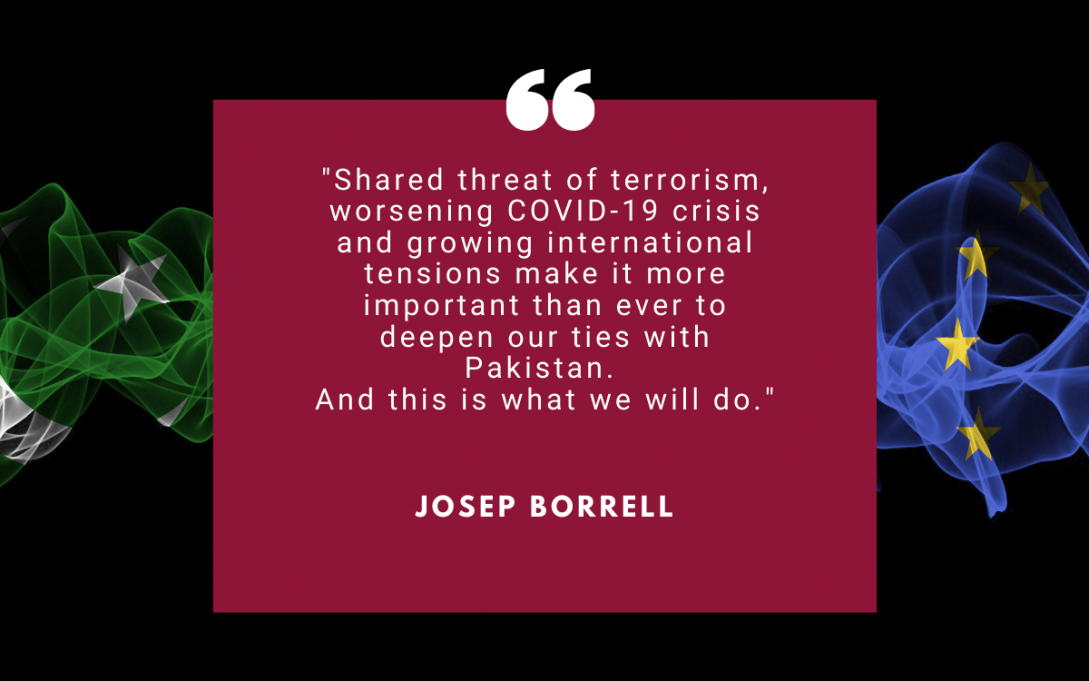 Last Tuesday, I met via VTC my Pakistani counterpart Makhdoom Shah Mahmood Qureshi, Minister for Foreign Affairs. He represents a country of 220 million people, making it one of the world’s major Muslim-majority countries. Pakistan possesses nuclear weapons and plays a central role in a critical region involving China, India, Iran and Afghanistan. In the current circumstances, EU-Pakistan relations are a very important issue for us.

Pakistan is also an extremely young country: more than half its population is under 30 years old. However, it faces major difficulties in creating sufficient jobs for this large number of young people. And these difficulties have been further aggravated by the Covid-19 pandemic and its consequences. These long-standing problems contribute to persistent social and political instability, as well as strong religious tensions, even though the country has managed to put an end to the military dictatorships to which it was subjected for several decades.

“I expressed my deep concern about the disinformation about the situation of Islam and Muslims in Europe that we have observed in many parts of the world, including Pakistan.”

We have of course discussed international terrorism and the attacks that have taken place in Europe in recent days. I expressed my deep concern especially about the disinformation about the situation of Islam and Muslims in Europe that we have observed in many parts of the world, including Pakistan. I also expressed my concerns about the use of the death penalty in Pakistan and the abuse of the Blasphemy Act, while welcoming the forthcoming adoption of a law against torture. My Pakistani counterpart, for his part, underlined the concerns raised by the resurgence of what he described as “Islamophobic acts” in Europe. He told us that these acts had deeply hurt Muslims around the world, and particularly in Pakistan.

“The EU model based on the freedom to believe or not and the freedom of expression is often difficult to understand for societies that have different values and systems.”

We had a frank discussion on these sensitive issues. The EU is based on a model of a secular society, where individual rights and freedoms are central and where public authorities respect the freedom of everyone to believe or not, and the freedom of expression, including on matters related to religion. This model is often difficult to understand for societies that have different values and societal and political systems.

Exchanging on these difficult issues, we both agreed in condemning all violence and the killing of innocent people, and reaffirmed our joint determination to defend and strengthen human rights and fundamental freedoms and to promote tolerance and coexistence between different religious faiths.

“We agreed to condemn all violence and the killing of innocent people, and reaffirmed our joint determination to defend human rights and promote tolerance between religious faiths.”

Related, we continued our discussions on counter-terrorism issues, and in particular on the measures foreseen by the Financial Action Task Force (FATF). This 200-country intergovernmental organisation has established international standards to combat money laundering and terrorism financing. We took stock of significant progress made in addressing 21 out of 27 items of the Pakistani action plan. At the last review of the FATF, the EU had advocated for a positive tone of the statement on Pakistan. I asked our interlocutors to complete quickly its implementation and offered EU technical assistance. More broadly, we will hold in 2021 the first meeting of the EU-Pakistan Security Dialogue foreseen in our 2019 Joint Strategic Engagement Plan.

Economic relations have also been an important part of our exchanges, even more so as the consequences of the COVID-19 crisis are heavily affecting the region. We have spent €150 million in assistance to Pakistan in response to the COVID-19 crisis. The EU is also the country's second largest trading partner, with 35% of Pakistan’s exports going to Europe. Pakistan benefits from the European Union's General Scheme of Preferences (GSP+). GSP+ removes import duties from products coming from vulnerable developing countries, to help them alleviate poverty and create jobs based on international values and principles. To qualify, these countries have to implement 27 international conventions related to human rights, labour rights, the protection of the environment and good governance. Currently 60% of products imported into the EU under this customs regime come from Pakistan.  We are exploring ways of making full use of this regime to alleviate the effects of the COVID-19 crisis.

“The EU advocates the full implementation of the Debt Service Suspension Initiative by all creditors, including China, and encourage the G20 to go further on the debt issue.”

Pakistan should also fully benefit from the Covid-19 related Debt Service Suspension Initiative (DSSI) decided by the G20. It is one of the countries in the world with the highest ratios of external debt to trade according to World Bank data: in 2018, Pakistan's debt stock represented 211 per cent of its trade. I confirmed to my interlocutor that the EU advocates the full and transparent implementation of the DSSI by all official creditors, including China, which is a major external lender to Pakistan. We encourage also the international community to take further steps on that issue.

We need to cooperate on climate change

Pakistan is also one of the countries in the world most affected by climate change. The Indus River is the key water artery for its agriculture and economy, but with its sources in the Himalayan triangle between India, China and Pakistan, it is quickly becoming a major point of tension in regional climate geopolitics. We hope to develop our cooperation with Pakistan on energy and climate related issues and count on Pakistan to help enhance the commitments made by the different countries in the framework of the Paris Agreement next year.

The difficult way ahead in Afghanistan

Finally, we of course discussed at length the security situation in the region, and in particular in Afghanistan. We agreed to provide strong support for an Afghan-led and Afghan-owned peace process and welcomed the progress made in the last two years, in particular the signature, in February 2020, of an agreement between the US and the Taliban. We are well aware of the difficulty of the task remaining and the obstacles still to overcome, which the latest deadly attack on the University of Kabul has just highlighted.

Foreign Minister Qureshi expressed Pakistan’s concerns about human rights violations by India in the region of Jammu and Kashmir, and its attempts to change the demography of the disputed territory. As EU, we are following the situation in that region closely and I underlined the need for restraint, a de-escalation of tensions and the resolution of the dispute through dialogue and diplomatic engagement.

Indeed, with the shared threat of terrorism, the worsening COVID-19 crisis in Europe and around the world, and the growing systemic rivalry between China and the United States, it is more important than ever for the EU to deepen its ties with a country like Pakistan, crucial for regional stability in South Asia. And this is what we will do.