HR/VP Blog – This week, I visited Jakarta, for talks with the leaders of Indonesia and ASEAN. A main reason of this trip was to signal EU engagement with this dynamic part of the world, towards which the global centre of gravity is shifting. My discussions proved there is clear demand in the region for more EU engagement and presence: on the pandemic, for recovery, for connectivity and in the area of security. 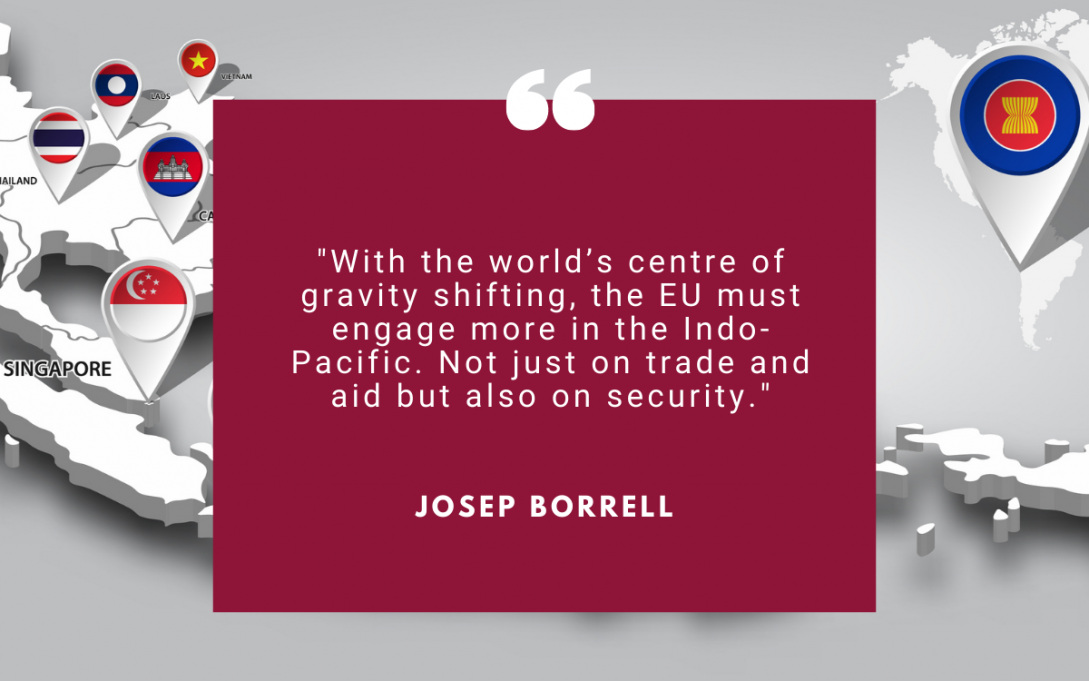 There is an impression sometimes that Europe is self-absorbed and mainly focused on crises in our neighbourhood. However, we have big stakes in the Indo-Pacific and have been a major player there for years. Our partners look to us to work more closely together.

"If we want to be a geopolitical actor, we also have to be perceived as a political and security actor in the region, not just as a development cooperation, trading or investment partner."

To start with, some basic figures. The Indo-Pacific creates 60% of global GDP and two-thirds of global growth. It is the second largest destination for EU exports and home to four out of the top ten EU trading partners. Around 40% of the EU’s foreign trade passes through the South China Sea, so Asian security has a direct impact on European security and prosperity. The EU is also the top investor and development assistance provider for the Indo-Pacific. But if we want to be a geopolitical actor, we also have to be perceived as a political and security actor in the region, not just as a development cooperation, trading or investment partner.

My visit had two main components: to meet with Indonesian leaders and visit the ASEAN headquarters.

The EU and Indonesia are long-standing and close partners for 30 years. We share common values and our ties are strong, but there is much untapped potential. Indonesia has 270 million people, who are rightly proud of their democratic transition. It is an enormous archipelago with some 17,000 islands and if you put it on the map of Europe, it stretches from Dublin to beyond Moscow. It has a fast-growing economy, plays a key role in ASEAN and as global actor, and will hold the 2022 G20 Presidency and the 2023 ASEAN chairmanship.

I met President Joko Widodo, Foreign Minister Retno Marsudi, Minister of Defence Prabowo Subianto, and members of the Indonesian Parliament. In all my discussions, I was impressed by the clear goals leaders have for the future of Indonesia and the region – and how much they want implement them by cooperating with Europe.

Unfortunately, over the past three years, our relations stagnated because of a dispute over palm oil exports, but we cannot let these differences hijack our relationship. We are fully aware of the importance of palm oil production for Indonesia and its crucial role in lifting many Indonesian smallholders out of poverty. The EU is not anti-palm oil. We have not instituted any trade ban and the value of Indonesian palm oil exports to the EU has even increased by 26% in 2020 compared to 2019. We remain of Indonesia’s largest export market for palm oil and the recently launched Joint Working Group will help all sides to understand each other better when it comes to the sustainable production of palm oil.

Naturally, the fight against the pandemic and access to vaccines was another key topic. I was glad to point out the EU solid record on vaccine multilateralism: we have supported COVAX with €2,8 billion, exported 240 million doses to 90 countries and we are working to build new vaccine production capacities world-wide.

The EU supports Indonesia’s objective of becoming a high-income country by 2045, while realising the 2030 SDG goal. Our future CEPA/Free Trade Agreement will support that goal by generating more trade, more European Foreign Direct Investment and jobs - no less than 5bn EUR of GDP could be generated annually from 2032. We will continue to build a partnership for green growth – without the EU erecting a green wall as some falsely claim.

Finally, security will be increasingly central in our cooperation. Indonesia is a force for peace and stability in the region and globally. The EU’s strategy for the Indo-Pacific fits very well with Indonesia’s efforts and policy aims. Indonesia, despite certain problems, can be a model in the region regarding democracy, pluralism and tolerance.

"ASEAN is the nucleus around which inclusive forms of regional cooperation are built. Regional integration is a way to safeguard our respective ‘strategic autonomy’ for both of us."

The second element of my visit was ASEAN, a natural partner for us, given our shared commitment to rules-based multilateralism. Currently, ASEAN is a bit like the ‘swing state’ in the wider Indo-Pacific where US and China are throwing their weight around. ASEAN countries are united by their wish not to be cajoled by US-China strategic competition. They wish to diversify their partnership away from just the Quad or Sino-centric groupings. ASEAN is the nucleus around which inclusive forms of regional cooperation are built. Regional integration is a way to safeguard our respective ‘strategic autonomy’ for both of us.

Last year we upgraded our relations to a Strategic Partnership. This was long overdue but very welcome because in a world of power politics and generalised uncertainty, ASEAN and EU should pull together.

There are many areas where our cooperation is already strong. We have long been ASEAN’s number one development partner, but are also its third trade partner, and third investor. Our exports to ASEAN countries grew from €54 billion in 2010 to €85 billion in 2019 and our imports grew even more, from €72 billion in 2019 to €125 billion.

In my discussions with ASEAN’s Secretary General and its Committee of Permanent Representatives (CPR), I stressed the readiness of the EU to expand cooperation especially on the green transition, sustainable connectivity and defence.

"The Indo Pacific region is the future, but insecurity and tensions are rising, threatening the order and balance of this dynamic region."

I was also glad to have the opportunity to set out the EU’s new strategy on the Indo-Pacific at the Centre for Strategic and International Studies. To explain what we are doing and why – and where we want to go next.

The Indo Pacific region is the future, but insecurity and tensions are rising, threatening the order and balance of this dynamic region. And economic growth rests on openness, on stable and shared rules and shared security.

I stressed that the EU’s interest is precisely this: that the regional order stays open and rules-based – and we can contribute significantly. As I witnessed during my visit, this  is recognised by our regional partners who view the EU as a trusted and reliable actor.

The ISEAS research Institute in Singapore recently asked opinion-leaders and policy-makers in Southeast Asia who would be their most favoured and trusted strategic partner amid the growing US-China rivalry. Four in ten of the respondents picked the EU!

The basic message behind our Indo-Pacific strategy is that the EU wants to step up its engagement and work with partners to boost trade and investment, economic openness and a sustainable approach to connectivity. But we are also ready to do work more on strategic and security issues, in particular maritime security. We are exploring options to enhance EU’s maritime presence in the vast Indo-Pacific space. And we will extend the EU’s Critical Maritime Routes project from the Indian Ocean to South East Asia.

"On Connectivity, we have a strong record and know that our approach, namely that connectivity projects must be sustainable in environmental and fiscal terms, matches what ASEAN and other partners also want."

To summarise, I return from the region with  three main thoughts:

First, the visit was a tangible way to show the EU’s political will to engage with ASEAN. That is why I blocked my agenda for four days and travelled more than 22.000 km. It was useful to talk face-to-face and address misperceptions, be it on palm oil or vaccines and present concrete proposals to deepen our cooperation.

Second, I am even more convinced than before that the EU must engage more in the Indo-Pacific. Not just on trade and aid but also security. In Europe, we are often too busy with ourselves and our neighbourhood, and sometimes we have too little bandwidth left for developing relations with countries who want more from us. However, the world will not wait for us to overcome our internal problems. We need to engage now and it is refreshing and positive to hear how much the EU is wanted and welcomed. Of course cooperation must be two-way street. The more cooperation is seen as two-way, the more sustainable it will be in our respective political systems.

Third, we have to step up cooperation to respond to the ongoing ‘democratic recession’ worldwide and the growing attacks on pluralism and political freedoms. Myanmar is the most dramatic case in South-East Asia. I stressed that we expect ASEAN leadership in this situation and that we are ready to back more regional engagement. I clearly expressed to the CPR Ambassador of Myanmar what Europe expects. Given the complete refusal by the military leadership to engage in negotiations and growing repression, we are working on the adoption of a new sanctions package to defend human rights. Not because we see these as European or Western constructs. But because these values and principles are universal. Many countries and certainly the people in this region share our view: they want to determine their own political future and have their rights protected.