“What is the difference between getting an information and making an enquiry?” asks EU expert Sophie Vissy, from EUCAP Sahel Mali to the 16 Burkinabe gendarmerie and police officers attending the “Judiciary police”, training course held in Ouagadougou from 29 August to 9 September. Three women (two from the gendarmerie, one from the police) participated in the course. 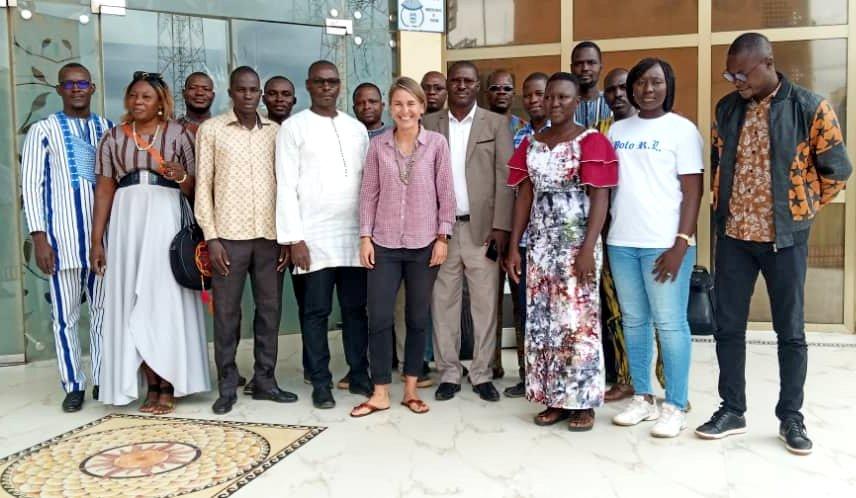 The activity, organised by the RACC in cooperation with the Burkinabe authorities and the participation of a trainer from EUCAP Sahel Mali, included subjects such as the role of the Judiciary Police, cyber-criminality, money laundering, connections between terrorism and organised crime, gender-based violence and gender.

Importantly, the course generated exchanges of view and stimulated cooperation between police and gendarmerie officers in Burkina Faso.

According to Pélagie, who is a 41 Sous-lieutenant in the police, and one of the female trainees, this course is going to make a difference in her everyday work. Pélagie works in fact in a Regional Brigade dedicated to the protection of vulnerable people, namely women and children. She says she has gained a lot more knowledge on subjects related to her job, including on gender.

Her colleague Mamina, who serves at the Gendarmerie Brigade of Tanginin Dassouri, agrees with Pélagie, and adds that the part she benefitted the most was learning about cyber-criminality, stressing that on this subject there is a lack of skills and means in Burkina Faso. For Edwige, the other woman trainee who works at the Departmental Gendarmery Group, this course was a first approach to Judiciary Police, and she now realizes this is a subject to further explore.

“As women we are not deployed in the field as much as our male colleagues, but since it is important to focus of human rights, it would be important to have more women officers on the ground”, adds Pélagie, explaining that this is important to guarantee the respect of human rights (for example the right of a woman to be searched by another women), but also as a mean of being more effective in terms of investigating crimes. Criminals in hide can be approached by undercover agents, if we include women we have more possibilities of success on operations of such kind, explains, in summary, the police officer.

At the margin of the course Sophie Vissy remarked: “When I arrived at EUCAP Sahel Mali almost two years ago, I did not expect to live such an enriching human experience. Thanks to the RACC, I already had the opportunity to participate in a training in the field of the Judicial Police in Mauritania last year, and now this one in Burkina Faso. Especially the latter was a real sharing experience with the trainees: a real osmosis between all of us was created from day one”. On the occasion of the closing ceremony, Sophie added: "I will leave Ouagadougou enriched by this experience, and I hope that the trainees will keep good working practices and techniques for their future missions".

Everyone in the class agreed that more training course on Judiciary Police are needed, and with the inclusion of a higher number of Burkinabe officers, both from the gendarmerie and the police. Sahelian and European working together for a common goal makes sense to all the participants, and makes them stronger in the fight against terrorism and organised crime.

The need for safety and security is in fact important for people in the Sahel, as in Europe.