The EU Delegation to the UN in Geneva jointly with the Special Rapporteur on Freedom of Religion or Belief and the World Council of Churches organised today an event on "Religion and Religious Freedom in International Diplomacy". The aim of the event was to address the role of religious literacy and freedom of religion or belief in international diplomacy and foreign policy. 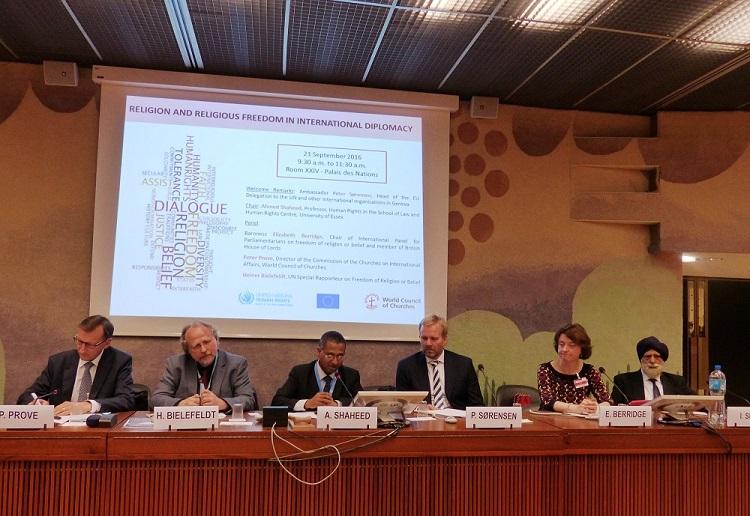 "Freedom of religion or belief is a high priority under the EU’s human rights policy," explained Ambassador Peter Sørensen, Head of the EU Delegation to the UN in Geneva. "The EU defends and promotes the principled position that freedom of religion or belief is a fundamental right to which everyone is entitled, everywhere," he added. Making reference to the EU Guidelines on the promotion and protection of Freedom of Religion or Belief he underlined: "The EU is committed to promoting a human rights approach based i.a. on the principle of equal promotion and protection of all human rights, including freedom of religion or belief and freedom of expression, in all their aspects. Actions in this field should be strongly anchored in the human rights framework.  But legislation alone is not enough. We believe that a comprehensive approach is needed, including preventive measures, dialogue, education, promotion of tolerance and pluralism."

Baroness Elizabeth Berridge, Member of the British House of Lords, described her work as Chair of the International Panel for Parliamentarians on Freedom of Religion or Belief, an informal network of parliamentarians and legislators from around the world. Lord Indarjit Singh, Member of the British House of Lords, made the point that "marginalising religion doesn't do any good at all, as they become unknown. It is difficult to trust your neighbour if you are not familiar with his religion."

"Religious diversity and religious minorities are crucial for healthy and sustainable societies" underlined Peter Prove of the World Council of Churches, adding that it is important to bring the situation of religious minority communities to the centre of international affairs, acknowledging the equal rights for all.

As the final speaker of the panel, Heiner Bielefeldt, UN Special Rapporteur on Freedom of Religion or Belief, underscored that "freedom of religion doesn't protect religion, but it protects human beings." Specifying that "the whole purpose of freedom of religion is creating space in which diversity can unfold freely."

The panel debate was moderated by Ahmed Shaheed, Professor of Human Rights at the University of Essex. Professor Shaheed has been appointed new Special Rapporteur on Freedom of Religion or Belief. He will hence succeed Professor Bielefeldt in this mandate, which was prolonged in March 2016 by an EU-led resolution at the Human Rights Council.